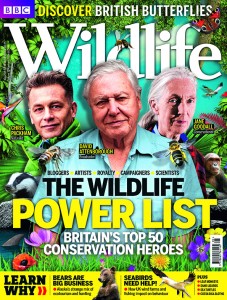 The BBC Wildlife Power List is being talked about wherever I go – well, not in the Post Office, or the supermarket, or the garage… But talked about by the nature conservation community? It certainly is!

Thanks very much to Ben Hoare for his Guest Blog on the subject on Tuesday – some interesting points made there.

But let’s be honest, it’s who isn’t there that is most interesting isn’t it?  I was told by the spin doctor of one large wildlife NGO that, of course, no-one takes these lists very seriously, and, of course, one doesn’t – provided one is on the list. It’s a little bit like a conversation I had with John Krebs about 30 years ago when a colleague and I had had a really good (in our opinion) paper on Great Tit memory of songs rejected by the journal Nature. John said to me that getting published in Nature was a bit of a lottery and it wasn’t always the best papers that made it into what was at the time regarded as the world’s ‘top’ science journal. I thanked him for trying to make me feel better but said it was easier for him to say that after having published loads of papers there than it was for me having a zero-for-one record. The spin doctor’s Chief Exec wasn’t on the Power List.

The Chief Execs of the National Trust, Wildlife Trusts, RSPB, WWF and many smaller NGOs are not on the list. And few of these organisations have any representatives.  Must mean something?  I think that the senior members of some NGOs suffer from the same problem as many senior members of the Labour Party (first, they aren’t in power!) – and that is that they seem to be speaking a language unknown to normal people. It’s all about aspiration, well-being, narrative and pride in the past, and a little too little about taking us forward with enthusiasm to a better future by a well-developed plan.

Come to that, the Chief Execs of Natural England and the Environment Agency aren’t there either, and nor are their Chairs. If this list had been compiled 30 years ago there would have been quite a few NCC names, and ITE names, in such a list. It’s a sign that the statutory agencies are no longer seen as a powerful force for good. Because they aren’t, are they? Where are the Derek Ratcliffes, Martin Doughtys, Barbara Youngs, Andy Browns and many many more junior staff of the past, in the wildlife Power List of today? They are absent from the list, because if they exist in real life, they remain very well hidden.

And no civil servants – although the aim of a civil servant is not to be noticed, I can think of times when there were such good individuals that such a list would have wanted to recognise them. 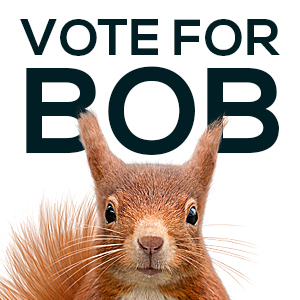 And no-one from GWCT, BASC (both of whom have C for conservation in their titles), the Moorland Association, the NFU or the CLA. Not even a token member to show how much we love them, and how much we have in common; none.

And captains of industry? Nope!

I was very pleased that both Caroline Lucas MP and Zac Goldsmith MP were listed – and maybe a case could have been made for a Labour MP but then again, maybe not after the Labour manifesto was so wildlife-light.

Crikey! Nature’s in a bad way if its most noted champions are a few bloggers, authors, activists, media personalities, scientists and kids isn’t it?

But, luckily, once the many almost-powerless gather together, then they have considerable power. Several of us on the Power List see it as our mission to try to mobilise and energise the millions who care about wildlife with a deep passion. NGOs should be doing more in that direction too – I wish I had a million or so subscribers to my blog!

I notice that Bob didn’t get elected by the way – did he keep his deposit?

You are the wildlife Power List – you are the power.