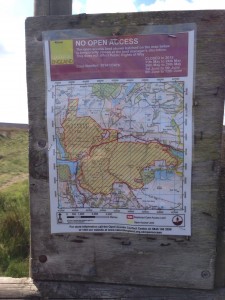 Sometimes I’m busy, and sometimes I let things slip, but I usually come back to them with terrier-like tenacity.

Using the hopeless GOV.UK site I found it impossible to understand how I could discover whether open access land, such as that depicted on this sign in the Peak District, would be closed or open a few weeks ahead – to plan my walks and holidays properly.

I ‘phoned the NE Open Access Contact Centre on the number given at the bottom of the sign illustrated here and spoke to a couple of helpful staff who couldn’t tell me whether the land in question would be closed for grouse shooting at any time during the grouse shooting season. Nor could they tell me whether or not it was possible that it might be closed, although they sort of suggested that maybe it could be and I should keep checking the website right up until the few days before I wanted to set foot on this open access land.

In response to my blog on the subject of a week ago, two NE staff posted comments. Neither answered the question about possible closures during the grouse shooting season though maybe I am supposed to infer that the land might be closed for safety reasons if people are killing wildlife in this part of the National Park on any particular day. One of them emailed me and copied in someone from the Peak District National Park who might be able to help me. They haven’t helped me yet – they haven’t been in touch yet.

So it seems that the way that a member of the public finds out about access to open access land in a National Park is to see a sign, then phone Natural England (twice), then write a blog, then read the comments from NE staff (which don’t answer the specific questions) then hope that someone else in the PDNP might get in touch, then write another blog and then email the PDNP directly to ask the same questions over again – and after you have done all that, you still haven’t got an answer.

I suspect that as a taxpayer and member of the public I am not the type of stakeholder that NE is now set up to deal with.

Is NE fit for purpose?

And I’m still not sure whether all or some of the land in question on that noticeboard is NT land or not. Perhaps they would like to tell me how I open a dialogue with them over my access, as a NT member, to their land in a National Park, which is used for grouse shooting.