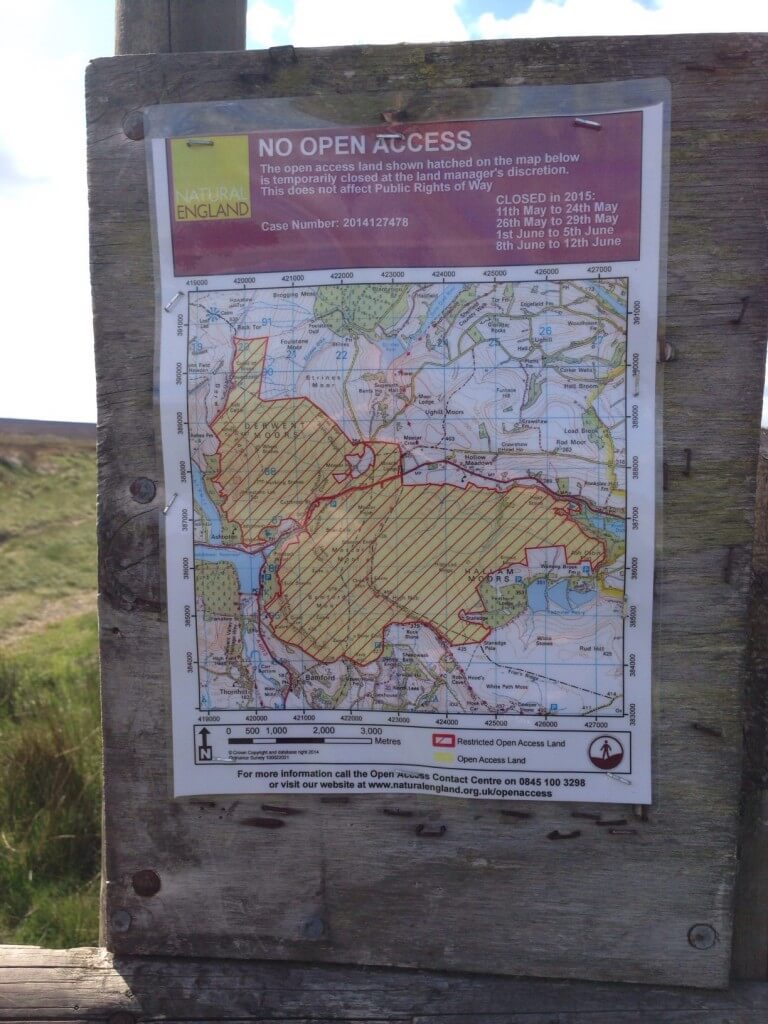 Members of the ‘Sodden 570’ at last year’s Hen Harrier Day event in the Upper Derwent Valley will recognise this area  – we were getting soaked just off the left hand (western) side of the map on 10 August last year.

The Countryside and Rights of Way Act provided open access to open ground (in England) such as moorland – such as that moorland in the Peak District featured on the map.

However, as I understand it, and I am no expert, land managers can apply for closure of the land for specific reasons – perhaps because they are shooting Red Grouse on particular days. In addition, as I understand it, they can close the open access for four weeks without giving any reason. This seems to be what has happened on this piece of land in the Peak District for most days in May and many days in June. You were allowed access on the last Bank Holiday Monday though!

I looked at the website and discovered that the Derwent Moors were indeed closed for the dates shown on this sign, and that I couldn’t take my non-existent dog off the rights of way, but I couldn’t see whether there were going to be occasional days of grouse shooting on what I believe to be a grouse moor.

So, and you might have guessed this, I ‘phoned the Natural England number and spoke to the Open Access Contact Centre (0845 1003298).  The couple of staff there were as helpful as anything but I’m still a bit perplexed.  Having used up the 28 days of closures which are the land manager’s discretion, it is unclear to me whether the moors can be closed on any further dates, for example for grouse shooting between 12 August and 9 December. The NE staff couldn’t tell me whether there was the possibility of further closures whilst lead is whistling around the moors or not. And it’s worse than that (although not their fault, obviously (obvs!)), they said that if there were any further closures they might be made with only five working days notice. This makes it very difficult for me to plan my weekend or autumn short break in a National Park to enjoy the scenery and wildlife because I might book my B&B on the Friday and find the next Monday that the area I want to walk is closed at the weekend.

So, in planning my walk across the Derwent Moors – or maybe any other moors – I am completely at a loss to know whether I am safe to book my accommodation and travel north or whether I might find the place shut when I get there, or discover after I’ve booked my trip that the moors will be shut on the dates of my visit.  The NE staff were very helpful, and I admitted to them that I worked for the RSPB when the CROW Act was being made law so maybe it was more my fault than theirs, but it isn’t a great system. Or at least it seems not to be if I have understood it correctly.

This looks to me like it is the land owned by the National Trust and managed for grouse shooting (I might be wrong – who can tell me, please? [Note added later – see comment below on this blog. I am told that this is not NT land. Apologies. The general point remains though; this is land in a National Park]). National Trust members, like myself, aren’t getting much value for their large annual subscriptions in areas like these if such closures are common. And this is in a National Park remember – set up to protect and enhance natural beauty, not for industrialised game shooting and ‘vermin’ control.

Maybe the NT would like a Guest Blog here to update us all on how they are progressing with their excellent High Peak vision?

Maybe NE would like to put me straight on how I plan my walks in the English uplands during the grouse shooting season? Or maybe that is a job for Defra to explain?

If the Moorland Association would like to clarify this matter that would be good too. Do they have a code of conduct for their grouse shooting members about informing the public about closures sufficiently far ahead to minimise inconvenience?  What is that code of conduct, please?

And I do wonder why we are allowing driven grouse shooting in National Parks anyway.