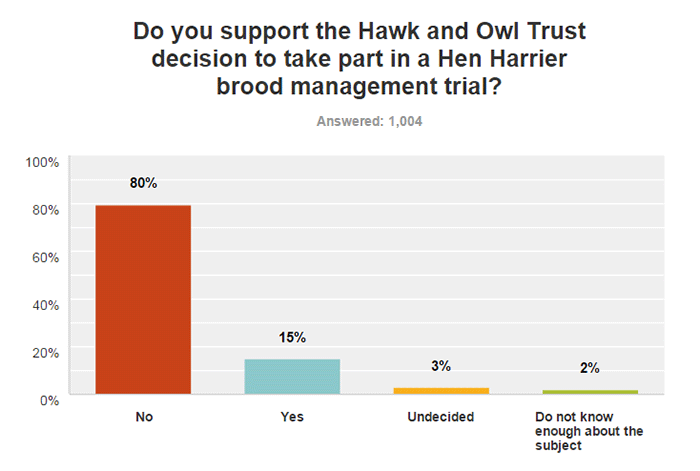 A poll organised by Rare Bird Alert (click here) which is essentially a repeat of a similar poll of over 6 months ago, suggests that birders (and others – for the poll was open to anyone) have set their faces more firmly against brood management as they have learned more about it. This is a triumph for the power of shining a light into a dark corner and a vote of no confidence in the Chair of the Hawk and Owl Trust from the birding community.

Four out of five people who responded to the poll opposed the Hawk and Owl Trust’s position.  The % of respondents who felt they needed to know more shrank and recruited to the ‘No’ position, as apparently did a few folk who might have voted ‘Yes’ last time around. And the poll had over a 1000 respondents this time, compared with over 750 last time around.

There is not a shred of comfort to be gleaned from this poll for the adherents to, and proponents of, the ‘brood management’ approach to Hen Harrier conservation.

Defra should simply kick this idea into the long, long, long grass, but if they have any thought at all of adopting brood management as a trial then they should certainly consult on it in detail before any action on the ground takes place.  Although this poll was conducted by a bunch of birders there was no prior expectation that birders would necessarily reject the H&OT proposition – it’s just that they weren’t convinced having listened to the arguments. And, in fact, I am wrong to describe the respondents as birders, the poll was open to all – open to the members of BASC, the Moorland Association, the TGWC, the Countryside Alliance and any one who cared to vote.  Enthusiasm for brood management of Hen Harriers is weak amongst those communities who care about it at all.  The H&OT and shooting organisation coalition couldn’t even get their act together to make a decent showing in this open vote.