Dr Ruth Tingay is a raptor conservationist with field experience from North & Central America, Europe, Africa, Central and SE Asia. She studied the critically endangered Madagascar Fish Eagle for a PhD at Nottingham University and is a past president of the Raptor Research Foundation. She’s currently researching the illegal persecution of raptors & its link with driven grouse shooting in the UK uplands. Here’s her report from the GWCT 10th North of England Grouse Seminar, 17th Nov 2015, Ripley Castle, Yorkshire. 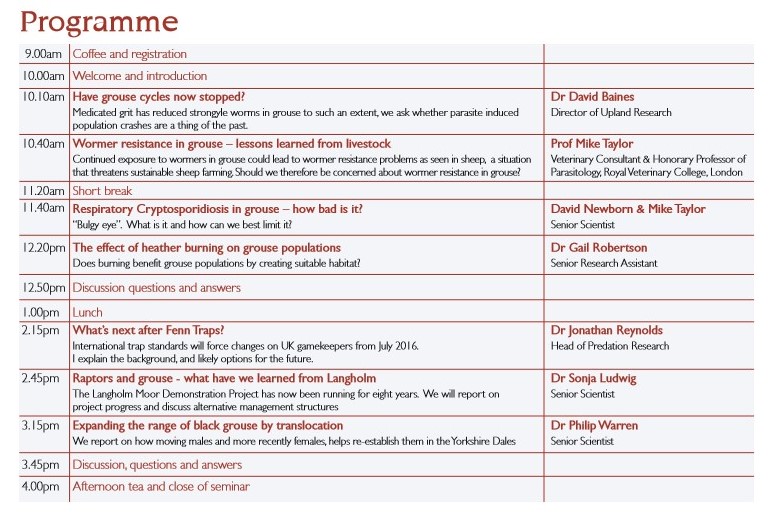 The first speaker of the day was Dr David Baines, GWCT’s Director of Upland Research: Have grouse cycles now stopped? Medicated grit has reduced strongyle worms in grouse to such an extent, we ask whether parasite induced population crashes are a thing of the past.

This talk covered the history of how grouse moor managers have used medicated grit to control Trichostrongylus tenuis, the strongyle worm that causes cyclical 4-5 year population crashes in red grouse. Incidentally, the use of medicated grit has recently come under the spotlight after it was revealed that this management practice is largely unregulated and the authority responsible for monitoring its use (DEFRA’s Veterinary Medicines Directorate) has failed to undertake any surveillance whatsoever, for reasons that are barely believable.

David explained that medicated grit was first developed in the mid-eighties, using a veterinary drug called Fenbendazole which was bound to a fat and then coated on to the quartz grit for the red grouse to ingest. He told us how the GWCT had been monitoring the effectiveness of the grit by counting the number of strongyle worms found in the intestines of shot red grouse from sites across the UK uplands. He described the cyclical red grouse population crashes on one moor that hadn’t used medicated grit, over a period of approximately 30 years (mid-seventies to 2008), illustrated by a graph showing sharp rises and falls every 4-5 years. He then compared that with another moor that had been using medicated grit, over a similar time period, and the grouse population crashes were still occurring but with less frequency and less intensity. This was evidence that medicated grit was ‘dampening’ the red grouse cycles, and perhaps even extending them, but not altogether preventing the cycles as some had hoped.

He explained how a new style of medicated grit had been introduced in 2007, following a big red grouse population crash in 2005. Three things changed: the drug Fenbendazole was changed to the closely-related Flubendazole (he didn’t explain why); the old fat layer was replaced with a more durable fat that wouldn’t melt in mild temperatures as the old one had, resulting in the wormer drug leaching away; and a medicated grit box was designed so that the grouse moor manager could regulate the grouse’s access to the medicated grit prior to the shooting season to ensure the grouse weren’t contaminated with the drug when they entered the human food chain.

While the cessation of red grouse population crashes might be welcome news to grouse moor owners looking for an ever-increasing bag size, David was keen to point out that this ‘success’ also brings with it potential problems. He said the biggest potential problem was the continued use of medicated grit when perhaps it wasn’t needed, which could lead to the strongyle worms developing genetic resistance to the wormer drug. He mentioned a couple of studies the GWCT had done (and others that were currently underway) that had already hinted at the presence of resistance, and although not yet at a scale for concern, he cautioned that it was something to watch out for.

He emphasised the need for routine parasite monitoring in red grouse, and only using the medicated grit when it was deemed necessary. He told us about six moors that had undertaken ‘grit holidays’ for between 1-4 years as part of a GWCT trial and how those ‘holidays’ had proven effective, i.e. there’s no need to use medicated grit every single year.

The penultimate part of his presentation went as follows: “I’m not saying we have, but I’m asking, I’m suggesting, that on some places in more recent years we actually have too many grouse and if so, I’m asking the question, if we have got too many grouse, we’ve got to be very realistic about this, can we reduce the numbers naturally? And I’m suggesting that there’s four things that can be done to reduce grouse numbers, which will gain everyone a lot of brownie points because I’m afraid that we do need them. Can we be more tolerant to raptors? Sonja Ludwig’s going to talk on elements of that within her Langholm presentation to you later today.

There’s a lot of noise about impact of heather burning, should we be reducing the amount of burning or even stopping burning on some of these fragile habitats? Again, I’m not saying you should, I’m saying it’s a question to you, which Gail’s going to be giving you more information on.

We’ve been looking at black grouse for a lot of years, Phil’s going to fill you in, talk to you about it later today, but if we’ve got a lot of grouse can we release those moorland margins and do things with other species on them?”

That was only three suggested ways of reducing grouse numbers naturally, not four, but it did whet the appetite for what the other speakers might have to say later on in the day. I was particularly looking forward to hearing how the grouse-shooting industry might be ‘more tolerant’ to raptors.

David’s talk ended with this: “So just to leave you with a summary of what I hope I’ve said, that medicated grit, especially its current version, is well capable of reducing your parasite burdens. We think it’s probably stopped population cycling because there was no crash on medicated sites in 2009, and the crash that we thought would happen was it not for medicated grit, in 2013/14, just simply didn’t. But without these cycles we’re looking to spiral at ever increasing grouse numbers and what I’m saying to you is that, from an environmental perspective, is that we may, I’m not saying that we are, but we may be carrying too many grouse that’s relatively uncomfortable for not only ourselves but other stakeholders in the uplands”.

The next speaker was Professor Mike Taylor, who was billed as follows:
‘Mike is a veterinary graduate with a PhD in parasitology having worked at both the Central Veterinary Laboratory Weybridge, and Central Science Laboratory, York. He is currently an independent veterinary consultant and director of his own company (VPARST LTD) and a visiting professor in Veterinary Parasitology at the Royal Veterinary College, London. He is a recognised European specialist in parasitic diseases having worked on the subject for over 30 years as well as writing 3 textbooks, 20 book chapters and over 200 scientific publications’.

His talk was on wormer resistance in grouse – lessons learned from livestock but unfortunately his voice didn’t project well and it was really difficult to hear what he had to say. The main thrust of his talk seemed to be a technical explanation of the epidemiology of parasites and an overview of the various drugs available to control them. The take home message that I got was that genetic resistance [to wormer drugs] is irreversible; once your worms have developed resistance that’s it, the drugs are powerless against them.

There then followed a fascinating question and answer session which was actually far more revealing than the talks themselves…..to be continued. 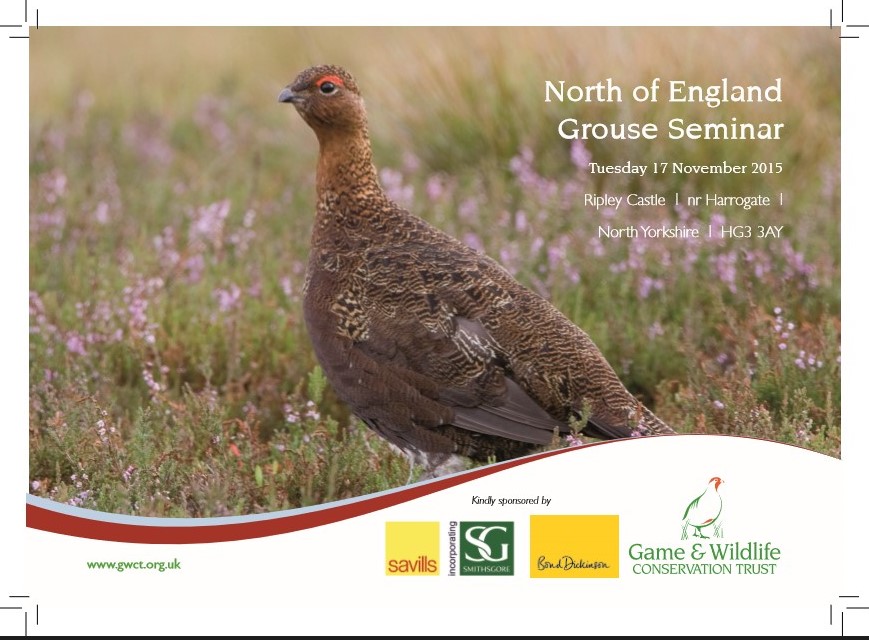