Dr Ruth Tingay is a raptor conservationist with field experience from North & Central America, Europe, Africa, Central and SE Asia. She studied the critically endangered Madagascar Fish Eagle for a PhD at Nottingham University and is a past president of the Raptor Research Foundation. She’s currently researching the illegal persecution of raptors & its link with driven grouse shooting in the UK uplands. Here’s her third report from the GWCT 10th North of England Grouse Seminar, 17th Nov 2015, Ripley Castle, Yorkshire (episode one here and episode two here).

This is the third in a series of guest blogs about the GWCT’s north of England grouse seminar, held on 17th November 2015 at Ripley Castle, Yorkshire.

This one is about a joint presentation given by Dave Newborn (senior scientist at GWCT) and Professor Mike Taylor entitled: ‘Respiratory cryptosporidiosis in grouse – how bad is it?’. However, as before, Professor Taylor’s voice did not project very well and was difficult to hear so this blog is mostly about Dave Newborn’s contribution.

Dave started by telling us a bit about cryptosporidiosis, a disease caused by protozoan parasites. The cryptosporidium species affecting red grouse has been identified as C. baileyi, which causes respiratory cryptosporidiosis. This parasite has been known to infect birds around the globe, although previously it has been almost entirely associated with captive poultry flocks that have been kept at high density, usually for breeding purposes. It’s a relatively novel disease in wild birds and was first diagnosed in wild red grouse from six individuals that had been captured on a moor in Northumberland in the autumn of 2010. Respiratory cryptosporidiosis (‘crypto’ from here onwards) is also known as ‘Bulgy Eye’, referring to one of the most obvious clinical symptoms (swollen eyes). Other symptoms include nasal discharge. Dave told us that the build-up of mucous in the trachea and larynx can be so severe that you can hear heavily infected birds ‘gargle’ as they take off and he said that male birds have difficulty calling when they land.

Following the first diagnosis of crypto in 2010, and a further diagnosis from a moor in County Durham in 2011 and on another moor in Northumberland in early 2012, the GWCT sent questionnaires to the ~150 grouse moors in northern England in autumn 2012 to estimate the geographical distribution of the disease. They received 106 replies and it was apparent that the disease was widespread in the Northern Pennines but less so in the Southern Pennines and the Trough of Bowland. There had been two recorded outbreaks in the Peak District and the North York Moors but these were later considered to be misdiagnosed. Overall in 2012, 45% of the grouse moors in northern England that had replied to the questionnaire reported crypto in their grouse populations and 80% of these were in the Northern Pennines.

Dave told us that crypto had been reported in Scotland for the first time in 2013 (Lammermuirs) and said that “since then we’ve heard of much further outbreaks” although he didn’t elaborate on this.

In 2014 the questionnaire survey was repeated and further increases were documented in the Northern Pennines and the disease had also spread to large areas of the Southern Pennines. Outbreaks in the Trough of Bowland appeared to be static and the Peak District and North York Moors appeared to be clear. The overall incidence of crypto had jumped from 45% in 2012 to 58% in 2014, and 90% of grouse moors in the Northern Pennines were infected. Dave commented: “So, it’s here to stay, it’s spreading, the Northern and Southern Pennine Dales seem to be the areas most heavily affected but it is spread across most of the Pennine chain”.

The next part of Dave’s talk focused on some of the more recent research GWCT has undertaken, including an investigation in to the relationship between high grouse densities and the occurrence of crypto. Their preliminary findings suggest that crypto is more likely to be found on grouse moors with higher red grouse densities than on moors with fewer birds. He also talked about how, in 2014 and 2015, they’d visited several game larders to examine shot birds for clinical signs of crypto (swollen eyes, nasal discharge). He said this had been complicated by the widespread practice of ‘head crushing’ (a method of killing injured birds) which obviously would not help the identification of the clinical symptoms and could lead to an under-estimate of occurrence. To counter this, they’d been catching red grouse at night on several moors and examining the birds for clinical symptoms of crypto, and comparing these results with those found in the game larders on the same estates. On one site there was a noticeable difference (more crypto-infected grouse seen in the night catches than seen in the game larder at the end of the day’s shooting), leading him to conclude that under-estimation was indeed an issue if relying solely on data collected from game larders.

He also explained that the birds that been caught at night had also been radio collared (presumably under licence!) to enable studies on survival and productivity. In 2013 and 2014 they’d radio collared 104 crypto-infected birds and 62 non-infected birds. They found that almost twice as many non-infected birds were being shot, and he suggested that some of the crypto birds were so heavily infected they weren’t able to fly as far as the grouse butts, which again supported his theory that just relying on clinical symptoms of birds in the game larder was an unreliable indicator of the prevalence of crypto within a population.

The radio-tracked birds also revealed that the six month survival rate for crypto-infected birds was only 37%, compared with a 71% survival rate for non-infected birds. These figures obviously excluded birds that had been shot and also any bird that had died within two weeks of being radio collared. Studies looking at productivity showed that crypto-infected red grouse laid 13% fewer eggs and produced 43% fewer chicks. So not only is crypto having a significant impact on red grouse survival, it is also affecting productivity. 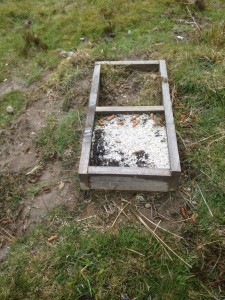 Dave’s talk ended with some results that he’d only received from the lab a few days prior to the seminar. GWCT had collected faecal material and grit samples from medicated grit boxes known to have been visited by crypto-infected grouse. The laboratory analysis had shown the presence of crypto oocysts in these samples, thus confirming the suspicion that medicated grit boxes are playing a role in the transmission of the disease between birds. He emphasised the need for scrupulous grit box hygiene as a way of subduing disease transmission, especially as there are currently no drugs available to treat crypto in red grouse.

A short Q&A session followed but it was difficult to hear so isn’t reproduced here, other than to mention the GWCT is now moving away from the double-sided grit boxes and is recommending that single trays are used for medicated grit. They suggest that non-medicated grit should be placed directly on the ground (rather than in the other side of the box) and not directly in the areas where the medicated grit boxes had been.

I was appalled to learn how quickly this disease had spread within the space of four years. Although it isn’t yet known from where the parasites originated (apparently no known outbreaks in pheasants or red-legged partridges in the vicinity of infected moors), the strong correlation between high-density red grouse populations and the occurrence of cryptosporidiosis is evidence of this being a problem of the grouse shooting industry’s own making. Their insistence on managing moors (predator control, heather burning & parasite control) with greater intensity to produce an ever-increasing bag size can only perpetuate the crisis. I recently read a paper authored by GWCT staff (Baines et al 2014), partially available here, that Mark blogged about last year. This paper reported post-breeding densities of 200-500 red grouse per km2. It also reported that 20,000 red grouse had been shot on one North Pennine moor in 2012. That’s a ridiculous amount of shot birds, and this was estimated to be only 33-50% of the pre-shooting season population size. With these figures it’s really no surprise that a disease previously associated with high-density captive poultry is now rampant on so many intensively managed grouse moors.

Crypto may be spreading to different regions via several routes, including natal dispersal of young grouse and the unwitting transfer of crypto oocysts on vehicles, footwear, dogs and sporting equipment as guns move from moor to moor during the shooting season. At a more local scale it’s been argued that the spread of disease within a moor may be exacerbated by driving the birds 1-2km towards the grouse butts on shoot days (thus ‘mixing’ birds that would normally remain fairly sedentary within their own territories). We also now know from Dave’s presentation that medicated grit boxes are an additional source of contamination.

Although C. baileyi is not known to transfer to mammals (including humans), it is highly contagious amongst birds and it’s worrying to note that crypto symptoms have already been recorded in black grouse, a species of conservation concern known to share habitat with red grouse.
So far I’ve heard/read of three suggestions to minimise the spread of crypto on grouse moors. One is to increase biosecurity measures (e.g. boot scrubbing, vehicle tyre disinfecting etc), especially if guns are moving between moors to shoot. Another suggestion is increased grit box hygiene (as mentioned by Dave), and the third is to increase the number of gritting sites on a moor, presumably to ‘dilute’ the potential for contamination. To my mind this last suggestion may have the opposite effect, given how highly contagious crypto is. Rather than reduce opportunities for contamination it could actually increase opportunities for disease spread. 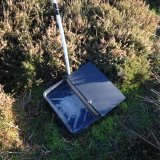 One suggestion I haven’t heard is to eliminate gritting stations altogether. The sole purpose of these is to provide medicated grit (a highly questionable practice in itself – see here) to control the parasitic strongyle worm, to prevent the 4-5 year cyclical boom and bust population crashes in red grouse. Why can’t the grouse shooting industry accept these natural cycles and make do with fewer birds to shoot in some years? They’ll argue that a grouse moor is economically unviable if large numbers of grouse are unavailable to shoot, but if that’s the case, then the sport of driven grouse shooting is unsustainable in its current form. But then we already knew that. The rapid and uncontrollable spread of cryptosporidiosis is just another element of an industry that is wreaking environmental devastation in our uplands.