Dr Ruth Tingay is a raptor conservationist with field experience from North & Central America, Europe, Africa, Central and SE Asia. She studied the critically endangered Madagascar Fish Eagle for a PhD at Nottingham University and is a past president of the Raptor Research Foundation. She’s currently researching the illegal persecution of raptors & its link with driven grouse shooting in the UK uplands. Here’s her fourth report from the GWCT 10th North of England Grouse Seminar, 17th Nov 2015, Ripley Castle, Yorkshire (episode one here, episode two here, and episode three here).

This blog is about a presentation given by Dr Sonja Ludwig (GWCT Senior Scientist) entitled, ‘Raptors and grouse – what have we learned from Langholm?’ The blog has been split in to two parts: this one will cover Sonja’s talk and the next one (later in the week) will cover the question and answer session that followed, during which a bombshell was dropped.

Sonja’s talk began with a lengthy description of the Langholm Moor Demonstration Project, known to many of us as simply ‘Langholm 2’. To save space, I won’t repeat it all here as this information can be read on the project website. The relevant bit was that Langholm 2 has been running for eight of its ten year duration and two of the three main targets had been achieved: 1) Extend and improve the heather moorland habitat; 2) Meet the SPA target of hosting seven breeding female hen harriers. The third main target, to support a financially viable driven grouse moor by killing 1,000 brace of red grouse per annum, has not yet been achieved.

Sonja described the various techniques that had been employed to achieve the first two targets, including the removal of sheep to reduce grazing pressure, a re-established regime of heather burning and cutting, a programme of heather restoration including the re-seeding of areas that had been affected by an infestation of the heather beetle, and the diversionary feeding of hen harriers. She told us that the spring density of red grouse had tripled and there had been an increase in red grouse breeding success, and “limited recovery” of waders such as curlew and golden plover. However, despite all this work, not a single red grouse had been shot. According to Sonja, this was because the post-breeding density of red grouse (as measured in annual July counts) was “only 80 birds per km²” which was low in comparison to post-breeding densities recorded on other English and Scottish moors and “shows that we still have a long way to go before sustainable driven grouse shooting can happen at Langholm”.

I was surprised to hear Sonja comparing this post-breeding density with that of other moors in Scotland and England as justification for not yet shooting at Langholm. Earlier in the day we had listened to two presentations (see here and here) that had shown a strong relationship between excessively high densities of red grouse and disease transmission and we’d heard clear warning that these artificially high breeding densities should probably be reduced. For example, Dave Newborn had told us that in July 2014, the mean post-breeding density of red grouse on 46 moors that GWCT had monitored across the north of England was an incredible 382 birds/km². That’s a hell of a lot of birds in a small area and surely isn’t a benchmark for good practice! 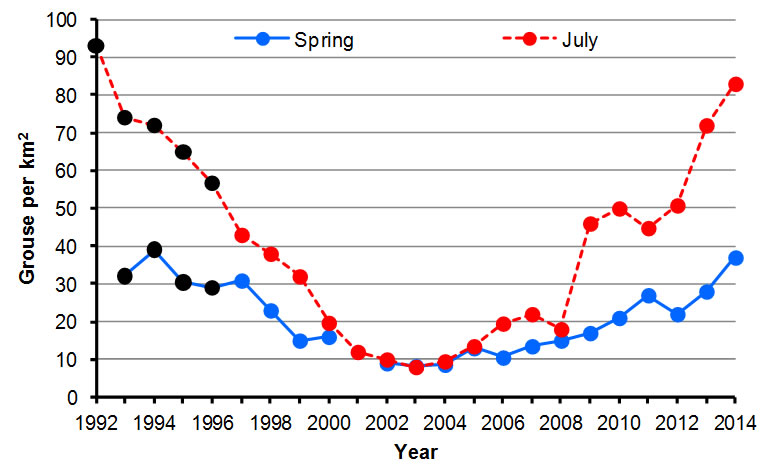 Legend: The mean densities of red grouse at Langholm Moor in spring and July derived from block counts. Black symbols show years in which grouse were shot. Reproduced from Stuart Housden’s blog (23 December 2014)

So why has the target been set at 200 birds/km² at Langholm? It’s almost as if it’s been set ridiculously high to reduce the chance of the project being seen as a success. I’m not the first to point this out – see Stuart Housden’s blog here and Mark’s blog here but it’s worth reiterating again because it’s such an anomaly. The most important thing, though, is that the graph from Stuart Housden’s blog (which is simply a figure from the Langholm 7 Year Review report, redrawn to be clearer) shows that red grouse numbers are recovering at Langholm. They had recovered, in 2014, to densities that had allowed driven grouse shooting in the early 1990s when grouse densities were measured at this site using the same methods. Around 1,500 grouse were shot at Langholm in 1992 – that’s a respectable number worth thousands or tens of thousands of pounds – yet during the current project they decided not to shoot any. How strange.

The next part of Sonja’s presentation focused on what she described as “factors affecting the recovery of waders and red grouse” at Langholm. She said two problems had been identified (for the perceived lack of recovery – although as we have seen, red grouse were recovering and had recovered to shootable levels) and these were (a) low productivity of red grouse and (b) a low annual survival rate of red grouse. She suggested that heather coverage/habitat wasn’t limiting grouse recovery because results had shown that red grouse breed just as well in areas of 20% heather coverage as they do in areas with 80% heather coverage. Then she got to the inevitable issue of predation.

She told us that 90% of the birds that had been found dead (discovered either via radio-tracking efforts or just found randomly) “show clear signs of being predated”. She said that 80% of red grouse found dead in the summer and 65% of those found dead in the winter “show signs of being predated by raptors”. Evidence of fox predation was much lower in both seasons and there was also “the odd road-kill”. Of course, had there been shooting, the winter losses to predators would have been lower in absolute terms, because the losses to men and women in tweed would not have been zero.

She went on, “So basically we can say that the majority of birds seem to be killed by raptors on Langholm, and the problem with this is although we can tell basic field signs that a bird has been killed by a raptor, we can’t tell for sure by which raptor species”.

That’s quite a statement to make. I’d like to know how they determined whether a grouse had been killed by a raptor or whether it had simply been scavenged after the grouse had already died. But I’ll come back to that.

A variety of different methods had been used to estimate the proportion of red grouse in the diet, including observations, cameras, and analyses of pellets and prey remains. I was quite impressed with the range of methods employed; many studies come unstuck because they only use one, or at best, two methods, which can produce notoriously biased results. By using four separate methods, there can be some confidence in the results, which were as follows:

To me, these robust results do not support the claim that raptors are killing lots of red grouse, or even eating lots of already-dead red grouse at Langholm, although they are eating some, of course. The results do show that diversionary feeding of hen harriers is working well; in the Langholm 1 project it was found that the proportion of red grouse in the diet of (non-diversionary fed) hen harriers was 12%.

Explaining the buzzard results, Sonja told us that Richard Francksen’s recent PhD study had found that red grouse are only ‘an incidental’ part of the Langholm buzzards’ diet, and that red grouse predation was linked to vole abundance on the moor. In years when vole abundance was high, more buzzards were seen hunting on the moor and there was a higher proportion of red grouse in the buzzards’ diet during those years. [Richard was at this seminar but unfortunately he wasn’t giving a presentation on his work].

It was at this stage of Sonja’s presentation that I found things hard to follow. She said that Richard had tried to estimate the impact the buzzards can have on the red grouse population and had found that spring predation varied from 5-26% and winter predation was 10%. Unfortunately she didn’t explain how these figures had been produced, nor what they were supposed to represent, nor the wide variation in the results. I’m guessing that she was talking about the percentage of so-called ‘known raptor kills’ found during the spring and winter seasons that could (apparently) be attributed to buzzards but don’t quote me on that because I’m really not sure. I guess we’ll have to wait for Richard to publish his results. Sonja told us that “similar calculations” were being done for hen harrier and peregrine but no results as yet.

Sonja ended her talk with a quick review of which project targets had and hadn’t been met, and then briefly (and I mean briefly) listed the seven future options that were being discussed for the Langholm 2 project. These were:
1. Accept that the project hasn’t worked and abandon driven grouse shooting, but then accept all the negative consequences associated with it (according to Sonja these will be impacts on habitat, species diversity & the local economy).
2. Look for alternative funding, maybe in combination with walked-up shooting, to keep the moorland management and retain the gamekeepers. Sonja thought this was quite unlikely given the significant financial investment required to sustain the moorland management.
3. Look at lethal vs non-lethal control (of raptors) but Sonja pointed out this was highly controversial and unlikely to happen in the current political climate.
4. Look at other mitigating efforts such as “modification of the habitat to discourage voles” (as vole density seems to be the main driver of buzzard hunting over the moor “causing more casualties to grouse”).
5. Look at providing diversionary feeding for other raptors, e.g. buzzards.
6. Make use of intra-guild effects (e.g. the presence of golden eagles can cause ‘spatial avoidance’ in other raptors.
7. Just be patient and wait another five years for red grouse to reach a level of shootable surplus.

I have to say I wasn’t totally convinced by Sonja’s interpretation of what was going on at Langholm, mainly due to the two issues I’ve already mentioned (the high density of red grouse required to trigger driven grouse shooting, and the assumption that raptors are responsible for 90% of the recorded red grouse deaths). My scepticism was further increased when I heard what Mark Oddy (Buccleuch Estates) had to say during the following Q&A session.

26 Replies to “Guest blog – What have we learned from Langholm? by Dr Ruth Tingay”