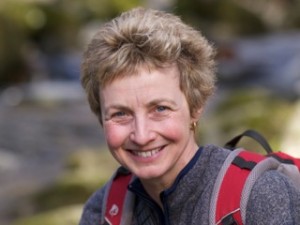 Mary Colwell-Hector is an award winning radio, TV and internet producer winning 14 awards over the last 8 years, including a Sony Gold in 2009.

She is also a radio presenter and feature writer for The Tablet.  She has produced natural history series such as Saving Species and Natural Histories on Radio 4 and was the lead producer for the Radio 4 series Shared Planet.

Mary has written two previous Guest Blogs here: one on GCSE nature studies and the other on Shared Planet.

Her excellent biography of John Muir was reviewed on this blog.

One of the reasons I have always loved curlews is they seem to hold opposites so gracefully. The long bill on a small head suggests Cyrano de Bergerac, but like that fictional character, the curlew is also a joyful poet and musician of the wild. From a distance the plumage is dull, but a closer look shows exquisite patterning of browns, cream and grey. Not bright colours for sure, but as G K Chesterton wrote about the seemingly monotonous look of an English village on a grey day, “Clouds and colours of every varied dawn and eve are perpetually touching and turning it from clay to gold, or from gold to ivory… The little hamlets of the warm grey stone have a geniality which is not achieved by all the artistic scarlet of the suburbs.” So to watch curlews feeding in rain or sun, dawn or dusk is to see subtle beauty adorning a muddy marsh.

It is their call however that has fired the imagination of poets, musicians, artists and the prayerful. They have a range of calls from harsh to mournful, an evocative piping that seems to say so much about silence. The two most often noted are the “curlee, curlee,” from which it gets it name, and the hauntingly beautiful call heard most often in the breeding season – a bubbling crescendo that ends in a long note. It inspired Yeats to write of lost love.

O CURLEW, cry no more in the air,
Or only to the water in the West;
Because your crying brings to my mind
passion-dimmed eyes and long heavy hair
That was shaken out over my breast:
There is enough evil in the crying of wind.

Sad, melancholy, even downright ominous – the curlew has often been associated with death. In some areas, The Seven Whistlers were thought to be curlew, a painful cry renting the air that chilled those who heard it. In Wales the call of the curlew was associated with Cwn Annwyn, the name given to the mythical black dogs that hound the souls of the dead across the sky. To hear a curlew at night was to expect disaster.

Then again, Robbie Burns wrote that he had “never heard the loud solitary whistle of curlew on a summer noon…without feeling an elevation of soul.” The legendary wader expert Desmond Nethersole Thompson believed, “it would be a poor creature who cannot delight in the guttural sounds of a pair of courting curlews.” And Ted Hughes obviously watched and listened to them with joy. “Curlews in April/Hang their harps over the misty valleys.. A wet footed god of the horizons.”

We have a lot to thank curlews for, they have inspired so many thoughts and emotions and yet they are disappearing fast. The statistics are terrifying. Over the last 20 years there has been a 97% crash in numbers in southern Ireland. In County Sligo, where Yeats would have heard the curlew call in his youth, there is not one breeding pair. In the early 1980s there were an estimated 2000 breeding pairs in Ireland, a survey by BirdWatch Ireland last year revealed only 159. In Wales, there has been an 80% crash and throughout England and Scotland an average of around 50%. This unfolding disaster has largely gone unnoticed, mainly because the UK hosts many thousands of Scandinavian birds through the winter months.

Like sparrows and starlings, common birds always seem to be common – until they are in crisis. Since researching curlew many people have commented that they often saw curlews around their local patch but are now rare or gone altogether. Monty Don wrote to me about the field behind his house that floods in the winter. ‘We always heard them first in the night in early Feb – that bubbling rising call – and saw them a lot too. All gone.’ A pattern repeated in most places throughout Britain.

The reasons for the decline are many and varied. In Ireland the recent rapid economic boom saw the stripping of the bogs where curlews breed, intensification of agricultural land, drainage and an expansion of forestry. In Wales the proliferation of sheep on the hills, encouraged by headage, saw curlew habitat grazed and trampled. In England trampling by livestock is also a major issue. In the North Pennines, around 33% of nest failures were due to sheep and cows. In hay meadows, early cutting of silage destroys eggs and chicks of ground nesting birds, including the curlew.

In many parts of England curlews also face the difficult subject of dog walking, which has increased dramatically over the last 30 years. In 1980 there were 5.6 million dogs in the UK, in 2014 there were 9 million. Many of these dogs are walked in the countryside and the incidence of disturbance is increasing. People mostly stick to paths, dogs don’t, and once the birds are off the nest predators move in.

The ever-present thorny issue of predators bears down on curlews too, pitching them into the sensitive issue of control. Foxes are certainly a major predator and control in certain areas has been shown to help numbers recover. How that will be dealt with by the major wildlife NGOs working for curlews is yet to be seen, but it will certainly cause debate and consternation in some areas. In Shropshire, a seasoned birdwatcher told me that when curlews were common and nesting in loose colonies they could band together to scare away predators, often joined by lapwings. Today, with numbers so low they are easily attacked. In 2015, ornithologist Tony Cross monitored twelve nests laid in the Stiperstones/Cordon Hill area. Nine nests were predated before hatching and of the three nests that did produce nine chicks, not one survived to fledging.

Curlews are long-lived birds, they can reach the grand old age of 30. It seems that our British population is ageing and not reproducing, making the future look dire. As the UK holds 25% of the breeding population of the Eurasian curlew, this is an alarming state of affairs.

And so, with hope in my heart that we can turn this around, I am going to walk 500 miles across the British Isles to raise money and awareness for curlew projects. I begin in Northern Ireland where great work is being done by the RSPB on Loch Erne, and head down to the South to see the sterling efforts of BirdWatch Ireland. I will then travel through Wales and the centre of England visiting curlew recovery programmes and giving talks along the way. I end up in Boston at the end of May. Who knows how much this will do for curlews, but I hope it helps raise the profile of this beautiful, beleaguered bird.

In Wales the 7th Century St Bueno was sailing off the coast when he dropped his prayer book into the sea. A curlew swooped down and took it to the shore to dry. St Bueno was so grateful he blessed it and said that curlew should always be protected. Well, that blessing lasted a long time, but it is now due for a refresh, so I set out on the feast day of St Bueno, April 21st. If you can support my walk by giving to my Crowdfunding site I’d be very grateful. And do come and say hello and join me for a stretch if I am passing by.

“Of all bird songs or sounds known to me,’ wrote Lord Grey in The Charm of Birds, ‘there is none that I would prefer than the spring notes of the curlew…The notes do not sound passionate they suggests peace, rest, healing joy, an assurance of happiness past, present and to come. To listen to curlews on a bright, clear April day, with the fullness of spring still in anticipation, is one of the best experiences that a lover of birds can have.”

If anyone reading this has a bed for the night to offer on my walk then that would be much appreciated.