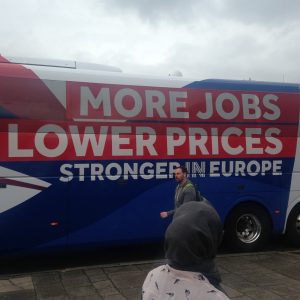 A lot is made by the Brexiteers of taking back our sovereignty. Piffle!

And much was made of President Obama’s pronouncements on whether the UK should stay in the EU, and the suggestion was that the USA would never give up its sovereignty in a similar way. Eh?

The clue is in the name – the United States of America!  It’s a country made up of large economies with more in common than separates them, that act together to be stronger and to further a common interest.

Take California, an economy about as large as the UK’s, which has open borders with Oregon, Nevada and Arizona. I remember being stopped at the border between AZ and CA once and asked whether I had any fresh fruit in the car but that was it (and then I turned on The Eagles and Hotel California and drove to the ocean) but that’s a bigger barrier than I have experienced crossing EU borders.

I’m not saying that I want a full USE – United States of Europe – but it’s a bit rich saying that Americans wouldn’t stand for this type of thing when they fixed their country that way over a century ago. And the CA independence movement is rather small. Montana is not riven by Montexit.  Maine wishes to remain.

It is a necessary part of a civilised life that we each give up some freedom (eg freedom to kill people) for the common good. It’s almost a definition of the passage of civilisation that we have given up the freedom to act badly in return for everyone behaving better – and it’s always been those who are most powerful who are most reluctant to allow this. We all benefit from rules, if they are good ones, that promote the common good. That is one of the points of government.

I give up part of my sovereignty over how I live my life simply to be a good neighbour – and I respect my neighbours for doing the same.  I give up a bit more by electing district councillors, paying local taxes, and letting them get on with doing things on my behalf (but reserve the right to moan about them when I like). I give up quite a lot of sovereignty by electing an MP (if only my fellow constituents had voted the same way as I did) and then paying taxes to a government that runs the country. I’m perfectly happy for some of my sovereignty to go all the way to Brussells and not be stuck in Westminster because I can see that brings me benefits environmentally, socially and, probably, though least importantly, economically (and I’ll put up with the irritations – and moan about them).

Some British politicians want to take back from the EU all the power/influence/money/sovereignty that I have lent to them. That’s my power/money/influence/sovereignty that Boris, Nigel and Michael want – it isn’t theirs!  I’d rather continue to pass it to the EU which seems to be a gang worth being in.  I’ll be voting, through my free choice, to continue to loan the EU some of my power on 23 June.

17 Replies to “That sovereignty thing #Remain”