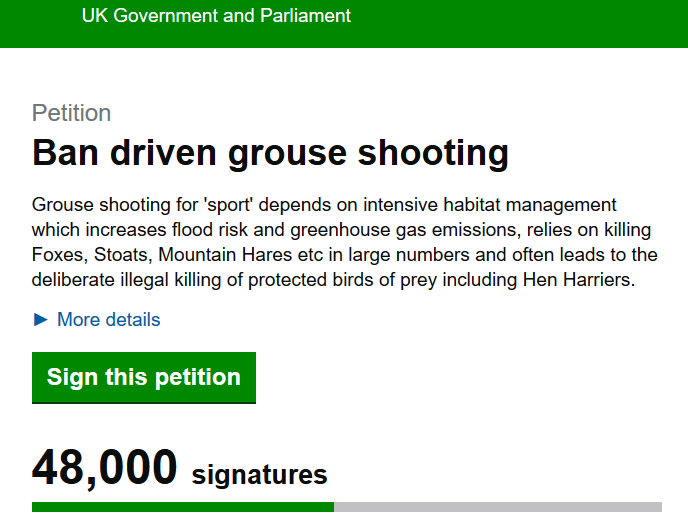 Thank you to all of you who have signed, asked your friends and relatives to sign, supported the promotion of the e-petition financially and helped in many other ways.

There has been quite a surge in signatures from Scotland recently and a bit of a surge, let’s call it a mini-surge, in Labour seats too. If all Westminster parliamentary constituencies were Conservative or SNP seats, and behaved like the current ones, then I would be very confident that we would reach the 100,000 signatures by 20 September. As it is, I am hopeful and optimistic rather than confident. And I am excited by the prospect too.  There are lots of initiatives planned for the next 12 weeks and I am sure that we will keep up the momentum.

48,000 signatures – that’s a lot of people.  That’s actually a lot more people than shoot grouse in the UK each year (according to industry figures). The grouse industry is rather coy about admitting how few people take part in shooting each year.  Taking all forms of grouse shooting together, there are perhaps 5,700 days of grouse shooting each year. It would be rather surprising if the number of guns involved in each shoot day were as high as eight which would make a total of c46,000 actual shooter-days. Now of course some people, quite a few, will shoot more than once a year and so the number of people involved in shooting grouse is much much smaller.  We already have more people who want them to put their guns down and walk away from the guns than are wielding the guns.

Next week I’ll be coming back to the subject of the economics of grouse shooting.