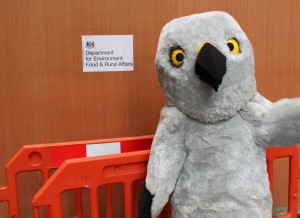 Defra is the government department responsible for nature conservation – it’s hard to remember that because it’s a long time since Defra did anything remotely important for nature.  I’ll come back to that general issue at a later date but let’s just look at Hen Harriers since this coming weekend sees Hen Harrier rallies in England (6), Scotland (4) and Northern Ireland (2).

Defra responded to our e-petition asking for a ban on driven grouse shooting several months ago with an arrogant, misleading and hopeless response – that e-petition now has more than 72,500 signatures and might be debated in the Westminster parliament (if it reaches 100,000 signatures by 20 September).

Defra has done nothing to help the Hen Harrier and looks like it is in the pocket of the criminal elements of the grouse shooting industry (it’s just a hobby really). Theresa May was certainly not thinking of grouse shooting when she said her government would look out for the people and not the powerful vested interests – she wasn’t thinking about grouse moors but she might have been, and Andrea Leadsom and Therese Coffey must.  We need to see Defra raise its game – people’s patience is coming to an end.