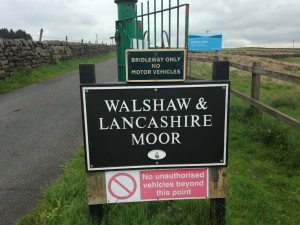 Hebden Bridge in the Calder Valley has experienced terrible floods in recent years. Locals blame the severity of these floods on the intensive management of Walshaw Moor for driven grouse shooting. Now there appears to be some new scientific evidence to strengthen that view.

Hebden Bridge is in the Calder Valley constituency which provided 870 signatures to our 123,076 total. To put that in context, if all UK constituencies had been as prolific we would have amassed 565,500 signatures.

So, I feel a little bit emotionally involved in the folk of Hebden Bridge and the Calder Valley,  and I keep an eye on their ‘Ban the Burn’ campaign.  So it was with interest that I saw this report on their website. There is a new report from Durham University which seems to back up the belief that increased flooding is due to the management of the hills above Hebden Bridge. The report itself is only a summary and the it is quite telegrammatic in style. It’s not my area of expertise and whereas I reckon I 70% understand 70% of it that isn’t quite enough to be very certain that I really understand it, and more importantly, its limitations.

And the author, Dr N. Odani, who is an Honorary Fellow in the Geography Department at Durham hasn’t responded to my emails so far. And so I wouldn’t want to go overboard on pointing out this study. However, increased flood risk, we know, is likely to arise from the burning of heather moorland and I’m absolutely certain that Dr Odoni knows more about this subject than I do.

Heather burning has increased quite dramatically in the English uplands in recent years. And extreme rainfall events seem commoner too, and are expected to become even commoner. The combination of more burning and more heavy rain seems a recipe for increased flooding of communities such as Hebden Bridge.

The economic damage caused to businesses and homes in places like Hebden Bridge can be illustrated by Lesley Wood’s tale. Her business was closed for 6 months and the insurance company only covered about half the costs of repair and renovation. There was then the long process of building her business back up again, and worrying every time she heard rain on the roof at night.  It’s easy to imagine that Lesley’s business lost a quarter of a million pounds because of the 2012 floods and that story was repeated for many businesses in Crown Street, Hebden Bridge, and beyond in 2012. A total cost of £50m wouldn’t be out of the question.  And then it happened again, and was worse, in December 2015.

To the extent that heather burning up the hill added to the woes of the businesses and residents of Hebden Bridge it could be a classic case of personal gain (in day’s shooting) for the few having a much larger cost for the many downstream.

What price should we put on flooding to include the misery as well as the straight economic impact – and how do we set that off against the hobby of shooting birds for fun?  How much fun for people like millionaire grouse shooter Richard Bannister should be allowed for how much misery for the likes of Lesley Wood?