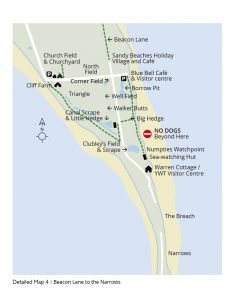 Last week I spent most of a day birdwatching at Spurn, and by chance the first person I met was Georgia Locock whose guest blog appeared here on that very day. So I had a chat with Georgia at about 8am and spent the rest of the time birding. It was a nice relaxing day.

I did have a look at the proposed site of the Yorkshire Wildlife Trust visitor centre and of course the subject came up with a few birders I met through the day, as did the upcoming (at the time) debate on driven grouse shooting.  I had a few ‘Don’t I know you? It’s Mark isn’t it?’s and a few others managed to get Hen Harriers into the conversation somehow just to show that they were up to speed with things.

But mainly it was a day’s birding. Quite relaxing but also slightly exciting just because I was on the east coast in the last week of October and the winds had been from the east for days.  I don’t chase rare birds, but I don’t mind being in places where they turn up – and Spurn is certainly one of those.

There was a Pine Bunting seen (Ahem! Rather close to the proposed visitor centre footprint) but it didn’t hang around and I was very pleased to get great views of the much commoner Snow Bunting in the caravan park. There I had a fascinating chat with a chap who knew a lot of what was going on on the moorlands near his home. Interesting stuff, indeed.

And we saw a Ring Ousel, and a Merlin, and lots of Goldcrests, and a variety of waders were out on the estuary.  There was a report of a Rough-legged Buzzard and they are always worth seeing (but we didn’t, and it’s been a while for me…) but, to be honest, things were a bit slow. However, the sun was out, and we had a decent sausage sandwich in the Bluebell Cafe.  And we had seen the road sign in Easington, Vicar’s Lane, which a few days earlier had led to a Siberian Accentor (a bird which my daughter had seen).  It was a perfectly pleasant day. Rather a nice day in fact.

We went to have a look at the wader pools at Kilnsea and spent some time in the hide working out what was what. There was a Knot with a red flag above its left knee and a dark blue colour ring above an orange colour ring below the left knee. And some Greenshank. As we left the hide two birds flew up: one was a Robin and perched not far away; the other flew out of sight to the left and was robin-like but I wanted to see it again. And that was quite easy because it flew back into sight and perched sideways on showing us its red flanks.  It wasn’t difficult to imagine that this was, indeed, a Red-flanked Bluetail but I’d never seen one before and surely a bluetail ought to have a blue tail? A matter of seconds later a dog came bounding around the corner of the path ahead of its ‘owner’ and scared our bird out of sight – but luckily only briefly and it reappeared in full view on a fence and was flicking its blue tail very nicely.

OK – that’s a Red-flanked Bluetail then – never seen one of those before (and have always wanted to).

There was then the question of how do we tell people about it? There was no-one else in the hide or in sight (except an exiting dog owner). Guess what? My iPhone had just run out of battery – but then it does that every few minutes.

So I kept the bird in view and my partner went back to the car to spread the word to any passing birders and to the Bird Observatory just along the road.  So I had this lovely bird to myself for the next 10 minutes or so – a mixture of delight because it is a cute bird and slight nervousness. It really is a Red-flanked Bluetail isn’t it? It has red flanks, and it has a blue tail – yep, I’m pretty sure the id is correct!! But what if the little beaut flies off before anyone else sees it? That would be a shame and a little awkward – I’d have to blame Apple and their iPhones.

The bird was performing superbly. It spent most of its time perched in good light on the fence, and down to a distance of c10m. Occasionally a Robin would chase it further down the fence line but it seemed quite keen on staying around and would creep back towards me when the Robin’s red breast was turned away.

And now and again it would fly to the ground, in shadow by the fence, and be tricky or impossible to see, but each time it flew back to the fence after a little while.

I kept my eye on it because it was a lovely sight but also I did want to be able to point it out to the next person with binoculars who came along and then relax a bit. I saw a movement out of the corner of my eye and beckoned to the approaching birder to show that there was a good bird here, and where it was. When he arrived the bird was hidden on the ground and, of course, seemed to stay there for hours (90 seconds?) making me wonder whether it was just possible that it had flown far away in the instant it took me to look away and signal its presence. But then the little beauty, my little beauty, hopped back on the fence and all was well. And more people turned up and the bird was seen by lots of folk who all agreed that it was a cute bird before we slipped away.

A gorgeous little bird. Not as rare these days as it used to be but it has always been a bird I fancied seeing, and never imagined that I would, and now I had. A self-found Bluetail – a special day.

Good job it wasn’t a Pine Bunting or Olive-backed Pipit or I might have overlooked it – but a bird with red flanks and a blue tail is quite likely to be a Red-flanked Bluetail isn’t it?