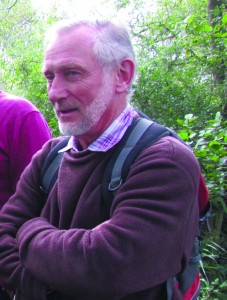 Prof Sir John Lawton FRS is a distinguished ecologist and is the chair of the Yorkshire Wildlife Trust.

He was elected Fellow of the Royal Society in 1989, awarded a CBE in 1997 and knighted in 2005  for his contributions to ecological science. He has been awarded numerous other national and international science prizes.

John was the last Chairman of the Royal Commission on Environmental Pollution, and a former Chief Executive of the Natural Environment Research Council. He is a passionate natural historian (particularly birds, botany and bugs), and enjoys walking, gardening, cooking and music. He trained as a zoologist at the University of Durham, and subsequently held posts at Oxford and York Universities, and Imperial College London.

Spurn National Nature Reserve was bought by Yorkshire Wildlife Trust in 1959 and has been managed for wildlife ever since. The site is incredibly important for wildlife and is protected to the highest level both nationally and internationally. It is one of the Trust’s most-visited nature reserves with people coming from across both Yorkshire and beyond, for the site’s wildlife (birding in particular), fishing, walking, exploring complex maritime and military heritage, for the beach, and in some cases because it is the end of the road. One of the key tasks faced by the Trust is ensuring people have a safe, informative and enjoyable visit without causing damage or disturbance to the site’s wildlife. The current situation is unsustainable and has a high impact on wildlife.

At its peak, the site attracted up to 70,000 visitors a year, although the figure has reduced in recent years. In December 2013, a colossal tidal surge wreaked havoc along the Humber and elsewhere and destroyed a lot of the infrastructure at Spurn, including the washing away of a long stretch of the road to the point. This has changed Spurn radically meaning there is no public vehicle access to the point at the moment and visitor numbers have fallen to 20,000. High tides often wash across the peninsular and create an island. This is a very hazardous situation and the Trust is working with the Coastguard, the RNLI and others to prioritise visitor safety.

Contrary to what some people may believe, Spurn has been quite built-up over the years and its fairly wild current state is a comparatively recent phenomenon, resulting from the Trust’s ongoing work to remove buildings and re-wild the site together with the loss of the road and consequent actions of the power company removing the poles along the point. Disturbance south of the Warren is lower now as no public vehicles can drive down to the point. Those prepared to walk or joining a Trust tour get the chance to experience Spurn in a much wilder setting than previously.

As early as 1996 a report by Ian Carstairs deemed the existing facilities at Spurn inadequate and stated they should be improved. The Trust put in place a long term plan to seek funding to improve Spurn’s facilities. Finally, in 2013 the opportunity arose and after discussions with the energy company E.ON, an offer of a grant to fund a new visitor centre came along. In conjunction with a Heritage Lottery-funded project to restore and open the Spurn lighthouse, create nature trails and viewpoints, Spurn could finally be getting the facilities it needs to meet visitor expectations and reduce their impact on the National Nature Reserve.

E.ON has been building the Humber Gateway Windfarm off the Spurn coast in recent months. A few years ago when their planning application was submitted, Yorkshire Wildlife Trust expressed a series of major concerns about the potential impacts on wildlife from the proposal. To their credit, E.ON took these concerns very seriously and conducted a lot of work and modifications to ensure any impact would be minimised. The Trust was satisfied with their actions and did not object to this planning application. The Trust supports renewable energy generation in the right place, i.e. where there will be no impact on wildlife, as the threat of climate change to the wildlife of Yorkshire and beyond is massive.

Despite having no obligation to do so, E.ON chose to support three major projects in Holderness and North Lincolnshire – an electric bus, an apprenticeship programme and the Spurn visitor centre. In addition, to put further funding into the local community, they set up a community fund which is open for local organisations to apply to. There was no statutory requirement for E.ON to commit this funding, they simply did it as a goodwill gesture. One early recipient of funding through the E.ON community fund has been the Spurn Bird Observatory who are the Trust’s tenant on site.

Sadly, despite a protracted period of consultation, a group of local people in the immediate vicinity of Spurn have protested very angrily about the plans and have even formed a group called ‘Keep Spurn Wild’. Some do not want the visitor centre at all, some are happy for the project to take place, but do not like the site that has been chosen. Despite lots of modifications to the plans made as a result of feedback from local people, all the evidence has indicated the location chosen is the best one and this has been independently ratified.

So, what is really at the heart of the conflict at Spurn? Naturally, local people feel a strong sense of ownership and attachment to the site, even if they carry no responsibility for it and have no liability for other users or the legal designations. This is understandable; they have spent many hours enjoying the site, perhaps helping with its management and monitoring, sharing enjoyment with other people etc. Some may have even moved home specifically to be close to the place that they are passionate about. These people view ‘absent’ landlords as out of touch, uncaring and lacking knowledge of the site and this creates conflict. This is all typical of the Spurn situation.

Secondly, the non-wildlife part of the local community has issues with the Trust for different reasons. Spurn’s location attracts large numbers of migrant birds and a good share of rarities each year, which in turn attracts thousands of birders from across the country. Whilst the Trust tries to manage visitors to the nature reserve, many of these birders spend time around the village and are therefore outside the influence of the Trust. Nevertheless, the Trust still gets criticised when a small proportion of birders walk on graves in the village churchyard or block up the road through the village with their cars. Also, the Trust’s policy of charging for car access to the National Nature Reserve for many years has been unpopular with local people who would like to enjoy the site for free. These factors combined have meant the Trust was already unpopular with some of the local residents.

Whilst the Trust has had staff on the ground at Spurn for decades, some local people feel aggrieved that some decisions that impact on Spurn are made remotely, in York. For a charity managing 97 nature reserves and working across the whole of Yorkshire, Yorkshire Wildlife Trust’s Chief Executive has to be based somewhere central, for obvious reasons.

For many years the sole staff presence was a gatekeeper who wardened the site and tried to reduce negative impacts from visitors on the wildlife of Spurn. Much of this involved stopping people bringing dogs on site, stopping people bringing quad bikes and scramblers on site, stopping camping etc – the man who says ‘no’. Some activities requested by our partners the Spurn Bird Observatory and others would sometimes be in contradiction with the Trust’s agreed management plans for the SSSI (regulated by Natural England), and again we would have to say no. As you can imagine, over time this creates conflict and compounds an already difficult situation.

The Trust has taken a lot of criticism from birders in particular about car park charges. The Trust made the decision over a year ago following feedback from a public consultation event to remove charging for local residents. People visiting from further afield should reasonably be expected to contribute a small fee to the upkeep of this major National Nature Reserve and we would hope that most would not have a problem with this. There is no charge for walking or cycling on to Spurn. Spurn Bird Observatory charges non-member visitors to access their land in Kilnsea which strangely does not seem to attract an equal level of criticism!

The Trust finds itself in a difficult position. It has a legal duty to maintain and or improve the wildlife features for which Spurn is designated – some of the management may not quite match what local birders want, which creates conflict. The Trust has a duty of care to its visitors. Spurn has become incredibly hazardous since the road was lost and despite prominent signage, publicity and verbal advice warning people about the hazards of crossing the wash-over area when the tide is in, people still choose to ignore the warnings. A new visitor centre will not completely solve this problem but will at least give the Trust a better chance to engage with more people, especially those that are new to the site.

The current visitor situation around the north end of the National Nature Reserve in the Warren area is unacceptable. Lots of cars, with no formal parking areas, lots of people free to wander wherever they wish and a collection of old dilapidated buildings is not good for a National Nature Reserve and the Trust’s plans are to move this visitor hub into a larger area to the north and re-naturalise the Warren area with dune and scrub habitat. People climbing up on the Humber Bank at the Warren, walking along the saltmarsh, walking through the bushes near the Canal and along the Canal Bank all have impacts on birds. The Trust is designing an access plan which will encourage visitors to focus their activities in less sensitive areas. While this won’t restrict access for local people who hopefully understand the sensitivities, it might encourage others who are less familiar with the area to enjoy the site without disturbing wildlife.

The last thing the Trust wants to do is to damage relationships with local people. If the other potential locations for the centre could have been proven to have no impact on wildlife and the landscape, be sustainable, give the Trust the ability to control and manage access to Spurn, then we would have leapt at the chance. Instead, we have endured a very difficult time by seeking the option that has least impact on wildlife and the landscape, will cope with being flooded and is close enough to the nature reserve to enable visitor management.