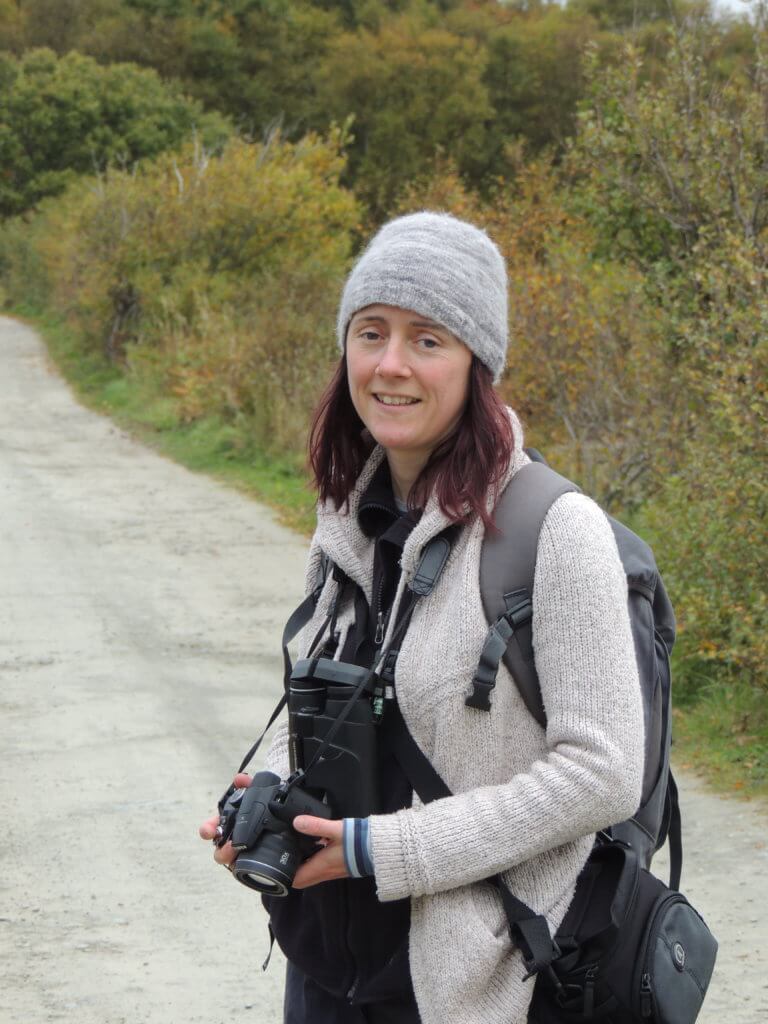 Lizzie gained her enthusiasm for wildlife from her family during her childhood, growing up  in Bristol. Conservation volunteering soon became a passion, and she then moved to Wales in 1996 to study at Aberystwyth University. Since 2003 she has worked in nature conservation in the voluntary sector in Wales.

It was Politics with a big ‘P’ that resolved my childhood fascination with wildlife into a career in conservation. It may be politics with a small ‘p’ that drives me back out. Whilst I can see the wasteful, and arguably cowardly capitulation that would represent, resisting that urge is increasingly difficult.

Growing up in the 1980s, it was environmentally catastrophic policies and powerful negative campaign imagery that fed my zeal: hedges being grubbed out, meadows disappearing, and species extinctions. I looked around me and thought, ‘I can change that’. All I ever wanted to do was work for a conservation charity.

I’ve been ‘living the dream’ now for thirteen years and have risen to a managerial post in a conservation charity. During this time and the prior ten years, during which I volunteered, I have experienced a sea change in the environmental charity sector.

Much of the change I have seen stems from the inevitable professionalisation of such organisations. Groups once driven by small bands of committed volunteer naturalists and campaigners are now run as businesses by full time staff. Whilst the old guard may bemoan this change, there was little  choice for charities if they were to survive. The advent of ever larger grants, such as lottery funding, and the need to protect charities from financial risks such as those imposed by our increasingly litigious society, have come at a high financial and bureaucratic cost, as they have in every sector.

The consequences of this ‘professionalisation’ for environmental charity employees are many and various. We have, in some cases, lost eclectic and charismatic free spirits who drove the early development of the movement. We get better salaries, and more career opportunities, but we are more likely to be generalists than specialists, and we have to deal with the media, fundraising, health and safety, and advocacy as well as being natural historians. Despite their necessity in a changing world, these changes have also helped induce criticism of charities being too process-focussed and industrially self-sustaining.

Fortunately though, it’s undeniably still a passion for wildlife and a desire to secure change that first brings people to the job. For most of us, it’s ultimately a religion. It’s a fundamental belief in the value of life other than in human form, and its right to exist in something approaching a natural state. We all start with the aspiration of putting right what we believe is wrong. For me, that deep belief and determination still exists, but it is increasingly hampered by the circumstances in which we operate.

When I look at what hinders me, day to day, it’s not actually the grand political machinations of our time. Certainly, we still face governments that dismiss the environment as little more than bolt-on, feel-good work for strong economic  times, but when was that ever any different? What now causes me extra obstacles, frustration, anger even, are the unnecessary barriers put in my way by people and organisations on my own side of that debate. The politics with a small ‘p’.

I keep reading that we live in a ‘post-evidence’ world: a world of soundbites, of advertising, of the all important self. What saddens me is that in our fight to be heard, and in a resource-poor environment, we have turned these curses of the modern age on ourselves- and at great, but ultimately avoidable, cost.

Over the last ten years, across the suite of charities and agencies with which I regularly work, I have seen all manner of damaging behaviour defended as activity necessary to raise the profile of a project, or organisation. I have seen charities use slogans that are ecologically illiterate, just because the appeal of their simplicity is deemed more important than a nuanced but accurate message. I have seen charities quietly try to out-bid each other for land acquisitions. I have seen attempts to supress criticism of agencies failing in their statutory environmental duties because of the importance of the funding relationship. I have seen innumerable press releases from all manner of charities dispensing with accuracy and moderation in their description of a story, in order to trample their competitors to the front page with a cute picture and a feelgood headline.

In the meantime, commentators within our own field are looking at our work and saying, “Where are you when it counts? You have lost your courage; you are failing to take a stand.”

The irony is that behind the soundbites a huge resource is routinely invested in the ongoing work of these charities. Every day, hundreds of reserve managers go out to work and maintain the nature reserves in their care, and hundreds of staff visit schools and run activities to engage the next generation with what we believe matters most in this world. The enormous resource that this demands, and the work itself, is almost taken for granted, despite the massive step forward this represents from the environmental movement of half a century ago.

Rightly, we are judged, and scrutinised; it informs our priorities and choices, it stops us making mistakes. However, there comes a point where public ‘friendly fire’ is excessively damaging. Nothing we have achieved is ever enough until wildlife ceases to decline and disappear. The enormity of this already weighs heavily on any of us who regard conservation as our vocation, and so we bear the judgement and try harder- but the soundbite-unfriendly, costly, essential work goes unreported, whilst we are publically criticised by peers on how vocal we are (or not) their latest cause célèbre.

Ultimately, we all work in a sector with a huge financial and societal mountain to climb, with barely the resources to begin the task ahead. In that context, perhaps the collateral damage of competition seems rather inevitable, yet I remain convinced that in the competitive promotion of our personal micro-causes, we heap misery upon ourselves. The proliferation of medical charities over the years seems largely to have led to the celebration of the advances they have secured and the contribution they have made, not bitter recriminations from experts in their own field as to why they have not already persuaded the government to triple the NHS budget, and created a nation of health freaks.

The only people who gain when we fight, criticise our colleagues, dumb-down, dispense with integrity in favour of popularity, and undermine each others causes and approaches, are those whose vested interests are threatened by environmental awareness. Each headline that diminishes our colleagues diminishes the message of our movement, and our micro-politics are helping decision makers to dismiss us. The diversity and history of our movement can and should be a strength, and we need to find a way to recognise that the many individuals and charities all have different but equally valuable roles to play. We must work better together in spite of our differences. If we each stop trying to be the loudest voice, who knows, we might find that together we might actually be able to say something that makes more impact than the sum of our parts. We might garner support. We might find the energy to lift our eyes to where they should be; on the horizon.