I spent c12 days in the Doñana area in late April/early May, with Ruth Miller, and we were researching a potential book – which we are now writing.

And so it was even more interest and concern than usual that I have watched the news of the massive fire that has consumed large areas of woodland to the west of the National Park (see here, here, here).

If you have ever visited Doñana then you have probably birdwatched at El Rocio and may well have driven south to (or at least towards) Matalascañas on the coast and perhaps called in at the visitor centres to the west of the road, south of El Rocio, at Acebron and Acebuche.

The area affected is to the west of the El Rocio-Matalascañas road and north of the coast.  The fire started in the area between Moguer and Mazagon and headed west towards (but not I believe reaching) the tiny place of Los Cabezudos (we went there but I bet not many readers of this blog have!).

Here’s a map of the fire-affected area… 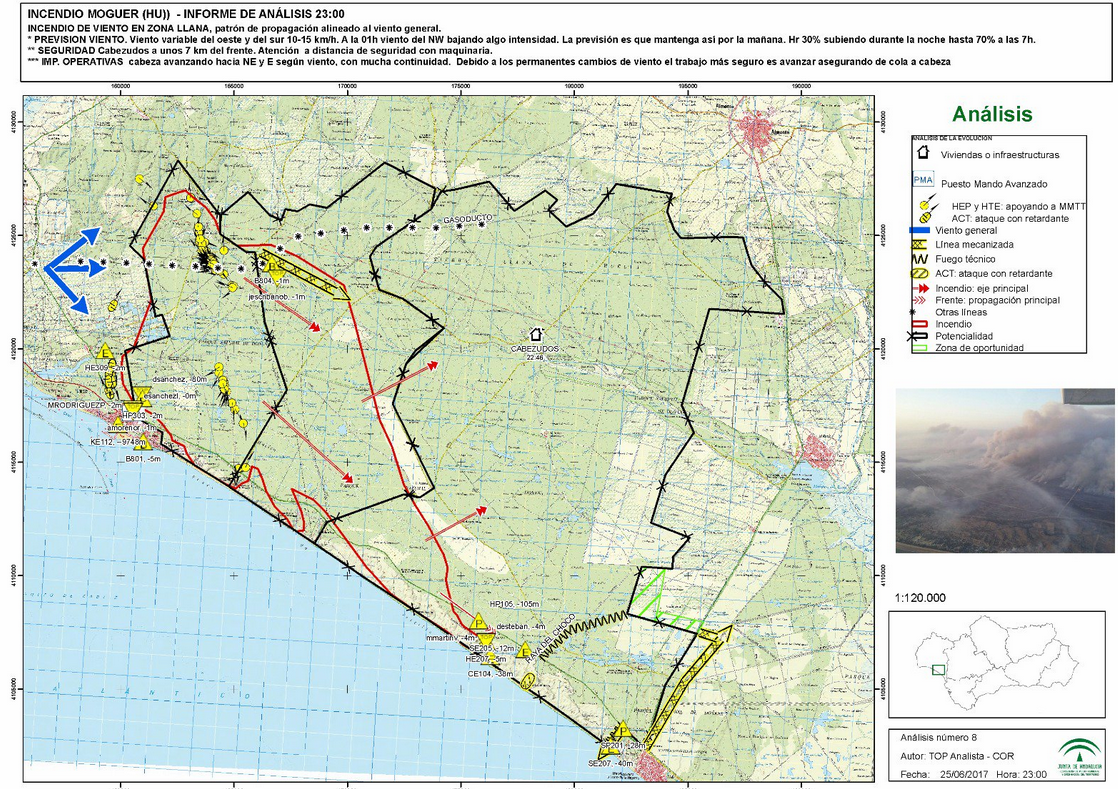 Almonte, El Rocio and Matalascañas are the red areas to the right (east) of the map. Los Cabezudos is more or less in the centre.  The red line indicates the area of massive fire and the arrows show which way it was heading.  Ruth and I drove through this area one evening after visiting the coast by the Parador at Mazagon.  This area is not part of the Doñana National Park but it is part of a slightly lower level of protected area and, essentially, it is a very rich area for wildlife. In particular it is a great area for the very rare and endangered Iberian Lynx – the most threatened large cat in the world with only c350 individuals, c35 of which are in the Doñana area.

Mediterranean vegetation has evolved in a fire-rich environment and given time we can probably expect the area to recover well – but it will take time.  Large parts of this area were covered with mature forest and pine plantation.

When such an event happens, it’s a bit difficult to predict how either nature or humankind will react. There is the possibility that habitat recovery could be even better than the habitat which has been lost – that certainly ought to be the aim. On the other hand, in an area under so much human pressure (from water abstraction, agriculture, built development, introduced species, human disturbance, illegal hunting etc etc) it wouldn’t take too much for things to be made worse by crackpot schemes for new roads, industry or dwellings within the affected area.  It’s good to see WWF Spain, who have a long and generally very honourable long history of activity in the area, calling on the Spanish authorities to ensure that the whole area is protected for its wildlife into the future.

The future of the Iberian Lynx does not wholly depend on Doñana, in fact I think other areas probably ought to be higher priorities, but we can’t be too sanguine about any part of such a small world population.  And the area affected by fire could, as I say above, potentially be restored to an even better area for Lynx with thought, care and time, but there has been another impact.

In the evacuation, the Lynx reintroduction breeding centre, near the Acebuche visitor centre, had to be evacuated too. Staff there had some agonising decisions to make. They could only take some of their breeding stock with them (and just think about it – you can’t ask half a dozen Lynx to get in your car and put their seatbelts on) and so 14 Iberian Lynx (including five kittens) were relocated and another 13 (presumably all adults or near-adults – but I don’t know that) were simply released to take their chances. One of the translocated Lynxes died of stress during the relocation.  I expect they had a contingency plan for such an event but you certainly wouldn’t want to be thinking on your feet with winds of 90kph bringing an inferno in your direction.

It seems that the fire is under control now and things have been less disastrous than might have been the case. I haven’t seen any reports of human deaths.

But the worrying thing is that there are rumours (but there always are rumours) that the fire might have been started deliberately.  Arsonists don’t always need a motive apart from doing it for the hell of it, but other motives might include wanting to facilitate economic development in the area through a literal scorched earth policy.

Doñana is wonderful – but it is still highly threatened. And this fire is yet another assault on its ecological integrity.

Best wishes to all friends in the area and all wildlife in this amazing area too.