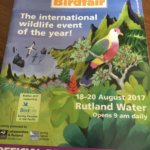 I’ll come back to using the Bird Fair for political leverage this evening – this blog is a mixture of thoughts about how it could be a little bit better for attendees. These thoughts have been derived from in-depth surveys of people in my car heading to or from the Bird Fair and a few chats with others.

How the Bird Fair could be better:

But what would be your suggestions?