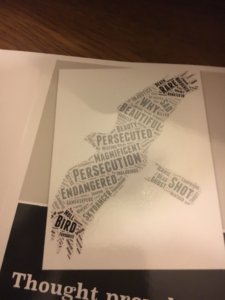 You must read this account of Findlay Wilde’s visit to Downing St to talk to Sir John Randall, the environment advisor to the Number 10 Policy Unit.

Findlay is a good advocate and I’m sure that he and John got on well.

I was fascinated by some of the remarks that John was happy for Findlay to publish – as I’m sure will be the grouse shooting industry.

Here are two excerpts that will indicate that nature conservation has a friend in No 10.

1. Driven grouse shooting
Findlay wrote: I was reassured that you see this as a serious issue. The shooting industry must put the effort in up front and prove they are willing to change things.  It would be great if you could get the removal of gun licenses made law for anyone found guilty of shooting raptors. Please could you get a meeting to re-look at the Hen Harrier plan as we both know that brood management is not going to work. DEFRA need to step up to the mark and do more to prevent wildlife crime.
John Randall responded: As I hope you appreciate, I personally take the issue of the continued illegal killing of birds of prey very seriously. It is of course something not exclusively associated with grouse moors and persecution also occurs elsewhere. It is high up on my agenda as it is totally unacceptable.

There are other environmentally harmful practices associated with some moorland practices that also need to be addressed. However there are positive signs within some elements of the shooting lobby that they now recognise that urgent changes in practice need to happen and a culture change is required to ensure that the criminal element is exposed and brought to the law.

One of the big problems is the difficulty in obtaining prosecutions and indeed getting successful ones. I am looking at how evidence gained on private land could be allowed. This is potentially an issue for the Ministry of Justice, the Home office and the police forces. I am proactively looking at this.

As part of this as you know I seeing how we might increase sentences for wildlife crime as well as removal of firearm licences for wildlife crime and other crimes. You all shared with me the desire to prevent and prosecute wildlife crime. As I state above the Home Office and Ministry of Justice probably have an equally important if not more important role than DEFRA in that. Ultimately the various police forces and particularly the Police and Crime Commissioners have to be made aware that this is seen by many people as a policing priority. So that’s where people can write in to their PCC to emphasise the point, anything that can be done to encourage the public to do that would be most welcome..

Findlay wrote: Before leaving the meeting, I gave Sir John some of the “Thought Provoking Hen Harrier” cards that I had written out for some of the MPs, and I particularly liked this part of Sir John’s email to me:
John Randall responded: I gave your Hen Harrier card to Michael Gove in person today, he sends you his thanks and best wishes. It gave me the opportunity to talk about the issues – so thank you from me too.

The sooner Findlay is back in Number 10 to stay, the better!
Likes