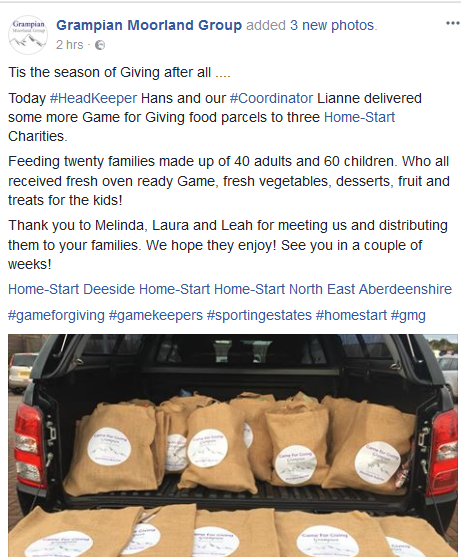 The Grampian Moorland Group is supplying game to local branches of the charity Home-Start. Home-Start is a ‘Family support charity, supporting families with a child under five, that helps parents build better lives for their children.‘.

This may be happening elsewhere in the country too, for all I know.  And for all I know great care has been taken to ensure that any donated game meat was shot with non-toxic, non-lead, ammunition.

Home-Start will no doubt be aware of the health impacts of lead-shot game, but if not then here are some references and quotes (with some phrases highlighted in red and links to the full reports and scientific papers):

‘Research findings have heightened public health concern regarding the hazards of low dose lead exposure to adults and children. In adults, studies have established the potential for hypertension, decrements in renal function, subtle decline in cognitive function, and adverse reproductive outcome at blood lead levels less than 25 micrograms per deciliter (μg/dL). The developing nervous system of the fetus and young child is particularly sensitive to the deleterious effects of lead, with adverse impacts on physical growth and neurocognitive development demonstrable at blood lead levels less than 10μg/dL. No low dose threshold for these adverse developmental effects has been discerned. Epidemiological studies, and risk assessment modeling presented in this paper, indicate that regular consumption of game meat harvested with lead ammunition and contaminated with lead residues may cause relatively substantial increases in blood lead compared to background level s, particularly in children. Because lead -free ammunition is an available substitute, this risk is amenable to the public health strategy of primary prevention.‘ KOSNETT, M. J. 2009. Health effects of low dose lead exposure in adults and children, and preventable risk posed by the consumption of game meat harvested with lead ammunition. In R. T. Watson, M. Fuller, M. Pokras, and W. G. Hunt (Eds.). Ingestion of Lead from Spent Ammunition: Implications for Wildlife and Humans. The Peregrine Fund, Boise, Idaho, USA. DOI 10.4080/ilsa.2009.010′

‘The FSA’s advice since 2012 is that frequent consumers of lead-shot game should eat less of this type of meat. Eating lead-shot game on a frequent basis can expose consumers to potentially harmful levels of lead.‘ Food Standards Agency website.

‘There is no agreed safe level for lead intake. Independent scientific expert groups across the European Union advise that exposure to lead should be reduced as far as possible.‘ Food Standards Agency website.

‘Can lead shot and bullet fragments be present in game meat at levels enough to cause significant health risks to children and adult consumers, depending on the amount of game they consume?

Yes, almost certainly. In the order of 10,000 children are growing up in households where they could regularly be eating sufficient game shot with lead ammunition to potentially cause them neurodevelopmental harm. Tens of thousands of adults, including pregnant women and their unborn, are also exposed to additional lead by eating game as part of their normal diet lead exposure, and this could potentially cause them a range of low level but nonetheless harmful health effects.’ Report by Lead Ammunition Group to Defra and FSA, June 2015.

‘Are safer alternatives to lead ammunition available that would remove all the problems in one go? Yes, there is experience from other countries where the change has already been made. There are issues to sort out and time would be needed for any phase out/phase in – and it would be controversial and resisted to start with – but changes could be made quite quickly and at relatively low cost with obvious benefits to wildlife, human health, the image and reputation of shooting sports, secure game markets, and a new platform for dialogue to solve other conservation and land-use issues. Such positive benefits are already apparent in countries that have already made the change to non-lead ammunition.‘ Report by Lead Ammunition Group to Defra and FSA, June 2015.

So, Home-Start, have you:

When the charity Fareshare was made aware of the science of lead in game meat they put this information on their website:

Following FSA advice, we are unable to redistribute game to charities where pregnant women or women trying for children, toddlers or children are being fed.

Wild game products must always be accompanied by on-pack labelling guidance regarding frequency of use and suitable consumers.

35 Replies to “Home-Start – have you done due diligence on game meat?”