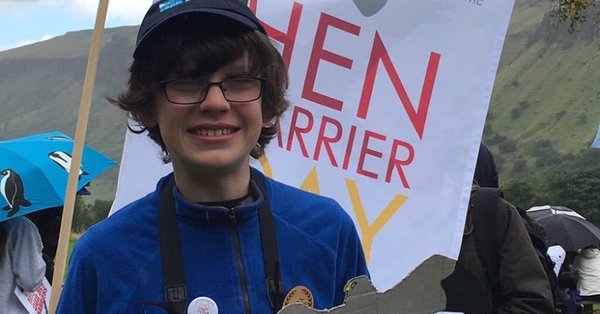 My name is Dara McAnulty, I’m a 13 year old aspiring naturalist, scientist and conservationist living in Northern Ireland. I write a nature blog called Young Fermanagh Naturalist and I try to do what I can to raise awareness about local as well as national issues which face our wildlife and environment.

I remember the first time I saw a raptor, when we had long car journeys dad would encourage us to play ‘buzzard watch’, we delighted in each bird we saw, but an underlying thought always passed through me like a shadow. We didn’t see enough of them. Each time we were lucky enough to see them soar, wings outstretched, wheeling and plummeting; my heart skipped a beat. I became passionate and excited by all birds, especially raptors, well every living creature really, and I read vigorously. In 2011 the RSPB visited our school. I was having a tough time at school and engaging was difficult but when a lady came to speak about Red Kites and their re-introduction programme – I listened, for the first time, in a long time. Nature became my refuge, my school, my playground and my source of wonder and curiosity. We adopted a bird and I got into a lot of trouble asking constantly how our bird was doing. I found a way to follow the progress of the programme – my mum helped me – and it was not good news, she didn’t hide the facts from me. Secretly I think she wanted to instil a feeling of wanting to make a difference. That seed of anger grew into a bud of trying to advocate change. You see, many of the Kites were poisoned and it was not looking good. Later, I found out that people liked to shoot birds of prey and all of them got away with it. That made me extremely angry. I didn’t want to seethe though, I wanted to try to make a difference. I started my blog in 2016 when I was 12 years old, I wasn’t writing for anyone but myself really, but I joined Twitter and my mum helped me share my blog and suddenly, I was catapulted into a world where people enjoyed my words and took an interest in my perspective – which is probably different to many people’s as I have Asperger’s. My intensity and probably my propensity to say what I really think, seemed to connect with people and I was shocked and really surprised. I heard whispers that I was making a difference and that if I wanted, I could probably build on that, if say, I had an idea to help with the issues that caused me most concern. Thinking back to those feelings of despair I felt as a helpless 6/7 year old, the overwhelming concern was always the mistreatment and persecution of wildlife – in particular, raptors. Everything circled back to that, much like that wheeling buzzard which surged my passion and commitment to try and make the world a little bit better. I’m passionate about lots of issues but I wanted to do something which could affect local biodiversity. I found out recently, that “57 birds of prey (died) by reckless or criminal activity during the last eight years” (Dr Eimear Rooney), I believe that this is just the tip of the iceberg, how could we really know the extent of the problem if people weren’t aware or the bodies were too decomposed?

I thought a lot about how I could help and sheepishly presented an idea to the Northern Ireland Raptor Study Group  (NIRSG). I had already met Dr Eimear Rooney and Dr Marc Ruddock at Hen Harrier Days and I chatted with Eimear a lot on Twitter and by email, so I felt comfortable, but I was incredibly nervous. I spent so much time turning the idea around in my head, that I had worked myself up a little. I really wanted it to work. I wanted to raise money to fund satellite tags for birds of prey such as Hen Harrier, Buzzard, Peregrine Falcon and Red Kite – I know that tagging all these birds is unlikely, but I wanted to hope that I could raise enough to tag some of the species. I was getting so fed up with not only the criminal behaviour of persecutors but also the apathy and the lack of knowledge surrounding these keystone species. I love walking, but I’ve never walked more than 10 miles at once, for raptors, I wanted to walk 30 miles (ok, over two days) in the middle of winter, across upland and mountain – to fund a project to help them. I talked to Eimear about the idea and well, we had to iron lots of things out; after all, it would require a lot of management, if the campaign was in any way successful. I was so thrilled though when Eimear and Marc gave me their blessing to go ahead, they could make it work: with full transparency and ethics, they could deliver what I only dreamed of. A raptor tagging project called ‘Hawk-Eyes’ – which I hope, will be a regional awareness project raising the issue high in the public and political agenda. NIRSG were so supportive and passionate about what we could hope to achieve: “Dara is walking, so you don’t have to, he is walking to raise money for satellite tags which we will use to monitor birds of prey in persecution hotspot areas, to deter criminality and catch perpetrators in the act. He is doing it for his passion, and ours, to protect birds of prey” – Eimear sent these words (and lots of others) to NIRSG members. I was really chuffed when I read that, it meant that something was really going to happen, with a lot of help and generosity of course.

I want to live in a world where nature is truly protected, not a hat tip to look good. There are people on the ground working tirelessly to stamp out wildlife crime but if we could afford the technology to help them, then I think that would be a great start. Satellite tagging raptors is a delicate business and I’m under no illusion as to how it all could end, but what if it contributed to evidence and provided enough data to prosecute criminal behaviour?! It could also deter criminality, especially as we plan to educate and create awareness within communities. I truly believe that science and evidence and of course passionate enthusiasm will win over hearts and minds. I believe it will make the perpetrators think twice before blasting a bird from the sky or distributing Carbofuran (an illegal poison but still, it was responsible for the confirmed death of three raptors in NI – 2015/16) and traps to inhumanely and illegally kill these protected birds!! We must stop this, we must try. Otherwise you have anger that goes nowhere. This is illegal behaviour and it needs to stop. I’ve been really uplifted by the response, but I would really love to make a bigger contribution to help Northern Ireland Raptor Study Group, who do astounding work to help conserve and protect our majestic raptors. If you feel moved, you can visit my JustGiving site here . It would be so brilliant to reach our target, or even surpass it, which would be even better!

I would like to thank Mark Avery for giving me the opportunity to share my passion for raptors here on his site.