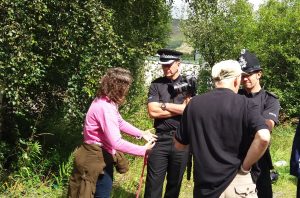 A week ago RaptorPersecutionUK published a post which revealed that Amanda Anderson of the Moorland Association had said that some of her members were planning to apply for licences to control Marsh Harriers on moorland.  RPUK is rarely wrong but we all waited for the rapid, detailed and hurt denial that would have been an appropriate response had this report been misinformed. But there has been no denial or statement on the Moorland Association website and no angry reaction from other shooting groups. They all kept their heads down and hoped it would go away – which is why I am writing this blog.

People who have contacted Amanda directly have told me that they are told ‘The legal framework to manage wildlife is set out in such a way that an individual land manager would apply for any licences to help manage protected bird species under specific circumstances. The Moorland Association is not a land manager and therefore it is hard to envisage it applying for such licences.’ which does not in any way contradict RPUK’s report that Amanda had said that some moorland owners were applying for licences!

Have a look at the comments on the RPUK post – particularly that of Philip Merricks  (who claims that he doesn’t normally comment on websites – he has made more than 75 here) and the response from the guys at RPUK. It’s all very interesting.

It’s also a week since the Peak District quietly slipped out the report on the lack of any success of its Raptor Forum. We still haven’t seen a statement from the Peak District National Park on this report, on the future of the failed Raptor Forum or anything else.  Why not? We guess that the Moorland Association is holding up any joint statement.

The Moorland Association has friends in high places, and low ones too. Have a look at its Twitter feed (@MoorlandAssoc ) and you’ll see that the Moorland Association had a parliamentary reception the other evening.  The photographed MPs attending were just the ones one would expect, quite a few of them spoke in the Westminster Hall debate in October 2016, Nicholas Soames, Richard Benyon, Kevin Hollinrake, Bill Wiggin, Simon Hart, but some did not, Kate Hoey, Sheryll Murray, Guy Opperman.  I love the photo with Bill Wiggin, Richard Benyon, Kate Hoey and Simon Hart all looking at a gamekeeper called Jimmy Shuttlewood – the expressions on their faces are priceless (a mixture of boredom and disbelief? Or might they be thinking, Jimmy Shuttlewood? Jimmy Shuttlewood? I’ll have to Google that name when I get home).

8 Replies to “News and no news from The Moorland Association”