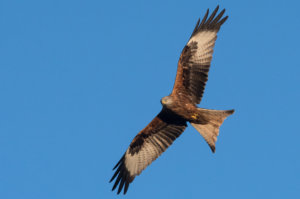 I’m keeping a note of whether I see Red Kites on each day through the year – in April the tally was 20 days out of 30. The grotty weather and spending a few days in London are probably the reason for the lower strike rate in April than in other months.

That makes 92 out of 120 overall. That’s a higher strike rate than I expected and goes to show that the Red Kite is a familiar bird again in east Northants.

I gave a talk to 6th formers doing Biology at a local school last week and they knew what Red Kites were and were animated when talking about them. Kites would have been a rare sighting for their parents and an unknown species locally for their grandparents, but these young people will see Red Kites most days if they look up and not down at their ‘phones.  I hope their children, eventually, will be able to be quite blasé about Red Kites overhead.  But I still get a thrill each time I see them because they represent how my baselines have shifted for the good.

9 Replies to “Red Kites in April”