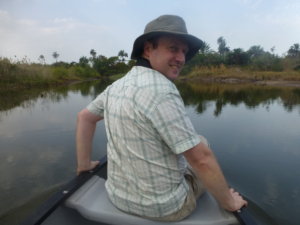 Richard Wilson is an independent professional ecologist with just under 20 years experience. When in the field, he specialises in invertebrate and avian ecology, with a smattering of botanical surveying thrown in for good measure. His background as a consultant has led to a keen interest in EU and UK law in the context of nature conservation. He is a full member of the Chartered Institute of Ecology and Environmental Management, a Chartered Environmentalist through the Society for the Environment and a Member of the Royal Entomological Society. He can be followed on Twitter (@ecology_digest)

Back in March 2015, I wrote a guest blog, ‘In Favour of the EU’ as a rebuttal to the alternative guest blog by Richard Wayre on ‘The case against the EU’. In my blog, I argued that remaining in the EU would be a much better course of action for the environment than leaving.  17 million people disagreed with me (and others) and a little over three years after my blog and just under two from the decision to leave, we are within touching distance of the departure gate.

Throughout this time, Mark has been campaigning on an issue related to Walshaw Moor above Hebden Bridge in Yorkshire that is geographically quite close to where I live. This has been brought to the fore through the commencement of legal action, which dramatically resulted in a favourable outcome for nature conservation and which resulted in Natural England being forced to concede defeat before any court appearance.  Mark’s 68th blog on this subject, setting out the background prompted me to submit this guest blog as its timing, presumably coincidental, arrived almost concurrently with a consultation issued by Defra on Environmental Principles and Governance after Brexit.

Like many environmental professionals, eyebrows were raised when Michael Gove was appointed Secretary of State for the Environment on the 11th June 2017.  Eyebrows were hoisted even higher when he started uttering comments that when listened to again, seemingly suggested he had the environment at heart.  As part of these commentaries, Michael made reference for the need to create a robust, advisory body to hold Governments to account. A sort of Nature Conservancy Council-cum-English Nature-cum-Natural England type of organisation with teeth…that bite. Nature conservation NGOs were agog with the direction he was wanting to take the UK post-Brexit.

Part of leaving the EU will inevitably require changes to how we address environmental issues; be they food production, nature conservation (biodiversity), air pollution, water quality and so forth; how to regulate these; how closely UK law should align with EU law on leaving and going forward; and who or what should oversee their implementation.  This latter point is the genesis of this short blog, which is the substantive element I discuss below.

As part of the post-Brexit discussions, Defra has mooted the need for an overseeing body or organisation that would hold Government to account.  Currently, this is the European Court of Justice (ECJ), which has sufficient dentition to impart a painful nip by way of financial sanctions on any Member State that fails to implement the relevant Directives.  And remember that the ECJ is moving towards the doctrine of ‘direct effect’ in the context of implementing Directives. In other words, where a Member State has not fully, or accurately (sufficiently), transposed in to domestic law the requirements of the Directive (i.e. the ‘journey has stopped short’), those provisions not transposed will be deemed to have been.

Last week, Defra published the awaited consultation on this overseeing body and on first and second appraisal, Michael Gove’s earlier warm sentiments towards the environment are revealed in stark contrast to what many commentators were heralding as a welcome change from previous Defra Ministers.  In my opinion, the warm words and initial actions, albeit very tokenistic and generally de minimis actions with regards to plastic pollution, have evaporated.  The consultation if it proceeds as written, may as well be a death certificate to the environment.

The main document fully supports my justification for remaining in the EU. Two examples of key drivers that underpin environmental due diligence (the precautionary principle and the polluter pays principle), whilst being transferred across to UK domestic law via the EU Withdrawal Bill (paragraph 26 of the Defra consultation document), will seemingly be expunged or significantly altered shortly afterwards. A cynical reaction, but not a surprising one in my view, but allowing the current Government to live up to its promise of transferring EU law across when we leave. On these and other principles, the consultation document expresses the Government’s intention (paragraphs 28 to 42) that they will be amended; and not for the better. Thus, it seems we can expect divergence from the EU acquis to a greater or lesser extent post-Brexit; the details of which we will need to wait until Autumn 2018 when the new Environmental Principles and Governance Bill is published.

What persuaded me to write this Blog in response to Mark’s Walshaw Moor campaign is the consultation’s text starting from paragraph 77 but particularly between paragraphs 95 and paragraphs 108. Paragraphs 77 to 94 sets out the status quo; paragraphs 95 to 108 what the Government’s intentions are; and it is the latter which is particularly pertinent to the Walshaw Case; and indeed any future case of equivalent significance.

As Mark points out, one of the drivers forcing Natural England’s hand is the case before the European Commission where it may take infraction proceedings against the UK Government over burning on a European Protected Site. The penalties if the UK Government are found wanting can be financially significant.  Therefore, I would like to draw attention to paragraphs 102 to 104 of the new consultation document. The Government’s intention is to restrict this new body, to issuing a non-binding advisory to the Government. In other words, for almost all examples of where a Government diverges away from environmental law and good governance, Defra are proposing that the ‘teeth’ will be nothing more than a communication, most probably in the form of a letter, asking (not requiring) the Government to think again.

Whilst there is a nod towards more meaningful sanctions (but only a binding letter), judging from the overall tenet of this section of the consultation, the Government are very hesitant in offering even this. There seems to be no comment on any further meaningful sanctions that could be applied.

Therefore, it goes without saying that after we leave the EU, and assuming the new Environmental Governance Bill becomes law in broadly similar terms as presented in this consultation, the scope to challenge poor environmental due diligence is severely and in my opinion, catastrophically diminished. Indeed, it would be pointless to pursue such an action, other than to make a pyrrhic point, as the greatest sanction that would in all likelihood be imposed would be a non-binding letter, asking (pleading?) with the Government to change direction, which would, in my view, fall on deaf ears.  In my opinion, this is an indirect consequence of what the Treasury anticipates will befall this country in economic terms once we leave the EU.  Regulation comes with a financial cost to business and the public purse, be this paying for environmental due diligence before planning to avoid, mitigate and compensate for habitat and biodiversity impacts; or for example, controlling emissions to reduce or prevent noxious discharges in to the environment. My interpretation is that post-Brexit, the economic pressures on UK businesses are anticipated to be sufficiently severe that relaxation of environmental responsibilities, which businesses are generally accepting, is perceived by the Treasury to require offsetting to compensate for this predicted downturn. This would be a very damaging short-term view that would have up to catastrophic effects on the UK’s, and quite possibly the EU’s environment (air pollution and wildlife don’t respect political boundaries or referendum results).

So returning to Walshaw, were this played out again after we leave the EU, the lack of any organisation that could impose a meaningful sanction removes the threat or motivation to change or alter the mechanism which is being challenged.  In this scenario, would Natural England have the will to even engage with the landowner? With no meaningful sanction available, the landowner could, in my opinion, continue with a damaging practice (as viewed through the lens of EU law and science) without risking redress.

Mark’s victory was a victory…but unless the consultation results in a significantly different outcome (or Brexit abandoned), the future looks bleaker; and would not leave the environment in a better place.  Indeed, I think we will very likely have crossed the environmental Rubicon.