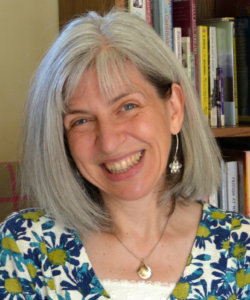 Anneliese Emmans Dean promotes learning through laughter, rhythm and rhyme with her award-winning science-meets-poetry books for children: ‘Buzzing! Discover the poetry in garden minibeasts’ and ‘Flying High! Discover the poetry in British birds’. She brings these books to life in interactive, edu-taining shows (for children and for grown-ups) at events, schools, festivals and theatres nationwide. Find her at: www.theBigBuzz.biz and @theBigBuzzNews (And occasionally at www.facebook.com/theBigBuzzNews)

It’s a Thursday evening in August and I’m sitting outdoors in a field in Rutland surrounded by people eating Andalucian paella. It’s not how I imagined Birdfair would be. But then, I’m not sure what exactly I was expecting it to be like.

Around this time last year I replied to a comment on this blog about the lack of kids’ activities at an event called Birdfair. I offered my services. I put on interactive bird shows for kids to inspire learning through laughter, rhythm and rhyme. I fit the bill.

One year later, here I am just returned from my first ever Birdfair, having put on three shows in three days. How was it for me? And, indeed, how was it for Birdfair, given that they created, for the first time this year, an area called the Wild Zone specially for children?

The enthusiastic joining in and giggling by my audiences (the children and their accompanying adults) was a complete joy. Ditto their reactions, feedback and conversations afterwards at my book signings. But they weren’t fabulously huge audiences. Partly because, as I have mentioned, I’m not Chris Packham. But also partly because there weren’t a vast number of children at Birdfair. 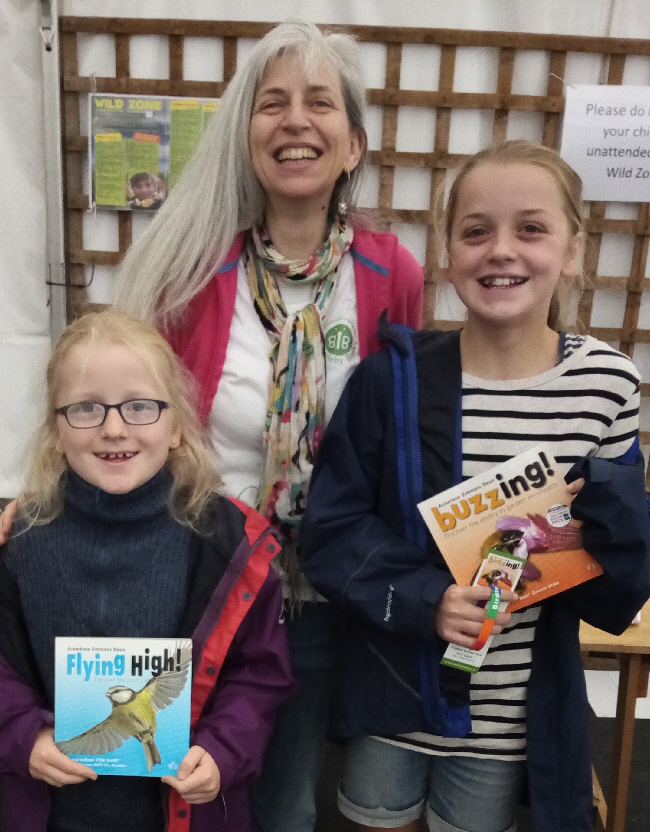 I’m not alone in having had relatively small audiences at the Wild Zone. I know of at least one event there to which no-one turn up at all. And another that had just three audience members.

I think this is – appropriately enough for a bird event – partly a chicken and egg situation. Because in the past there haven’t been, as I understand it, many specific events put on for children, people tend not to bring their kids. Almost every bum on every seat at my Flying High! shows belonged to a child I had accosted (in the nicest possible way, with their parents present) and personally invited to come along. I approached every child I saw. And there weren’t that many.

Hopefully things will improve in coming years, as word gets out that there are children’s events – indeed, a whole children’s area – at Birdfair. And the Wild Zone really was a great children’s area, with a host of free activities (led by lovely people) inside and outside the marquee, including willow weaving, clay modelling, colouring in, badge making, app demonstrations, plus the programme of speaker events.

Ah yes, the programme of events. Well, given the debate recently about ‘Big Names’ versus the rest of us, the good news is that the Wild Zone offered a completely level playing field. For example, I was performing on Saturday just before Mark Cawardine. (You’ll have heard of him. He has been on the telly!) Mike Dilger and Nick Baker also appeared in the Wild Zone marquee. (They’re also on the telly.) (And are all men. But that’s another Twitter debate …)

The gender balance in the Wild Zone marquee was good, with, in addition to me, Anya Wicikowski, Vicky Woodgate, Kate MacRae, Jess French and Lizzy Daly each presenting their own events. Of the five events between 3pm and 5.30pm on Saturday, for example, only one was by a man.

But how did visitors find out about these Wild Zone events? Assuming they hadn’t been accosted by me, how did they know what to come and see, and when? Before coming to Birdfair, Mark Avery (he of this blog) gave me some top tips. One of them was to dress down (I’m very pleased I didn’t turn up in the rather elegant dress I had had in mind), and another was to look through the programme in advance and highlight the events I wanted to go to.

I’m hazarding a guess that most of the people who looked through the programme to find the events they wanted to go to will not have seen the Wild Zone events, and so will have been busy doing other things in other places when our events were happening. That’s because the Wild Zone had its own, separate, double-page spread of events in the programme – after the end of the What’s on Sunday page. In other words, people will have closed the programme, having sorted their itinerary, before even finding the Wild Zone events.

There was a consensus amongst those I spoke with that having the Wild Zone events listed on the main What’s on pages (in addition to having their own spread), would have meant more people would have known we were there.

The consensus amongst all the people I spoke with about the Wild Zone in general was that it was A Good Idea, but that it would need time to bed down and for people to get to know it was there. Consulting with those who worked there over the three days would yield useful feedback to improve it further in future years. 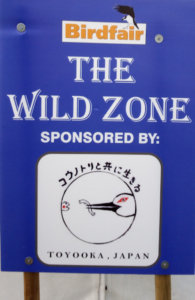 All the people I spoke with … Goodness me, I spoke with an enormous variety of people at Birdfair. That was one of the unexpected joys for me. By the end of the first day I had had conversations in five different languages. Well, that’s not entirely correct. Conversations in four languages, and mini-interactions in one, i.e. my long-unused, dredged-up Japanese. That was with the Mayor of Toyooka, Japan, whose city had sponsored the Wild Zone and whose extraordinarily inspiring film about the reintroduction of Storks into his region literally made grown men in the Wild Zone cry.

Conversations, conversations, conversations. And extraordinarily serendipitous meetings. Recounting them all would take several more blog posts. But for the purposes of this one, let me just say that being able to interact with a wide range of bird-interested people (from those you sit next to randomly on a bench to those running a stand you happen to pass to those you queue up a long time to talk to) make Birdfair a very stimulating and inspiring environment for kids.

Which is why I hope that more and more kids will come (or rather, will be taken there) as word gets out about the events (erm, and the chocolates) put on for them.

The chocolates? I didn’t know about them until one little girl proudly showed me all the chocolate freebies she had accumulated from various stands. She was a pro, having been to Birdfair in previous years. She knew exactly which stands to head to for chocolates!

I arrived home from Birdfair exhausted (I’d been on my publisher Brambleby Books’ stand when not performing in the Wild Zone) and with my bag bulging from the business cards of people I had met. (Note to self: take more business cards next time!)

The following morning I opened my curtains to be greeted by a sight in my little garden that I’d never seen in the 22 years we’ve lived here: juvenile Bullfinches (on our seed feeder). And my heart sang and my spirits soared. Which is what birds are all about for me. It’s why I do the work I do, getting children (and adults) tuned in to the birds around them, through laughter, rhythm and rhyme. As anyone reading this blog will surely already know, there’s a lifetime’s pleasure to be had for them as a result. 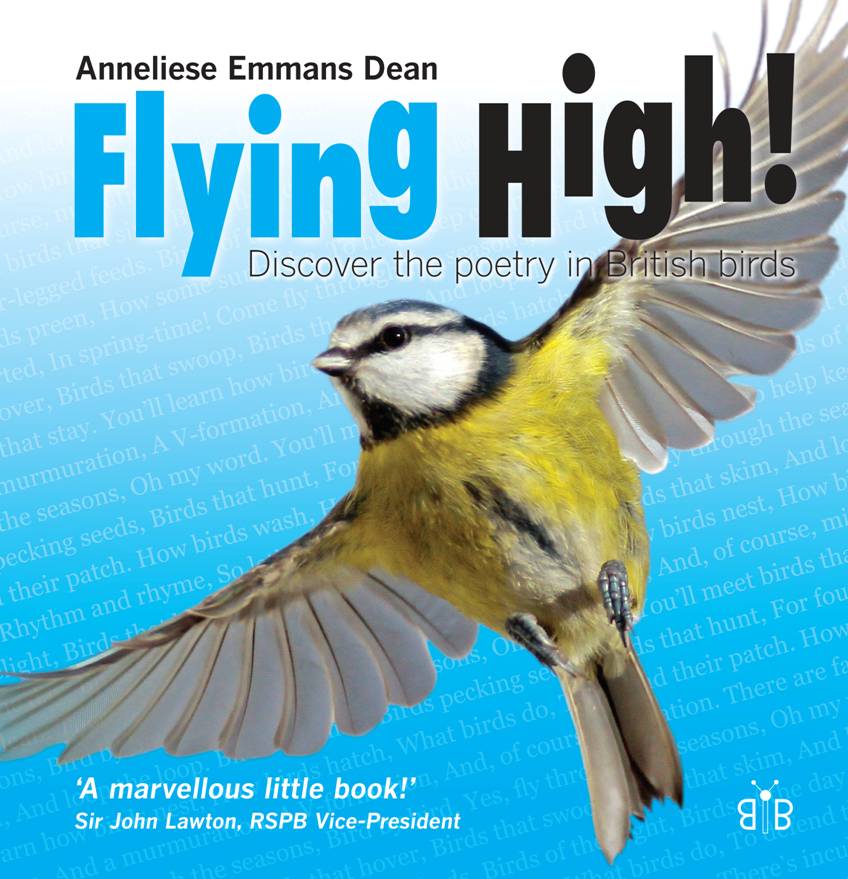