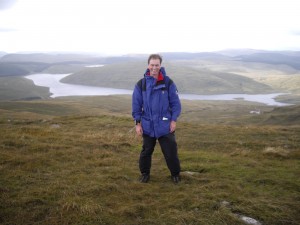 Andrew works part-time for the Countryside Council for Wales, and is also a part-time postgraduate student at Swansea University. The views expressed here are his own.

Recently, I found myself at some traffic lights when an enormous, gleaming, silver SUV pulled up along side me.  At such moments I am insufferably smug.  Here I am on my bicycle, saving the planet for all I’m worth, whilst some uncaring oaf sits behind the wheel of his CO2-belching behemoth.  But, as he roared away, I noticed a sticker in the back window.  It read “RSPB: For Birds, For People, For Ever”.

The Royal Society for the Protection of Birds takes a strong and responsible line on climate change.  It tells its members that it could eventually mean the end of mountain birds like the ptarmigan and dotterel, whilst many waders will go when their wetlands dry up.  Indeed, it claims up to a third of all plant and animal species could go extinct in the next 50 years .  Research from America suggests that extinctions as a result of climate change could be particularly severe in biodiversity ‘hotspots’ like the Amazon or Indonesia .  But many who claim to be concerned for our natural heritage, like that SUV driver, seem oblivious to the implications of their own behaviour.  Why?  They may not care about the drowning inhabitants of Kiribati or Bangladesh.    But there will be fewer birds to see.  This is serious.

Some birdwatchers drive incredible distances to see rare birds.  One claimed to have clocked up 78,000 miles in Britain in one year.  Another reckons he has driven millions of miles over the years, in pursuit of the next tick.  They are the extreme end of the spectrum, but most birders will admit to travelling many miles in the course of their hobby.  Some will visit the Scillies, Norfolk, the Scottish Highlands or Fair Isle on an annual basis.  Others indulge in year listing, which involves dashing around trying to see as many species as possible between January 1st and December 31st, only to start the whole futile process all over again the following year.  The information that birders collect, through schemes like the BTO’s Breeding Bird Survey, is vital to conserve birds and their habitats.  But that data is gathered by birders watching their local area and reporting what they find, not chasing across the country to see a bird found by someone else.

The birding community rightly condemns the tiny minority of twitchers who harass migrant birds or trample habitat.  But birders never consider the impact of their own travel on the planet.  In a saner world, driving 400 miles to see an exhausted waif that has just staggered across the Atlantic would be seen as incredibly irresponsible.  But we just regard it as quaintly eccentric.  In the unlikely event that I find, say, Britain’s first Mourning Warbler hopping around my home, I would feel justified in suppressing news of its arrival simply to save the carbon that would be burnt by birders coming to see it.

But it doesn’t end with bird watching in Britain.  Few of us can bunk-off work for a year to criss-cross the globe in search of birds, like a few individuals.  But open any wildlife magazine and you’ll find it stuffed with adverts, offering to whisk you off for a fortnight to anywhere you care to mention, in pursuit of birds, plants, insects, or wherever your interest lies.  When naturalists gather, the talk is of where they’ve been, what they saw, and where they’re going next.  Mention the phrase ‘carbon footprint’, and you just get a sheepish grin.

The penny has dropped with a few wildlife tour companies, who now claim to be carbon neutral through the process of offsetting.  It works like this: you travel as much as you like, but pay a small fee for someone in the third world to plant a tree, or get a slightly more efficient stove.  This supposedly saves the CO2 that you have blown flying half way around the world for a Spoon-billed Sandpiper.  You don’t have to worry about saving the planet.  Those nice people in Malawi will do it for you.

Of course, there are problems.  It will take your tree 60 years to grow to the point when it absorbs all that carbon.  Will it get cut down in the interim?    Was the land where your tree grows needed for other purposes?  Would the Malawians have had that efficient stove without your help?   Who knows?  But twenty quid is a small price to pay for guilt-free birding, so who cares?

Tackling climate change requires radical cuts in CO2 emissions.  There is no magic solution, no miracle technology coming to our aid.  It just means burning a lot less oil, gas and coal than we do now.  I can’t claim any moral high ground here. I’ve been lucky enough to pursue my interest in birds across Europe, North America, Southern Africa and Southeast Asia.  I once drove 100 miles to see my first British Little Egret.  In 1981 it seemed to make sense.  Little Egret was an exotic Mediterranean species, conjuring up sweltering days in the Camargue.  I needn’t have bothered; global warming means there are now hundreds on my local estuary.  But if we are really sincere about climate change, we can’t go on like this.

It’s time for those who say they care about the environment to start behaving as if they do.
This article is closely based on one which was originally published in the journal ‘Natur Cymru’.