Skip to content
On Saturday I had another visit to Duncan Farrington’s excellent farm. I was on the look-out for Turtle Doves as they used to be here but I haven’t seen, or heard, one for years in this spot.  Duncan’s farm looks good for Turtle Doves to me – plenty of thick nesting cover on the old railway line and a kinder approach to agriculture than some of his neighbouring farmers as Duncan is a LEAF farmer.

Now Duncan tells me that he saw a couple of Turtle Doves on his farm last week and so I was very keen to check it out. Not, I hasten to add, to check up on him but to see this now rare bird, in a Northamptonshire context, for myself.  It would please me no end if there were still Turtle Doves nesting close to my home, and that pleasure would be all the greater if they were on Duncan’s farm.

But I didn’t see (or hear) any.  I haven’t given up and Duncan and I have a cunning plan which I will reveal in due course if it comes to fruition. I did have a cup of tea with Duncan though and we talked about farming and birds.

Duncan tells me that last year was the worst year financially on his farm for many a year – this was almost entirely due to the weather. Duncan and I had chatted about this last summer when I had returned from the USA and was looking for Turtle Doves and writing A Message from Martha.  In fact, Duncan features in the last chapter of A Message from Martha (as do the NFU, the BBS, George Monbiot’s book Feral, the Bird Fair, the Hen Harrier, Liverpool Central Library and a cast of thousands).  Duncan and his farm have quite a big role in Chapter 8 (he’s mentioned on pages 264-8) as he is my very favourite local farmer (and the Mellow Yellow garlic mayonnaise is just delicious).  So I told Duncan he’d get his free copy of the book fairly soon as it’s published in the UK on 17 July. And Duncan told me that this year’s harvest was looking good, so far, fingers crossed.

But no Turtle Doves. 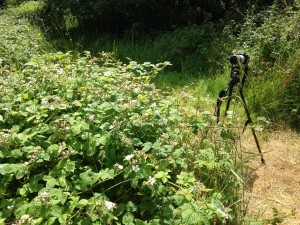 Butterflies, however, are easy peasy. I drove to Glapthorn Cow Pasture and spent 10 minutes or so looking at a Black Hairstreak butterfly about a foot away from me. This is my photograph of the bramble patch where the butterfly was actually sitting – can you see it? No, of course not – but it’s there somewhere. The photograph below was taken by Roderick Leslie at the same bramble patch in 1999 when we had an equally satisfying view.  Butterflies are easy!

Roderick reminds me that on that day in 1999 we saw a couple of Red Kites and a Buzzard.  Red Kites were becoming more and more noticeable in these parts then, thanks to a reintroduction project but they were not nearly as common as now. And the Buzzard was the ‘star bird’ –  still a rarity 15 years ago, yet I saw one from my bedroom window yesterday and thought nothing of it.

In those 15 years, Turtle Doves have become much rarer near me and Buzzards much commoner (no, there is no connection), but through that period Glapthorn Cow Pasture, a Beds, Cambs and Northants Wildlife Trust reserve has served up Black Hairstreaks in the same bushes for me just about every year.

Whereas Turtle Doves go to Africa and back every year, and Buzzards have spread into Northants from points west, Black Hairstreaks are stable in numbers and are restricted to c50 woods in the UK. They don’t seem to want to go anywhere.  Or should we think of them as being imprisoned in their few safe strongholds? They seem to be the agoraphobics of the butterfly world.

I do wonder what happens to Black Hairstreaks as climate change exerts a greater impact on our countryside. Will they ‘want’ to move north but not be able? Will future generations of us be moving Black Hairstreaks ‘up north’ because they can’t manage to fly across a few open fields themselves?

I’d miss seeing Black Hairstreaks on the familiar bramble patch each year.  Butterflies are easy – but maybe life is tough for them.

1 Reply to “Butterflies are so easy”