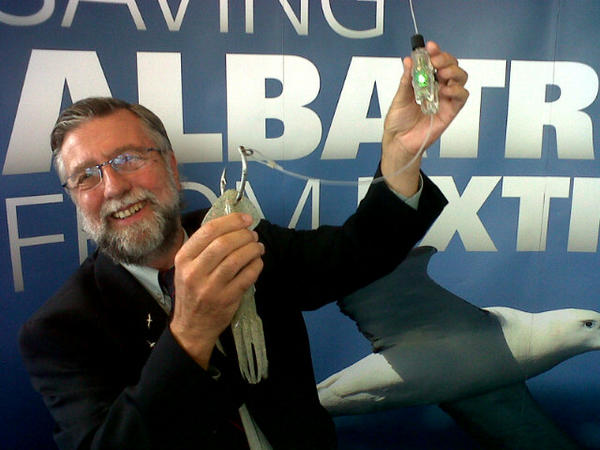 David Agombar is Major Donors Manager at RSPB where he has worked for the last 12 years inspiring individuals to fund many vital conservation projects. Not the least of these is the Albatross Task Force. He is a bit of a seabird enthusiast having worked on the Farne Islands in his younger days. He is also a Director of a new company called Hookpod Ltd, set up to produce and market Hookpods. These have the potential to eliminate seabird deaths caused by pelagic longline fisheries.

The threat of extinction to some species of albatrosses is well known; 15 of the 22 species are listed by IUCN as endangered. The largest cause of declines of many seabird populations is interactions with the fishing industry; notably in pelagic longline fishing where baited hooks are set behind boats on long lines suspended in the water column that can be up to 85 miles long.

The danger point is when the hooks are set at the stern of fishing vessels they float for a while and seabirds see an easy meal, and then are caught on the hooks before being dragged under water to drown. 300,000 seabirds are estimated to die this way each year and 100,000 of these are albatrosses. It does not have to happen.

In 2006, the RSPB and BirdLife International set up the Albatross Task Force to work with fishers, showing them measures they could take to prevent seabird deaths. From one instructor working in South Africa, there are now 18 working in eight Southern Hemisphere countries. The methods they encourage are bird scaring (tori) lines, line weighting and night setting. We know these work when they are used but we don’t know how often they are used, unless there is an observer on board.

Now a new solution has been found; The Hookpod. This is a clever British invention that is permanently attached to the line behind every hook enclosing the barb when it enters the water, only releasing the baited hook at 20 metres depth, where most seabirds cannot reach. This has been trialled and improved with input from fishermen in Brazil, South Africa, Australia and Japan. It has the potential to eliminate seabird deaths in pelagic longline fisheries.

A new company, called Hookpod Ltd, has been set up to develop, produce and market them and it is now reaching a critical point. We want to produce 20,000 Hookpods to seed the fishing industry in Australia, New Zealand South Africa & Brazil. To do this we need to raise over £100,000 and have set up a page on the crowd funding website ‘Kickstarter’
take a look here.

By joining forces and getting involved in this project, you could play a vital role in supporting a clever British invention that will eliminate seabird deaths in pelagic longline fisheries.