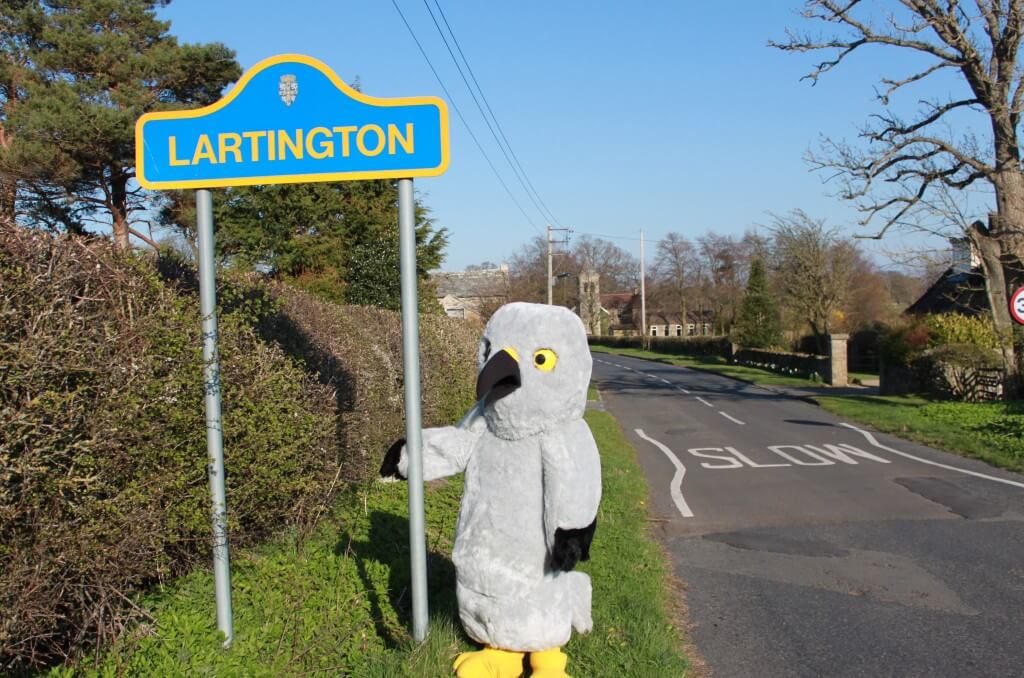 Henry asked me whether I’d had a reply from Rules restaurant about the provenance of their game meat and the amount of lead that is contained in it (and see here, here and here for previous bizarre correspondence on this subject). I’m afraid that London’s oldest restaurant, which specialises in game, is remarkably tight-lipped about where it gets its game and what it thinks about the science which shows that game meat contains high levels of lead.

Henry wouldn’t be seen eating in a restaurant that is tight-lipped about the meat that it sells. Surely a restaurant ought to be proud of its produce and of its suppliers? Of course, Henry might be seen outside such a restaurant.

So we paid a visit, on our travels in the north of England, to Lartington where Rules has an estate.  There wasn’t a lot to see, except a few Pheasants squidged on the road.

But Henry wondered how Marks and Spencer was getting on in deciding whether there are any sources of sustainable grouse meat from which they would be prepared to source meat and be up-front about it.  I wonder too. See here and here for M&S’s decision not to sell grouse meat last year because of doubts about its sustainability.

Let’s just remember, last year there were just four pairs of Hen Harrier in the north of England and the science shows that there should be over 300. The lack of Hen Harriers, a bird fully protected in law for over 60 years, is due to illegal persecution by grouse shooting interests.  Any restaurant that sells grouse meat should be able to reassure its customers that it sources its grouse with this issue in mind.

With that in mind, I’ve written to a number of other London restaurants which I believe serve grouse, asking them about the sustainability of their grouse meat.

This is what I sent:

I am considering bringing a party of friends to your restaurant in the autumn as we would be interested in trying Red Grouse.

As I’m sure you know, Red Grouse are native British birds which are shot on moorlands in the autumn.

There are a number of issues about the sustainability of the production of grouse meat and so I am asking your views on them to help me make my choice of restaurant.

Legal issues: the Hen Harrier is illegally persecuted by grouse shooting interests. There should be 2600 pairs of Hen Harrier in the UK and there are only c800 pairs.   Hardly any Hen Harriers nest successfully on land managed for grouse shooting. From which estates do you source your grouse meat and what steps have you taken to ensure the legality of their practices?

Land use issues: a major scientific study published by Leeds university (amongst other studies) suggests that the management of land for grouse shooting increases water pollution, reduces aquatic life, increases flood risk and increases greenhouse gas emissions. What is your response to that?

Lead levels in game meat: grouse are shot with lead shot. As the lead shot passes through the flesh of the grouse tiny particles of lead flake off the shot and distribute themselves in the meat that might end up in your restaurant and on my plate. Lead levels in game meat are high, and half of game meat bought in UK supermarkets and game dealers has lead levels that would be illegal in beef, pork, chicken etc. You may be aware of the strengthening of the Food Standards Agency advice on game meat? What steps have you taken to reduce lead levels in the grouse that you sell, eg have you asked your suppliers to move away from using lead shot and to use non-toxic ammunition instead? Have you warned your customers about lead levels in the meat that you serve them?

I’ll be interested to receive your response and compare it with other London restaurants. This letter will be posted on my blog, as will any response or lack of response from you.

10 Replies to “Henry knows the Rules!”