As climate change worsens, the expected range of the Red Grouse will shift north, perhaps leaving northern England altogether, at least those are the predictions of climate change modelling (see, for example, here). But in the Daily Mail (and only the Daily Mail as far as I can see – editor Paul Dacre, grouse moor owner) the headline says that Red Grouse have got to Iceland.  Crikey!, I thought,  ‘They must be frozen!’, and they are!

And these grouse go on sale in a short while, before the start of the shooting season so they are well and truly frozen, having been shot at least as long ago as 10 December 2014.  Mmmm! Yummy!

The British grouse industry, spokesperson apparently Sir Ian Botham, is desperate to increase the sale of their product in order to make it seem less of a toff’s hobby and more of the working person’s Sunday lunch. Well, good luck to them on that one! 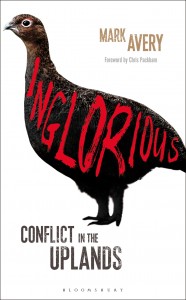 Iceland will have thought long and hard about this business decision of course, and it couldn’t have been made because the boss of Iceland, Malcolm Walker, is apparently keen on shooting and apparently (again) shooting off his mouth with a few expletives. So it couldn’t possibly be that Malcolm Walker is selling frozen grouse in his stores because he is a shooter and Paul Dacre is mentioning it in his paper because he is a shooter, could it?  Maybe Iceland got a job lot of unsold grouse from M&S who decided last year, very wisely, not to sell grouse meat in its stores because it couldn’t vouch for the sustainability of their production. Nothing has changed on that front in the last year but we await M&S’s decision this year with anticipation – and some nervousness on my part – as I have enjoyed spending money in my local M&S since they announced they won’t sell grouse and would miss it if I had to boycott them again.

Iceland says: All Iceland brand products are clearly labelled on the back of our packs with a full and honest list of our ingredients, and information on their nutritional value.

This blog asks: will Iceland label their Red Grouse as probably having, on average, ten times the lead levels (a poison) as would be legally allowed for other meats?  Will Iceland add a food safety warning in line with Food Standards Agency Advice, which we assume Iceland are aware of, but in case they are not it goes as follows, ‘The Food Standards Agency is advising people that eating lead-shot game on a frequent basis can expose them to potentially harmful levels of lead. The FSA’s advice is that frequent consumers of lead-shot game should eat less of this type of meat.’?

This blog asks: will Iceland name the shooting estates from which their Red Grouse are sourced so that the public can make up their own minds on their quality? How are their game suppliers approved and by whom?

Iceland says: Iceland respects the environment.  Our efforts to reduce our environmental impact are co-ordinated by a cross-functional team, working closely with external partners including the Carbon Trust, WRAP and the British Retail Consortium Environmental Policy Action Group.

This blog asks: did Iceland not read the EMBER study or the remarks from the Climate Change Committee’s report of last week?  How does selling Red Grouse add up to respecting the environment?

Still, I spent yesterday talking to a small group of people in the food trade who were shocked at the continued use of lead in game shooting (it’s a poison you know) and at the unsustainable nature of intensive grouse moor management.  The wind of change is blowing…although maybe not in Iceland.

4 Replies to “Red Grouse get to Iceland”