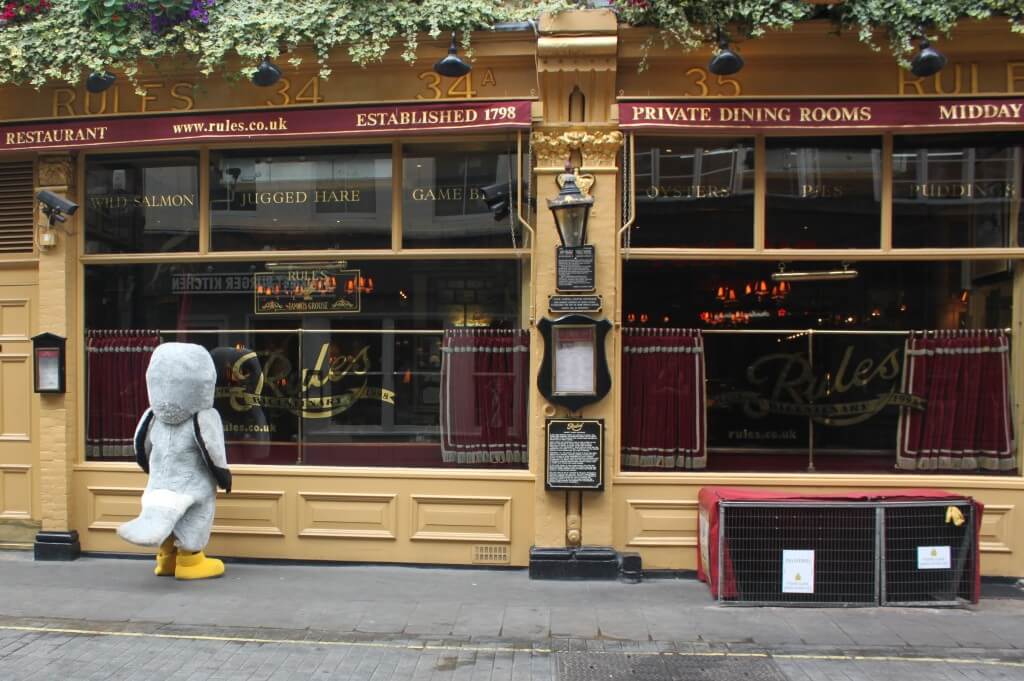 On a recent trip to London, Henry (you didn’t think he’d gone away did you?) looked in to Rules restaurant.  Now Rules has a very strange attitude to customer care (see here, here, here) and although there was initial friendliness from some of the waiting staff someone looking more senior started closing curtains and shooing Henry away.

So Henry was glad to find that Rules had a day out with the Countryside Alliance the other day, so that their staff could learn about the grouse that are an expensive feature of their menu. I’ve emailed Rules again to remind them of the questions that I posed them months ago and that other customers might ask them about grouse meat – how do they ensure it has been produced sustainably? what do they tell their customers about the high lead levels in game meat and the advice of the Food Standards Agency?

I’m glad that Rules is swotting up on the subject of grouse – they should read Inglorious for a short account of the lead issue (pp132-135).

They may also want to give a glance to this campaign by the League Against Cruel Sports to get Red Grouse off the menu.

Tom Quinn, Director of Campaigns for the League Against Cruel Sports, said: “The collateral damage caused by getting a grouse to the table leaves a nasty taste in the mouth. Over the last few years, restaurants have quite rightly started to pay attention to sustainability and by-catch when it comes to the fish they serve. But there are massive problems with by-catch when it comes to grouse, and we’re hoping that when they realise this, the restaurants will refuse to serve grouse dishes after August 12th.

People are given the impression that shooting game for the table is a healthy, sustainable and environmentally-friendly way of providing food. It is none of those things. The grouse themselves are often injured rather than killed outright, causing suffering, and the birds on the table will inevitably contain lead shot which is a health hazard to humans.

Millions of other animals and birds are deliberately killed to protect the grouse shooting industry. The environment is being devastated by the burning of grouse moors, and millions of tonnes of lead shot are left to poison the countryside. Add to that the fact that tax payers are subsidising the shooting industry to the tune of several million pounds per year, and it all adds up to the Glorious Twelfth being nothing more than a shallow PR attempt to hide what is an atrociously out-dated and unsustainable practice.”

An account of my visit to Rules with a couple of mates last autumn can be found on pp239-240 in Inglorious- conflict in the uplands (the long-time, No 1 best-seller on Amazon UK in the category target shooting – what a hoot!).

And Rules is just one of the many locations visited by Henry on his travels – a brief review of which can be seen in this fantastic video mash-up (is that really what these things are called? How odd!).

PS And I bet you are wondering what the second best-selling book on Amazon UK’s target shooting category is, aren’t you? Well, often it is the Kindle version of Inglorious (what another hoot!) but sometimes it is Tarquin Millington-Drake’s A Year on the Moor.

3 Replies to “Henry knows the Rules”