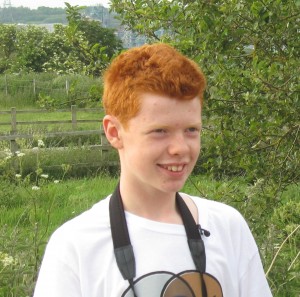 Back in June this year, I posted a series of guest blogs on the theme of “13 Years Wilde” on my own blog WildeAboutBirds. I asked a selection of people that I know, and who have inspired me in some way, to write a blog about their relationships with nature when they were my age, 13. What started out as just a curious interest in what other people were doing at my age turned out to be something so much bigger. The 19 fantastic blogs were written with such honesty and feeling that it has been impossible not to be moved by them. I must just say a massive thank you to them all for taking the time to think back and put so much effort into their guest blogs.

There were some really clear themes that came out of the blogs and this is what I want to share in this guest blog, and also look at how it all compares to being 13 years wilde today.

Before I get into the themes that came out of the blogs, I just want to talk about the fact that only two of the blogs were written by females; Lucy McRobert and my head teacher Miss Brandreth. There has been quite a bit of interest in this and I never really thought about it when I was asking people to write the blogs. I didn’t deliberately choose to ask mainly males to write the blogs, it is just a fact that most of the people I have met throughout my natural world journey so far have been male. However, in the people I interact with about nature, who are about my age, there is quite an even split between males and females.

Reading back through the blogs, I found that there were 4 main themes that kept coming up; the “lost years”, the power of a single interaction with nature, the comforting, healing side of nature and the importance of having a great mentor or people willing to support and listen to you.

The Lost Years
Quite a few people wrote in their blogs about how they thought it would be easy to write about their relationships with nature at 13, but then realised when they looked back, that 13 was probably when they started to become the most disconnected with nature. Dr Rob Sheldon wrote “I can’t remember the specific timing, but it was when I was about 13, my interest in birds and wildlife waned.” Lucy McRobert wrote “In fact, thirteen was probably the turning point when I stopped caring as much about nature until I was in my second year of university.” This wasn’t the case across all the blogs of course, but it was a common theme.

13 seemed to have been a tricky age for a lot of the guest bloggers. In fact, most of their years at high school were full of intense choices, or at least choices that felt intense at the time. Any hobbies you had were no longer accepted and seen as normal, the education system didn’t (and still doesn’t) do much to encourage engaging with the natural world and you became more worried about what your friends were thinking, or what they said.

I see this as a big issue if we are ever going to change peoples’ attitudes about how to safeguard the future of the natural world. All of the guest bloggers who suffered the lost years did come back to nature in some way later in life, but sadly this is not the case for so many others. The lost years are some of the most important learning years of our lives, but so few people my age understand the extent of the damage the human race is doing. For me, it needs and has to be a core subject across secondary schools and room can be made for it in the national curriculum. Let’s all start thinking 500 years ahead not just 5 years ahead. But that’s a blog post for another day.

The Power of a Single Encounter
There were so many great examples in the guest blogs of how a single interaction with nature has stayed in people’s memories. Jules Howard wrote “I remember only a single really meaningful encounter with nature at 13 and it was quite short and simple.” It was migrating frogs that did it for him. Miss Brandreth wrote “I remember sitting one night by the back door and, in the light of a full moon, Shep and I held the gaze of a beautiful fox which stared at us motionless for a few moments.” Chris Packham wrote “I remember my first Whitethroat, Grasshopper Warbler and nearly bursting when I saw my first roding Woodcock.” And Martin Harper’s guest blog starts with the opening line “It was a dandelion seed that did it.”

I am sure most people reading Mark’s blog have a wildlife encounter that stands out in their minds. That was one of the great things about the guest blogs, the open sharing of experiences that so many of us can relate to in some way. I bet most of you have some strong pictures in your mind of a simple, but amazing engagement with nature.

Nature – a safe place to turn to.
There were some very dark times in quite a few of the blogs which I found quite hard to read and have thought about quite a lot. In all these examples it was shown that the natural world helped give people somewhere to escape to or a way pick themselves back up again.

Stephen Le Quense wrote “I look back when I was 13 and I see a troubled, fragile 13 year old, who was determined to do well at school but who sought out the outdoors as a place of safety, a place of refugee, where I could escape and feel free.” Lucy McRobert wrote about her mum dying “If I’d been connected with wildlife throughout my teens, it would have brought me such comfort.”

I’m not exactly sure why nature can be such a comfort to people, but I think it is because everything just fits together and works together and goes on about its business with such a focus that you sort of just get lost in it. That’s how it is for me anyway.

The Mentors
Many of the guest bloggers wrote about the difference having a mentor made in their teens. Andy Clements (Director of the BTO) wrote “So, how did I get from those shaky first steps to here? Like so many others it was the influence of an important mentor, mine in the shape of my biology teacher Barry Goater.”

For me though, the blog that most summed up the importance of a mentor was the one written by Douglas McFarlane. Nature had been a big part of his life until the sudden and unexpected death of his dad. Douglas wrote “his death hit me hard sending me into a very destructive circle of violence and petty crime”. But fortunately for him Mrs Hapkiss at his school came along and didn’t give up on him. One of the most moving lines in his post was “We visited Snettisham and nature shocked me and left a gobby teenager silent and awe struck at the sheer numbers of birds (Knots) flying in formation, something I hadn’t seen since the Starlings at Pizza Hut in London, it must’ve triggered some sort of subtle memories as I actually for the first time since my dad’s death broke down in tears, 14 months after his death I was finally and properly grieving.”

Imagine if we all had a Mrs Hapkiss in our lives; imagine if you could be a Mrs Hapkiss! There are so many youngsters out there, me included, who need supportive mentors and people that can help, guide and sometimes just listen.

So What’s It Like Being 13 Today
Well quite a few things haven’t changed. Adolescence still seems to be difficult (I know I am finding it tough at times), and whatever your interests are, they are still viewed by some peers to be unpopular. Matt Shardlow put it brilliantly in his guest blog by saying “Adolescence is our own metamorphism”. Any part of any interest can get judged unfairly by your peers; have you got the right brand and colour of footy boots, have you got the latest gadgets.

But I do think there are easier ways to find other people that do share your interests these days. Social media has introduced me to a massive group of like minded people that constantly reassure me that I am quite normal in what I am choosing to do. Having said that, as much as we are free to roam the internet, we don’t get the true freedom to roam the countryside as others did back then.

Mentors are just as important now as they were back then, but from my experience I don’t think there are as many of the traditional types of mentor as there were seen in the guest blogs, such as the ones in school. I have also been unfortunate to encounter mentors that have discouraged rather than encourage me, by having very strong opinions on how I should be engaging with nature, rather than guiding and letting me find my own way. But I do meet a lot of great people when I am out and about who are more than happy to share their experience, knowledge, scopes and biscuits!

Mentors are so important. The natural world has a better chance of becoming important to 13 year olds when those with the power to have an influence make it a priority and explode its possibilities. You don’t get into or out of nature. You’re surrounded by it all the time, but too many people “choose” to bypass it or other people remove it for them.

But I think the one big thing that hasn’t changed, and I hope won’t ever change, is the power of nature to pull you in when you really aren’t expecting it. Those moments that make all your senses come alive and you know that you have just experienced something so special, that you will still remember it years and years later, as all the guest blogs proved.