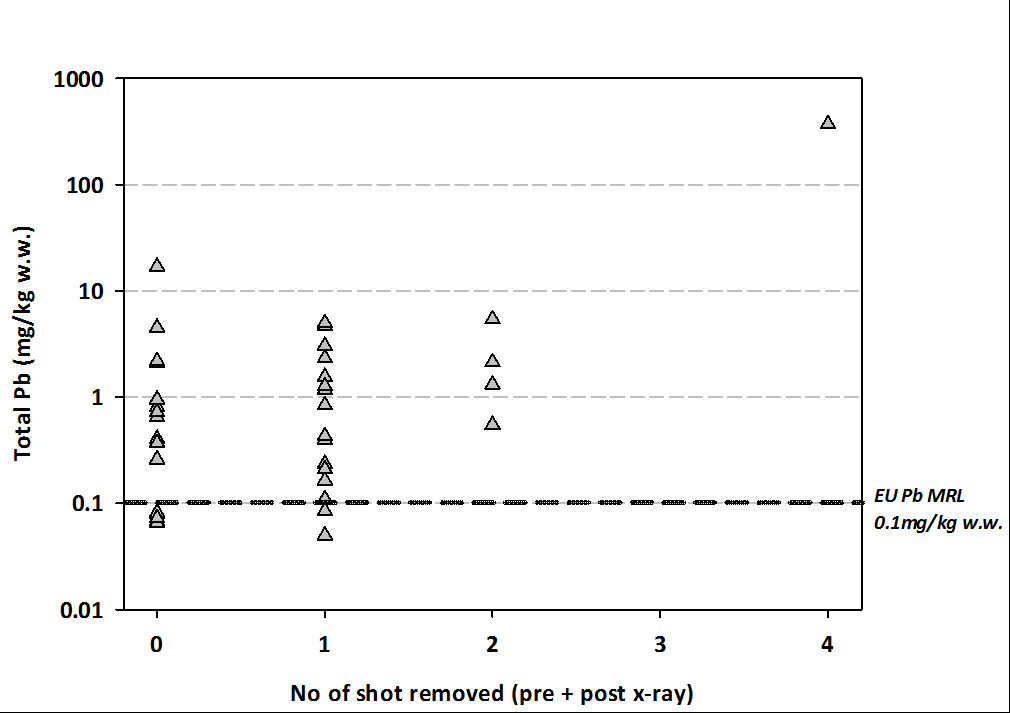 OK – so these are the data.

Remember, all the shot were removed from these samples, by a combination of searching by hand and eye and then X-raying the samples.  These lead levels refer to the lead left in the meat after the lead shot is removed – caused by tiny shards and fragments of lead coming off the pellets (see Lead Week, 3)

What proportion of Red Grouse bought from Iceland Foods, when tested for lead levels, would have been illegal had they been beef, lamb, chicken etc? Answer 31 out of 40 (78%). 31 out of 40 samples are above the dashed line (a few are superimposed on each other – but count them and you’ll get a good idea).  If this meat were beef, pork, chicken etc all the points would have to be below the dotted line. Why is there no MRL (maximum residue level) set for game meat which, after all, has lead shot into it?

What proportion of lead levels in Red Grouse meat bought for human consumption from Iceland Foods  were at least ten times the maximum residue level (MRL) for beef, pork, chicken lamb etc? They are easier to see, count the points above ‘1’ on the Y-axis – 15 out of 40. That’s more than a third of samples (37.5%) have ten times the maximum allowable level for lead in non-game meat.

And as you can see, there is one sample that had over 100 times the legal maximum lead level (but less than 1000 times) for non-game meat – 168 times, actually.

And that single sample up in the top right corner? That’s above 1000 times the legal maximum lead level for beef, pork, chicken, lamb etc – in fact it is at 3699 times the maximum level (though because it is game meat there is no maximum lead level set – rather strangely).  That is a lot of lead to find in a meat sample.

I’ll let you digest that for a while.