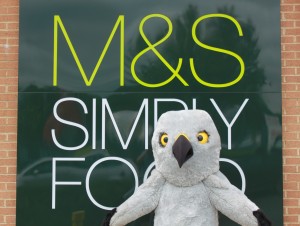 M&S announced today that they intend to sell Red Grouse meat this year – I had asked them following previous years discussion (2014: here and here; 2015 here and here).

Today I asked M&S some questions.

Here are their answers:

‘Our team have worked with the RSPB and the Game and Wildlife Conservation Trust to launch an industry leading ‘Code of Practice’ to ensure all our game, including red grouse, is sourced to the highest standards of game rearing and moorland management, from a small group of estates that we know and trust. Our red grouse will be sourced from a single estate in Scotland.

It is also our requirement that estates operate to the industry’s Code of Good Shooting Practice and the Defra Codes of Practice for the Welfare of Game Birds.

Lead shot is the most humane way to shoot grouse. We ensure lead shot is not used near any water courses and our policy on lead shot follows the Food Standards Agency guidelines and is clearly detailed on our packaging.‘

The self-styled ‘industry leading’ Code of Practice hasn’t been sent to me.  This is the closest I can find on the M&S website which mentions the Code of Practice but doesn’t actually say what it is. I’ve asked M&S for a copy, as a customer – well, maybe not for much longer.

I asked the RSPB to comment on this matter early this morning but they haven’t yet got back to me – but it will be interesting to see whether the RSPB welcomes the potential sale of Red Grouse by M&S and give this a big thumbs up.

M&S require the estates supplying them to stick to the law – that’s good. How do they check?

What checks do M&S put in place to monitor the potential cocktail of chemicals that might end up in Red Grouse meat – see this cracking blog, of today, by Raptor Persecution UK?

‘Lead shot is the most humane way to shoot grouse’ – I wonder where that came from? And does this mean that M&S will require all suppliers to use toxic ammunition rather than non-toxic ammunition? Do M&S sell shot waterfowl? Are they going to stop selling these as it would be illegal for them to be shot in England, and in most circumstances in Scotland, with lead ammunition? Do M&S sell shot venison – and do they reject those shot with copper bullets?  M&S do not appear to know what they are doing on this tricky subject – they are tying themselves up in knots.

M&S has not disclosed the estate from which they intend to source their grouse.

M&S game policy is in a mess.  Let’s see whether they can come to a sensible position in the next few days, shall we.