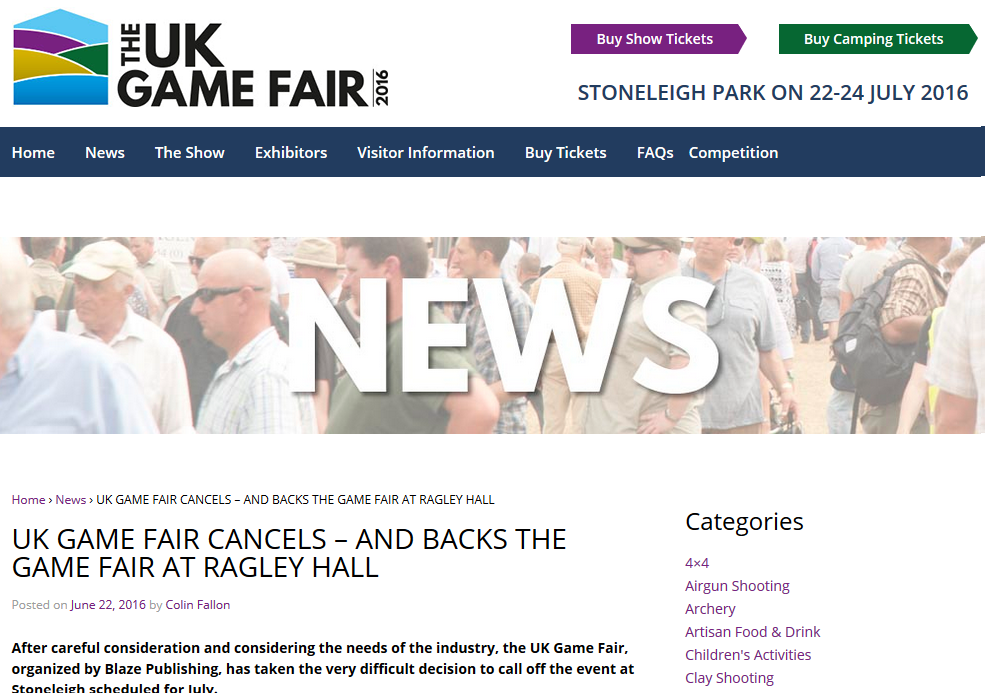 After Henry’s visit to the Game Fair last year the CLA admitted defeat and ended the CLA Game Fair. This year there are several game fairs on the go but the ‘UK Game Fair’ has fallen by the wayside, presumably in anticipation of the Brexit result. That’s a shame as I was going to have a couple of debates on something or other with someone or other, and although I have been offered the alternative gig at ‘The other game fair’ at Ragley Hall I can’t make that as I am already booked for a much bigger gig.  But if I could have attended, I would.

We still wait to hear whether the Defra minister Rory Stewart will accept the Bird Fair’s invitation to debate whether driven grouse shooting will be banned with Natalie Bennett of the Green Party and myself. It is taking the minister a long time to decide whether he can explain his department’s policy on this issue but let’s hope, that after careful, but not prolonged, thought he will find it possible to meet birdwatchers at their annual gathering.

The tadpole conservation lot, as I have already told you, have found it impossible to field a defender of driven grouse shooting. That’s very odd. Now, after much thought, the Chair of the Hawk and Owl Trust, Philip Merricks, always a shy and retiring character, has declined the invitation to speak in front of an audience of potential Hawk and Owl Trust members at the Bird Fair too. That’s really, really odd.

But never fear – we have an excellent speaker who has confirmed that he will speak – but I will keep the identity of this dark horse under my hat for a while in case anybody seeks to nobble this runner.

I have gladly spoken at previous Game Fairs, NFU meetings and the like on dozens and dozens of occasions, in cases where I didn’t expect to have a wholly sympathetic audience.  But it seems as though the wonderful ‘sport’ of driven grouse shooting is finding it very difficult to find a champion to speak on its behalf. But surely the minister will say yes? Won’t he?

When HIGNFY was once let down at the last minute by a Labour MP panellist they substituted him with a tub of lard. We may have to have a pile of empty cartridges speaking up for grouse shooting if grouse shooters themselves find they don’t have any ammunition.

4 Replies to “No ammunition?”