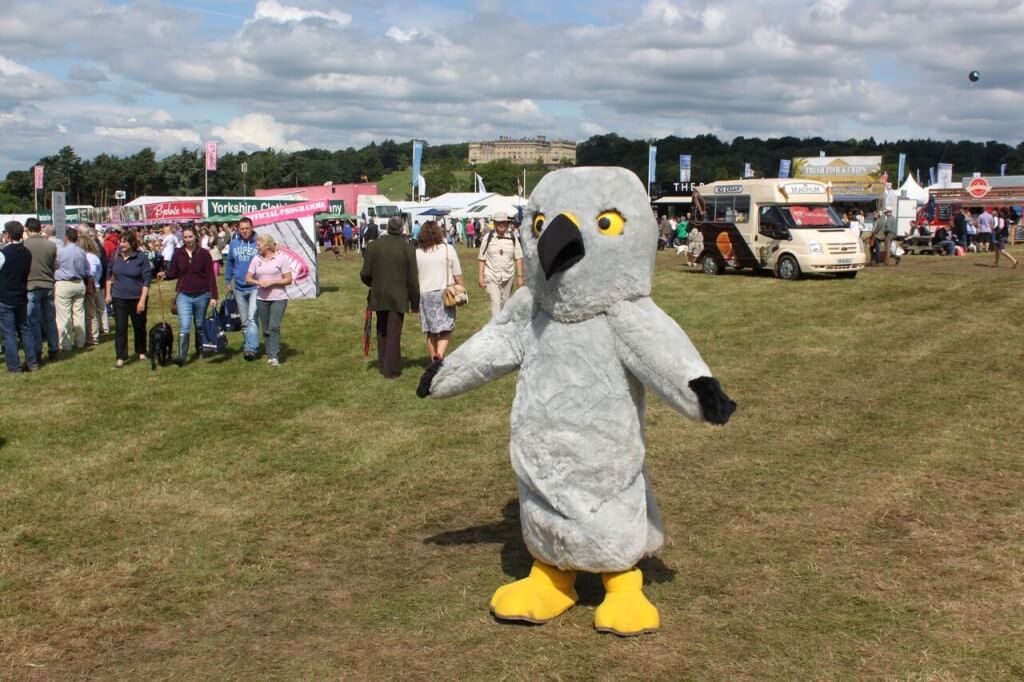 I’ve been to many Game Fairs but this was Henry’s first.  He was a little bit nervous but he had a gaggle of burly minders with him. As well as myself there were Lawrie and Phil from BAWC and Alan Davies from The Biggest Twitch.

It was a rather quiet Game Fair I felt, fewer exhibitors and fewer people than usual – we were there on the very sunny Friday – but under the surface there was plenty going on.

I was at the Game Fair for a debate with Owen Paterson (ex Sec of State Defra), Philip Merricks (Elmley, and chair of Hawk and Owl Trust) and Ian Coghill (of the TGC(W)).  In return for entering the lions’ den the CLA gave me lunch (of which more later) and a couple of entrance tickets so I thought I’d take Henry along for free, thanks to the CLA.  Henry says ‘Thank you, CLA!’.

Our first stop, even before out first bacon sandwich, was at the RSPB stand. 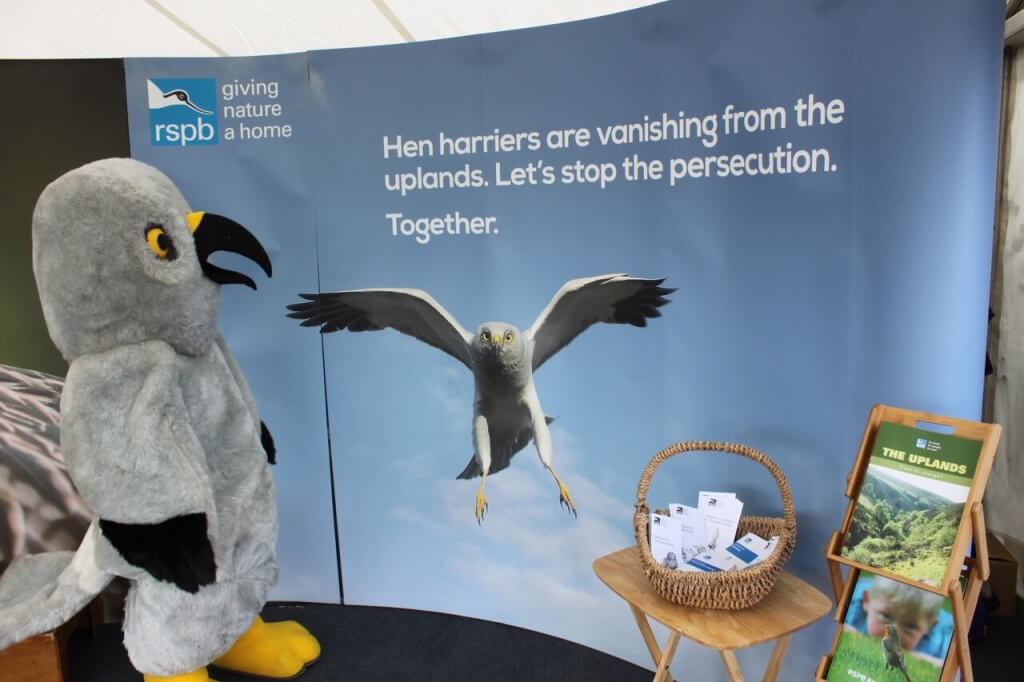 Henry felt he was amongst friends here (and he was). The RSPB even had a photograph of Henry – just look at the expression in the eyes of the photographed male Hen Harrier – Henry to a T.  It’s uncanny.

The RSPB had put some noses out of joint that day by releasing the text of what their Chief Executive Mike Clarke was going to say at an RSPB event later in the day. You can read what Mike said here. The RSPB questions the wisdom of releasing tens of millions of pheasants into the countryside every year and points out that burning the uplands has been shown to be rather a bad thing. You can see why BASC and others were a bit miffed.

But the most interesting part of Mike’s speech was possibly a reminder that the RSPB does not yet support a ban on driven grouse shooting followed by ‘But the longer it takes any industry to address its problems, the stronger those calls will become.‘.

The RSPB has been under attack, off and on, for about nine months from a group of shooters fronted by ex-cricketer Sir Ian Botham, and funded by the British grouse industry.  The RSPB is showing admirable restraint in not yet supporting a ban on driven grouse shooting but Mike is right – the calls for a ban are getting stronger all the time and you can add your voice here. The ‘logic is impeccable’ as one reviewer of Inglorious (a book about why we should ban driven grouse shooting) wrote earlier this week.

Next stop was our friends at the (W)TCG (even The Fidel – a well known shooters’ magazine (see later) can’t believe the GWCT’s name). 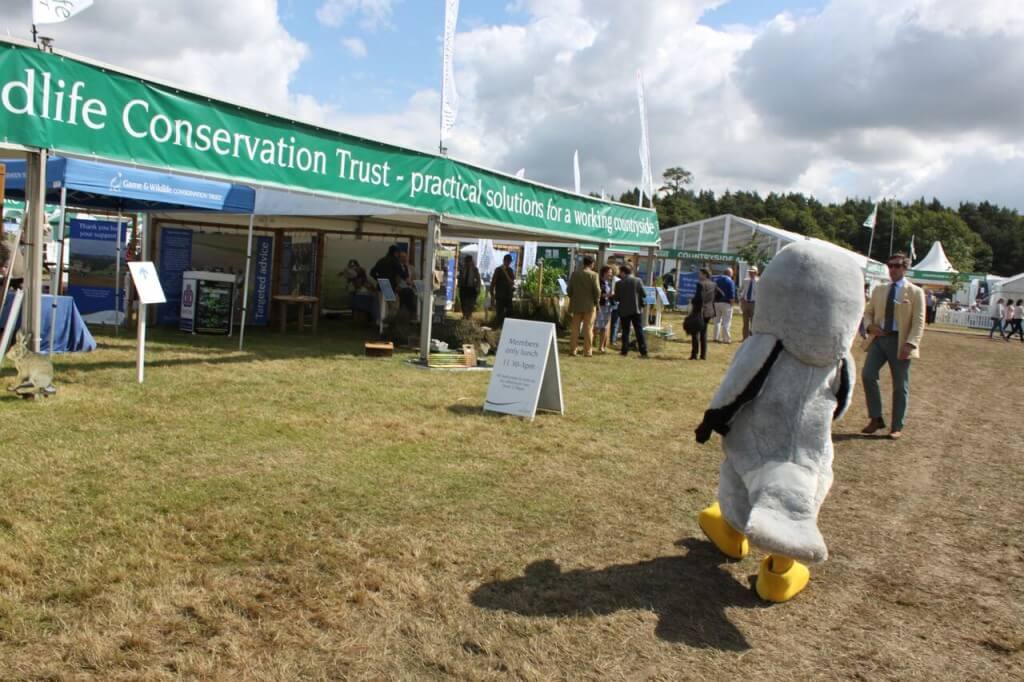 As we arrived, the CLA President Henry Robinson was doing a walk about and glad-handing the exhibitors. Here he had a chat with Teresa Dent, the Chief Exec of the G(W)CT but made a swift exit when Henry arrived (exit – pursued by a Hen Harrier? Well it makes a change for the people to ‘disappear’ instead of the male Hen Harriers these days!).

Teresa then fled too – and I thought that the G(W)CT were keen on Hen Harriers?

A few steps up the road we found the Countryside Alliance. 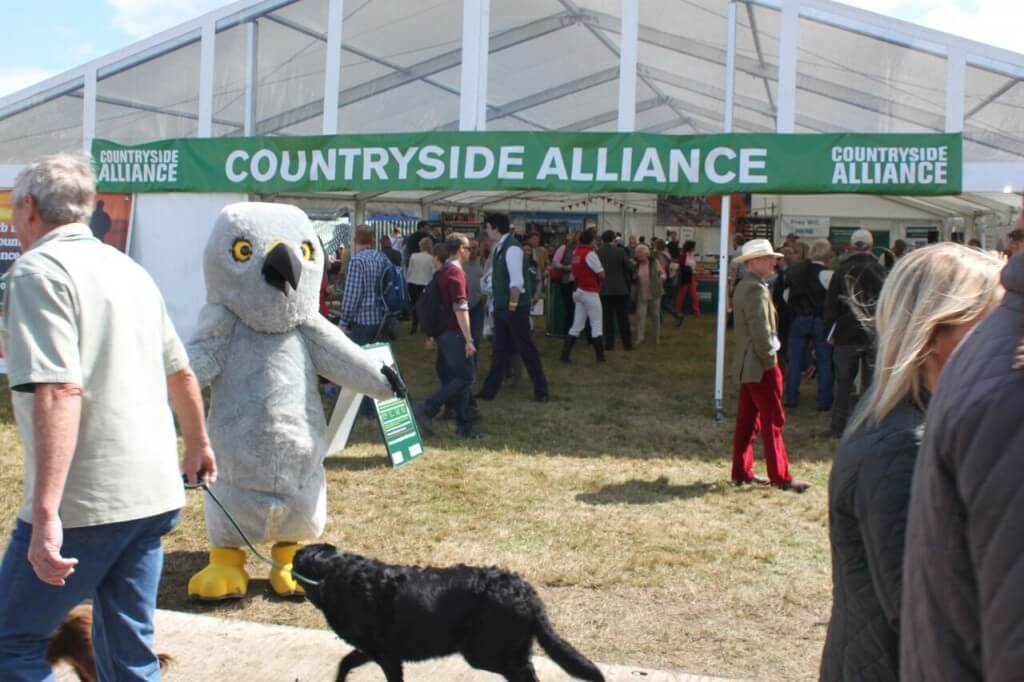 As we arrived we saw the CLA President being ushered out of the back of the stand – did he think we were chasing him? I hope not, Hen Harriers go for much smaller prey.

We met a few other folk and said ‘Hello!’.  Isn’t this Charles Nodder the political advisor of the National Gamekeepers’ Organisation? I do believe it is. 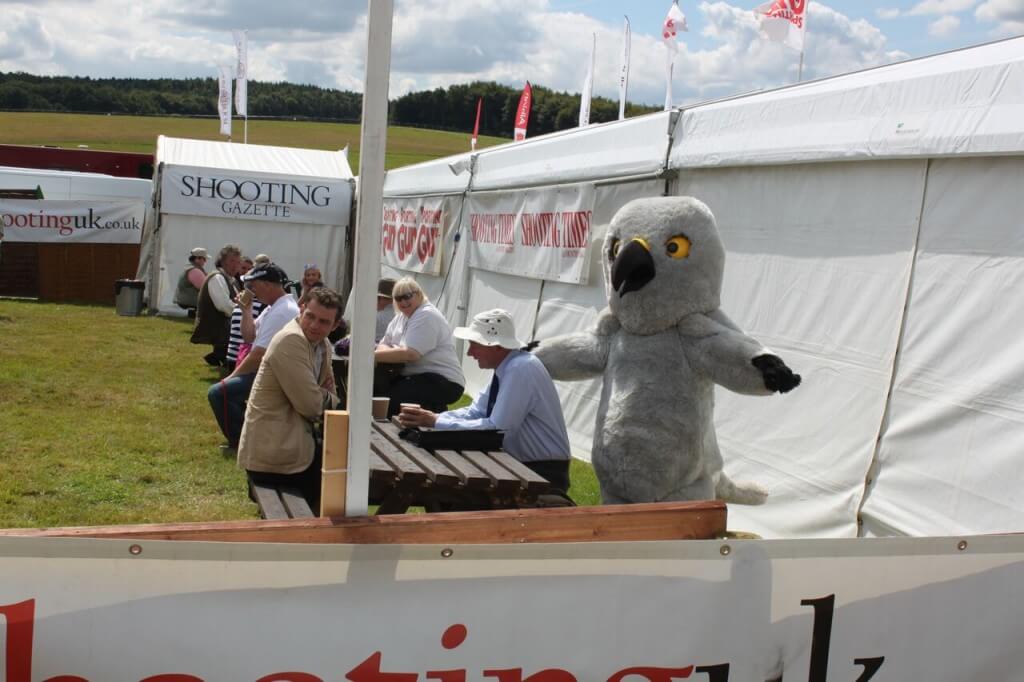 And then we met Amanda Anderson and her Chair, Robert Benson, from the Moorland Association – they were good sports. 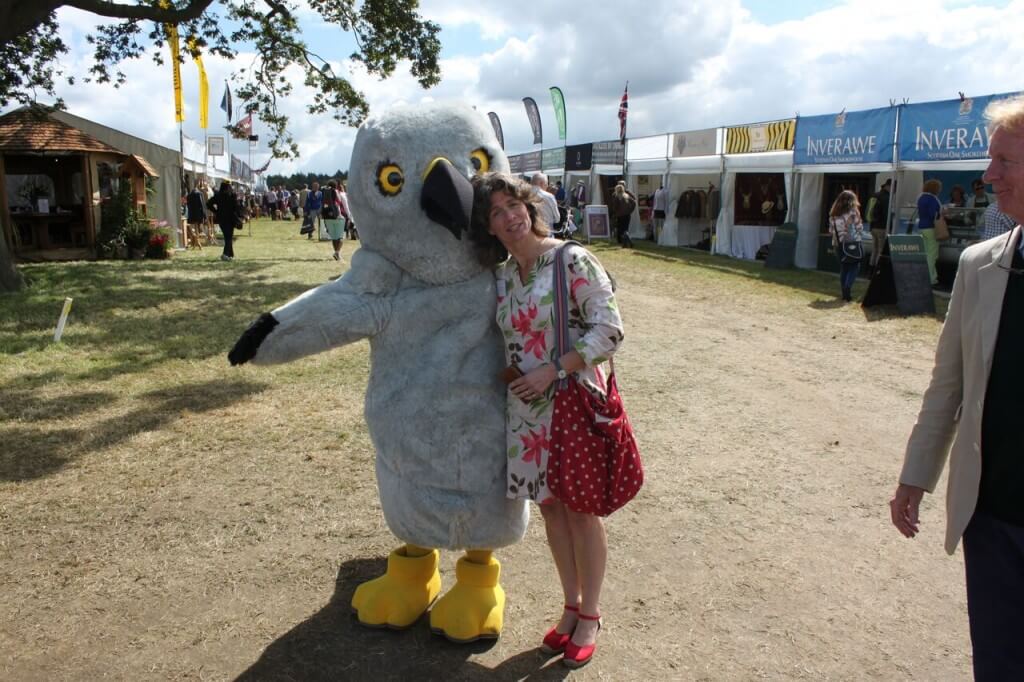 Duncan Thomas of BASC was in finger-pointing mood, as often, and I love the expression on Alan’s face as he listens to a load of boloney about how five male hen Harriers ‘disappeared’ through being disturbed by the people protecting them. 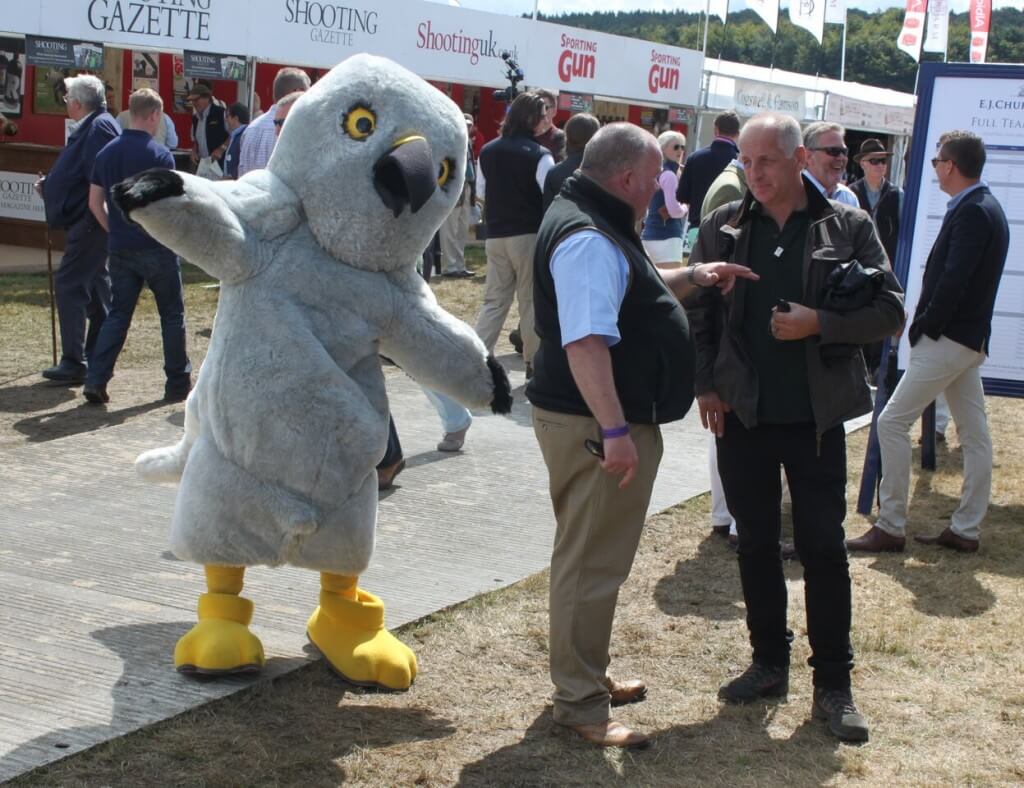 Henry doesn’t look too disturbed though. 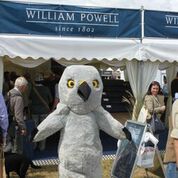 And then on to William Powell, shooting agents, where we decided not to ask for a photo opportunity with Mark Osborne (who was holding forth to a group of what looked liked potential clients).

But enough of all this jollity! I had work to do – I was going to a debate.

But first, there was lunch, and before lunch we just said ‘Hello!’ to The Defil, a magazine for Game Fair attendees for sure. 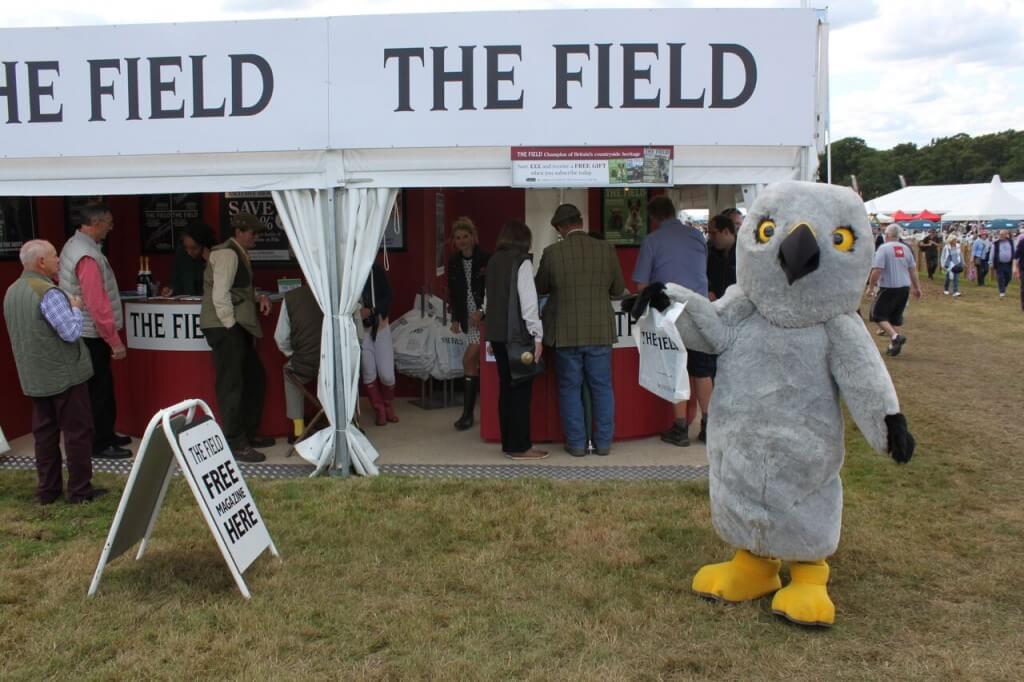 And then I had to leave Henry for a while as I was taking luncheon in the CLA Members’ enclosure, in fact with the Vice President and his guests.  I had to leave Henry, pining, looking over the picket fence that separates the members from the hoi polloi at the CLA Game Fair. 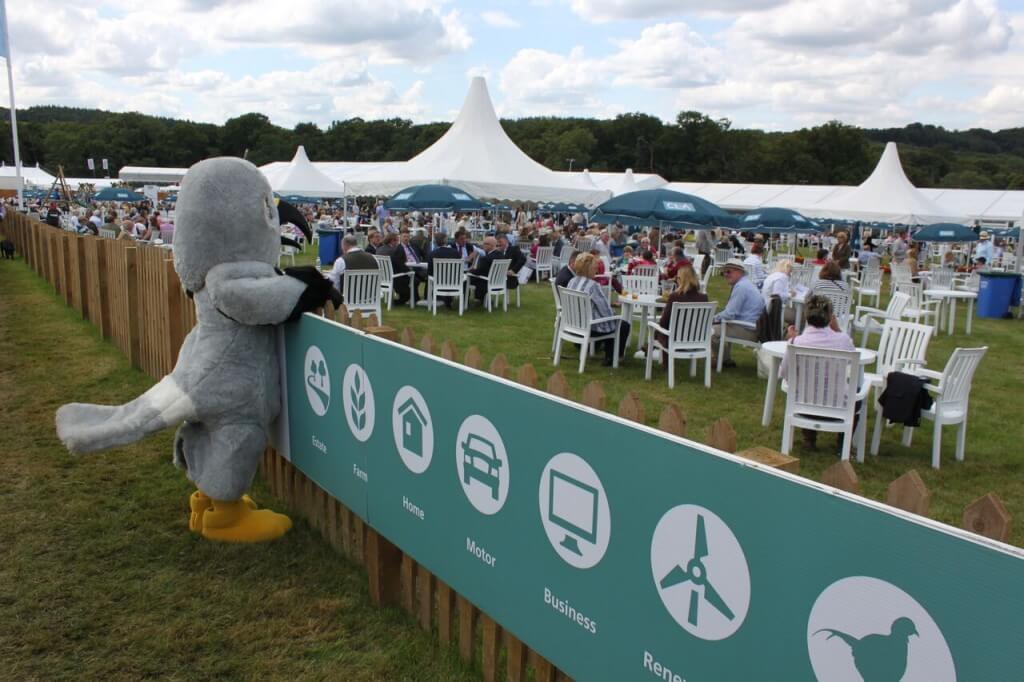 I had a lovely lunch sitting between Kate Green (Country Life) and Nigel Farage (UKIP). Kate was seated between me and Owen Paterson, she said to stop us using up all our arguments over lunch! But the debate, which I will touch on in a moment, wasn’t an event of great fireworks or blood on the Harewood House grass – it was all very civilised really.  Even tame. Perhaps a little dull.  Sorry!

Philip Merricks and I chatted to Nigel Farage and he was very good value. We mostly turned down wine but Nigel went for a beer, and then he nipped out for a fag half way through his pork. He told me that he was going grouse shooting later this autumn and I told him a few reasons why he shouldn’t and then we moved on to the EU and Europe. All very interesting and rather jolly. I had the chicken caesar salad –  I wonder what Henry found to eat.

Then we were off to the debate about whether wildlife and land owners were friends or foes. Of course they are neither and both, it all depends. 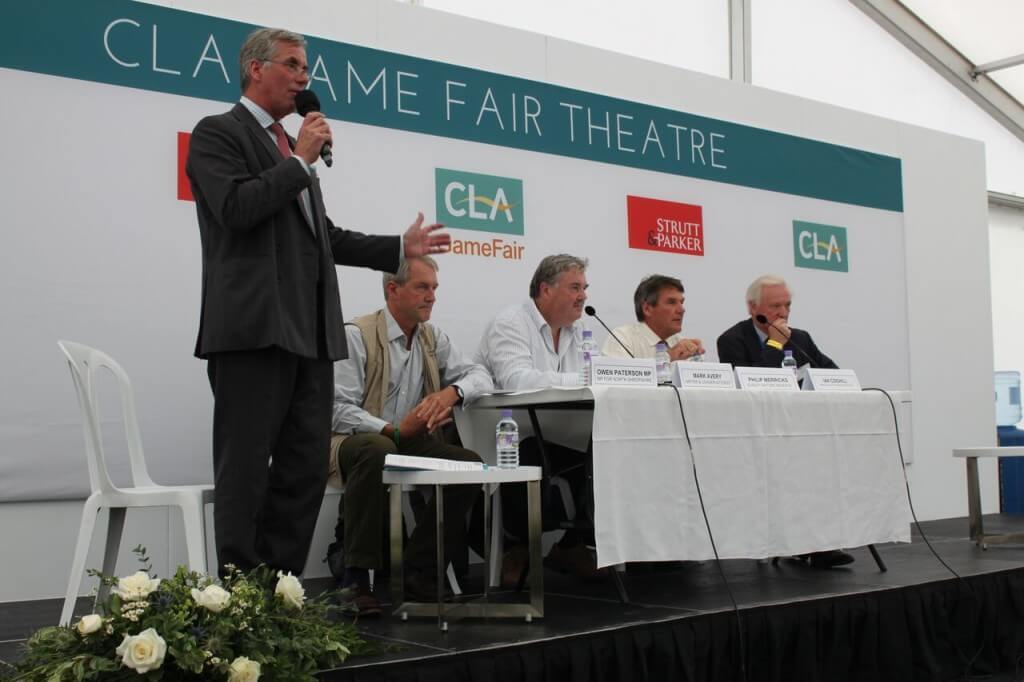 As I said on the day, I rather admire Owen Paterson, even though I don’t agree with him on many things (although we agreed quite a lot at the debate), because he is a politician with opinions (many of them wrong) which he has thought through (though not enough) and then acts on. I wish there were a few more Labour politicians like that.  And that’s why lunch with Mr Farage was interesting – he came across as genuine and thoughtful, even though I don’t agree with him very much either.

At the end of the debate lots of people wanted to buy my book but I had to tell them that the CLA hadn’t allowed my publisher to arrange a book signing, so the crowds went home disappointed and to spend their money on Amazon instead where Inglorious is the 2621st best-selling book in the UK at the moment (and no doubt, only for a brief moment).

I must tell you about the conversation with a group of people who didn’t actually introduce themselves to me but were keen for a chat. There were two women (one was silently disapproving of me – I thought – and the other was charming ) and two blokes (neither of whom was charming).  The charming woman was very keen to buy Inglorious and had a grouse moor in Durham – I’m sure I would have talked to her for ages. One of the chaps kept telling me that it was a well known fact that the RSPB plants poisoned raptors on people’s land, and so I told him that they didn’t when I worked with them, and I very much doubted they did now – but he was adamant. I suggested he should take it up with the RSPB.  The other chap demanded a ten-sentence reason for banning grouse shooting so I, not unnaturally, suggested he bought my book on the subject but he told me that he didn’t read books. Before I could say something similar, the charming woman pointed out that he might not be giving the very best impression of grouse shooters and I had to smile. I started on my ten sentences but the other chap kept banging on about the RSPB so, with regret, I had to bid them goodbye and headed off to the aforementioned RSPB stand where the aforementioned Mike Clarke was making his speech to a rather small group of people – the event having been boycotted, apparently, by BASC and the CLA in a fit of pique.

The Derbyshire Police Commissioner, Alan Charles, also spoke, as always, with passion about wildlife crime. Maybe that’s why so few shooters turned up – the truth can hurt.

But I met two of my favourite grouse moor owners and had a long discussion with George Wynn Darley and a lovely chat with Sir Anthony and Lady Milbank too.

All in all it was  very good day. The e-petition to ban driven grouse shooting is scooting along, Henry went into the lions’ den and wasn’t ‘Ceciled’, the supporters of grouse shooting are clearly very rattled by the focus being put on their ‘sport’ and are finding credible responses difficult to come up with.

The sun shone, the bacon sandwiches were good and the friends of Henry had a lovely day out.