To get a flavour of the type of debate that our e-petition on banning driven grouse shooting might receive, have a look at the transcript of the Westminster Hall debate on badger culling. I sat in the debate last week, on Wednesday afternoon, as a member of the public.

This debate on badger culling had a format which is similar to that which our debate will have; an introduction to the subject from the MP who secured the debate (or in our case, from a member of the Petitions Committee), short speeches making points from interested MPs (perhaps your own MP), interjections from other MPs (perhaps your own MP), a 5-minute speech from the SNP, a 5-minute speech from a Shadow Defra minister (who knows – they all might have changed after the Labour Leadership result) and then 10 minutes from a Defra minister.

These debates are chaired by MPs from the Speaker’s Panel – in this case it was Conservative MP Anne Main.  There is a large digital display which shows how much time remains for the debate and how much time for the person on their feet at that moment.  The Chair (in this case and always) is pretty strict with time keeping. The debate ends precisely on time. No vote is cast; no decision flows from such debates (at least not directly) – they are an opportunity to raise issues.

The public can attend, as I did. The public gallery (two benches at the end of the room) can only sit c25 people (it was packed for the badger debate). Another room can be used for public viewing with a feed into a screen in that room. The debate can be seen live over the internet. The debate is transcribed verbatim and appears in Hansard within a couple of days of occurring. Those words then sit there, on the record, for ever. 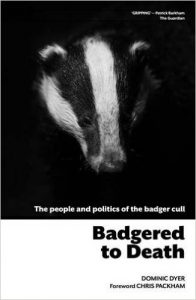 My best guess is that our debate, or the debate on our e-petition to ban driven grouse shooting, will take place at the very end of October or in early November.

And so on to the badger debate (where Dominic Dyer was sitting near me, taking lots of notes – read his excellent book on the badger cull).  You can read the transcript so here are a few thoughts from me:

The e-petition opposing the badger cull has reached and passed 40,000 signatures, with support so far being concentrated very much in the southwest of England.