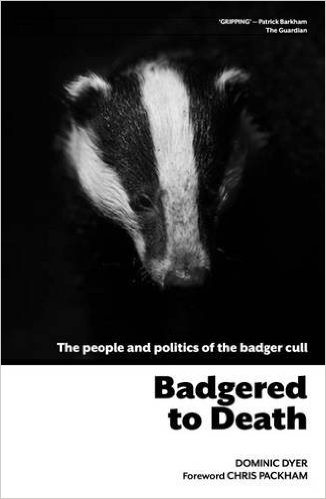 I enjoyed reading this book and I strongly recommend it to you. This is a powerful and stimulating read and it’s bang up to date with the important issue it discusses.  It is written by a passionate insider with years of experience.  The narrative is pacey and exciting.  This book arrived with me on Thursday afternoon and I had read it completely by early yesterday morning.

This is a very political book – but then I like politics, and nature conservation comprises a very political set of issues.  If you are labouring under the misapprehension that everyone loves the natural world then read this book for a sharp jolt to your preconceptions.

I’ve known Dominic Dyer for quite a few years – he used to head up a disparate bunch of agrochemical companies and I always thought his heart wasn’t completely in it – and then he popped up in nature conservation (and it took me a while to realise it was the same bloke!).  He is a very good public speaker and that often, but not always, translates into good writing, and in this case it has.

The book is about the politics and people of the Badger cull – just as the subtitle says – and reading it almost made me nostalgic for the days when I was meeting the ministers and civil servants, and politicians and journalists, and other players who were involved in the issues about which Dominic writes.  As someone who has done similar work at a similar time then I can assure you that this book paints an accurate insider picture of how advocacy and campaigning is conducted and the obstacles thrown up by industry and government to block progress. You might be shocked by some of the revelations.  You might cringe at the power of the NFU and the tactics it employs.  You might take a different view of vets as a profession after reading this book.

I’m interested in politics, in the sense of how to change the world, and I enjoyed these aspects of the book, which make up a large part of it.  I think Dominic over-eggs the importance for David Cameron of getting the NFU and rural votes onside ahead of the 2010 general election as he almost seems to believe that it was the promise of Badger carnage that swept the Conservatives into power whereas the Iraq war, global financial meltdown, a Labour administration that had run out of steam and the British electorate’s desire for a change of inadequate politicians now and again probably had more to do with it. But that’s a minor quibble.

Dominic has a go at the environmental NGOs – as is customary these days (because they are a rather disappointing bunch) – but in a very strange way. It is Greenpeace, FoE and WWF that come in for criticism for failing to rise to the campaigning challenge but the National Trust, Wildlife Trusts and RSPB don’t get a mention – neither positive nor negative.  This seems rather odd and I had been looking forward to seeing whether the part played by them (and partly in the time when I had something to do with it) would get a good kicking too but the wildlife NGOs are written out of the script (although the fact that the Wildlife Trusts have the Badger as their logo is mentioned).  There must be an interesting story, of some sort, behind this omission.

The book ends with a series of pen portraits of people who have helped Dominic in his battle, losing at the moment, to stop Badger culls. This was a good idea and was brought off well, with campaigning personalities like Brian May and Chris Packham, and journalists like Patrick Barkham and Jonathan Leake, as well as a whole bunch of individual campaigners, being given credit for their role in the actions. This was a very nice touch.

Coming back to the subtitle of the book – ‘the politics and people of the badger cull’ – it is notable that it is not ‘the science, politics and people of the badger cull’.  Now although I have paid a certain amount of attention to the arguments over the cull of Badgers, I found the book very useful in reminding me of pieces of evidence that I had read or heard of, or bringing new information to my attention, but nowhere is the science laid out and explained in any detail. Bits of the story crop up here and there in a tale of advocacy and politics but the science is never brought together in one place at all clearly.  I think this is a shame. And it is also a great shame that the book contains no ‘further reading’ or references – it’s as though one is supposed to take Dominic’s interpretation of the issues totally as gospel and there is no need for further study or thought.  I found that surprising and a touch disappointing.  I wanted to go away and read some of the important studies after reading the book and I expected them to be signposted.

And it isn’t completely clear what Dominic does think of the science. When I got to the end of Chapter 8 (page 77) I read that the Badger was an ‘innocent victim of political and economic failures’ and I thought, in passing, ‘Well, of course the Badger is innocent but am I meant to think that it plays no part in spreading bovine TB, even if it is only a minor part?’.  And then a few lines on I read ‘…we have no reliable evidence that they [Badgers] play any significant role in giving it [bovine TB] to cattle’.  Really? I suppose it depends on what you mean by ‘significant’.  But it seems to me that the best bit of science done on the subject is probably the Randomised Badger Culling Trial (which the author praises ) and that did show an impact of Badger culling on reducing bovine TB – but only a small one.  But also, it showed a ‘perturbation effect’ – which is an increase in bovine TB cases in areas near the cull zones. Badgers which escape the cull (some always will) disperse to new social groups and those that have TB (a small proportion) take the disease with them.  You can’t have a perturbation effect without Badgers spreading TB to cattle.  For me, science takes too much of a back seat for this book to be a completely satisfying guide to this hot topic, and that strikes me as being the main weakness in what is otherwise a fantastic book.

And don’t get me wrong, I oppose the Badger culls. I oppose them as being unjustified scientifically because they are dealing with a small part of the problem in a very expensive and inhumane way and would need to be carried out over vast areas and for long periods of time to have any impact at all – and that would only be a small impact. We should have invested more in vaccination years ago (and incidentally, that is what the RSPB said at the time) and we should invest more in it now. The book is short on solutions too – it is very much a story of opposition to something (the cull) – but that’s what the subtitle says.

If you liked my books Fighting for Birds (which covered a wider range of conservation subjects) and Inglorious (which could be described as the grouse moor and Hen Harrier equivalent of Dominic’s book), then you may well like this book. If you hated my books then please give Dominic’s book a chance anyway, it is a great read.

It’s a dull point, but there are far too many typos which ought to have been spotted by someone – let’s blame the publisher not the author! – but there are an awful lot of them, and that looks a bit shoddy.

This book is timely in that this government has just extended badger culls to more places and so if you sign up to the main message of the book, that these culls are a waste of money, a waste of Badgers and at best a partial and inefficient way to reduce bovine TB then you will be hopping mad right now – and reading this book won’t calm you down, it will energise you.  One outlet for your energy is to sign the e-petition that started a few days ago and has already reached 34,000 signatures that calls for an end to the cull.

Badgered to Death by Dominic Dyer is published by Canbury Press.