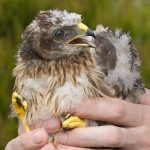 Rowan the Hen Harrier ‘was likely to have been shot’ – likely? That’s an odd phrase and it’s been bothering me (and others, I see).

I tend to start from the supposition that all Hen Harriers are likely to be shot and have to keep telling myself that there are other perfectly natural causes of death too (and a few more unnatural ones). I worry about Finn the Hen Harrier because she feels almost like one of my friends, and I worry about Bonnie because even if she is named after the boss of the Countryside Alliance I certainly wouldn’t want her to be shot.

But when a Hen Harrier is dead, and autopsied by experts, it seems a little odd that those experts cannot do better than ‘likely to have been shot’. I’d be surprised if Rowan were smothered to death with a pillow, or bludgeoned to death with an axe but I’m guessing really.

I thought I’d ask someone and spoke to a very helpful person in Natural England who confirmed that Rowan was dead but didn’t even get as far as saying that he was ‘likely to have been shot’. Apparently saying anything else might prejudice police enquiries although the police are asking for the public to phone in any information about this likely crime of a likely shooting.

Is it the weapon that is in doubt perhaps? Was Rowan shot with a trebuchet or maybe a ballista? If you have seen anyone in the Yorkshire Dales NP with either weapon then the police are likely to want to know about it.

Maybe there is clear evidence of shotgun pellets having passed through Rowan’s body breaking bones and tearing flesh but none remains in the body to be X-rayed. That is possible. Usually in these cases we get to see an X-ray but none has appeared in this case. Isn’t that a bit odd? Let’s see the X-ray and see if any of us can spot any pellets.

Let’s hope that there isn’t someone looking at an X-ray with shiny round dots on it wondering what those pellet-like things are.  Could they be shotgun pellets, perhaps? That seems likely. But even if there is, then I guess that it is only ‘likely’ and by no means certain that the pellets entered Rowan’s body by being shot into him. It is just possible that Rowan was playing a game of ‘drop the shotgun pellets’ which tragically went wrong and he immolated himself while practicing a skydance with pellets.

It seems that the Daily Express is pretty sure that Rowan was shot.

And now, today, we hear of another mysterious disappearance, of Tarras. Likely to be…?