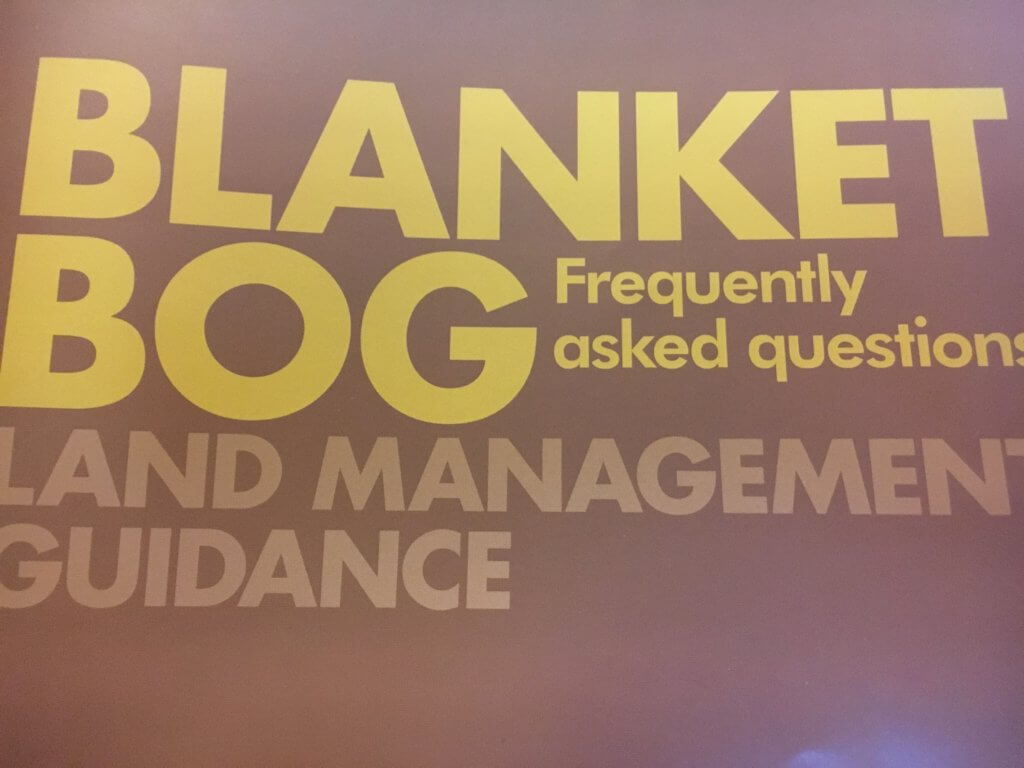 While I was swanning around in Yorkshire on holiday there was an important conference event held in Edale talking about the future of blanket bogs in the South Pennines (although its findings seem equally to apply to the North Pennines and other areas I guess).

Interesting reports reached me of unlikely events such as plates being thrown around, EA staff not being willing to answer questions on heather burning and NE directors having to declare an interest as members of the GWCT but such reports were slightly garbled, incredibly difficult to believe and therefore not worth repeating (at least at the moment).

So I waited to read all about it and I have spent some of the weekend reading through three documents that you can read online; Blanket Bog – frequently asked questions, Blanket Bog – outcomes and improvements and Blanket Bog – decision making toolkit.  I’d recommend the first of these as the most interesting read if you are interested in one or both of ‘protecting blanket bogs’ and ‘banning driven grouse shooting’.

I am genuinely slightly confused as to who has produced these documents as the plethora of logos  and partnership group names is somewhat overwhelming but NE, EA, PDNP, RSPB and a variety of water companies are definitely in there.

It’s quite difficult to know whether you are looking at a blanket bog by looking at the vegetation – you need a walking stick to find out how deep is the peat beneath your feet too.  But when you find one, then do thank it!  Blanket bogs are important for flood management, water supply, carbon storage, driven grouse shooting (!), grazing and biodiversity.

As the FAQ document says (p5) ‘Peatlands in poor condition cannot deliver the full range of these outcomes, are a net source of carbon and are a cost to society‘.  The document doesn’t quite say ‘and management for grouse shooting is a massive problem‘ but it comes very close as it repeatedly points at the harm done by burning and draining blanket bogs and the FAQs are written with a very keen eye on blocking off any escape routes open to the shooting industry partly by knocking on the head some long-lasting rural myths.

This really is about putting blanket bogs back into good condition and the most recent cause of their poor condition is the intensive management of the uplands in pursuit of Red Grouse.

The unwritten message in this document (well, it is written, but in quite small letters between the lines) is that you can have too much of a good thing and that the men in tweed have been producing heather-dominant landscapes so that people can shoot more and more Red Grouse for fun at the expense of blanket bogs which are of value to us all. In other words, that the uplands have been managed for the few rather than the many, and that this should stop.

This is not a new message, it is the essence of the RSPB complaint to the European Commission over Walshaw Moor and a range of other sites (see Inglorious and here) and of the remark by the Climate Change Committee that ‘Wetland habitats, including the majority of upland areas with carbon-rich peat soils, are in poor condition. The damaging practice of burning peat to increase grouse yields continues, including on internationally protected sites.’.

Here are some quotes (but do read the whole thing) which are all about why mosses are good, why too much heather (at the expense of mosses) is bad, why heather burning is often bad, why cutting is good and how wildfire risk is increased by rotational burning:

There’s lots more stuff in these documents!  But the focus on blanket bog restoration is firmly on grouse moor management techniques and not on farming.

The GWCT can simply pulp the large piles of their Bluffer’s Guide to Moorland Imbalance (see here and here, and also here) and hand out the three documents above to their members instead.

It remains to be seen whether NE will really dig their heels in over burning consents or whether they will cave in to grouse moor managers, or allow other damaging operations such as building tracks all over our hills as a quid pro quo for properly controlled heather burning.

It also remains to be seen whether NE will revoke permissions to burn blanket bogs given to grouse moor managers since Walshaw Moor and since the 2010 general election.  How many of these are there? Loads!  How long do they last? Ages!

And what are the chances that you and I will end up paying for blanket bog restoration – where is the polluter pays principle when you need it?

But – this is progress on paper. Slow though isn’t it?

2 Replies to “Ban the burn on bogs”