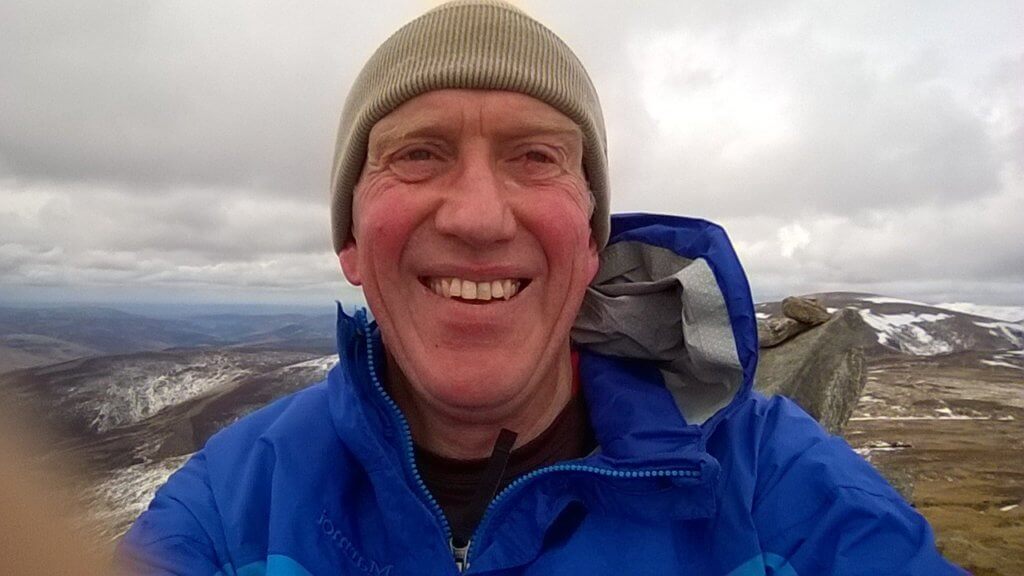 Previous blogs here by Bob; Peak District paths, 13 February 2017; More from the Peak District, 16 February 2017. He has also supplied numerous interesting photographs demonstrating the type of management that goes on on grouse moors.

The RSPB complaint to the EU about blanket bog management has resulted in land management guidance published by a collaborative called the Uplands Management Group which includes Moors for the Future (MFF). There is a significant overlap with this initiative and Flood Management Plans for Sheffield and other areas. At the time of writing, DEFRA have not published their formal response to the complaint.

Natural England will not issue any further consents for rotational burning on blanket bog and the restoration work undertaken by MFF is praised by all. So apparently we are entering a new era of responsible moorland management which will benefit us all. But those blog readers familiar with Driven Grouse Shooting will know that the public message is very different from the reality on the ground and I will show what has been happening over the last few months, how taxpayers’ money is being spent and what we can expect in the future.

Uplands guidance will not be implemented until new management plans are in place. You might think responsible landowners would embrace the new regime for the benefit of all, instead we have seen a huge increase in moorland burning.

MFF organised the Bogfest conference in September 2017 but unfortunately the Environment Agency, Natural England and leading academics all refused to discuss the effects of moorland burning. Professor Tim Allot told us how Glossop was safe from flooding because of the moorland restoration work above the town and we even saw a Google Earth image to prove it. Tim must drive up the A57 with blinkers because right next to the road on Hurst Moor extensive burning has resulted in what can only be described as large scale habitat damage.

MFF are putting huge effort into telling us the importance of sphagnum and are spending millions of pounds so these mosses can flourish on our moors. So why are landowners allowed to damage sphagnum like this, also on Hurst Moor?: 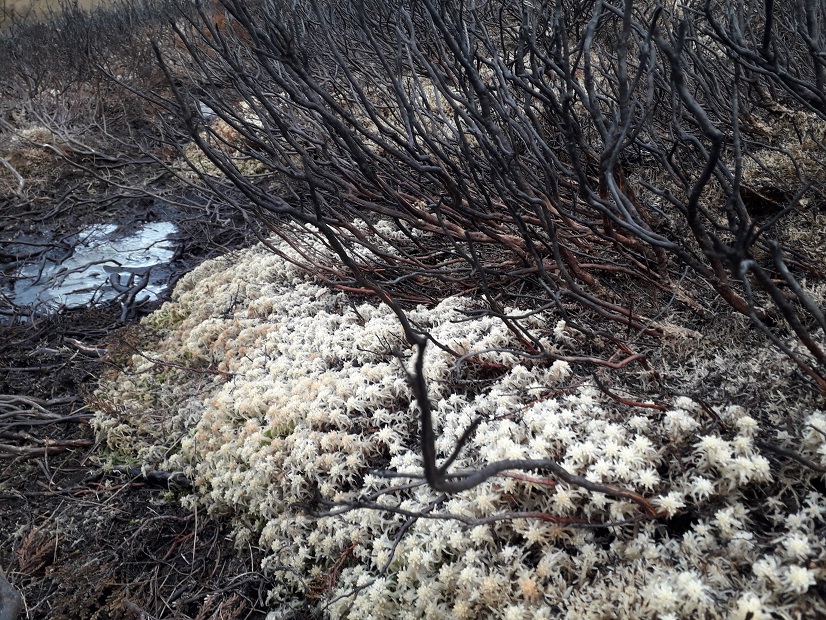 The Environment Agency-led scheme to protect Sheffield from flooding now has projected costs of £100 million. This must be equivalent to the turnover of the whole of the grouse shooting industry in the North of England. Yet none of the statutory agencies involved will tackle the five landowners in Sheffield’s Upper Don Catchment to ensure these uplands are managed to minimise the risk of flooding in Sheffield. Instead we see vast sums spent on restoration to create sphagnum and wetter moors alongside subsidised burning of sphagnum that dries out the moors. Over a two year period Moscar estate received £349,000 for moorland restoration and £292,000 in High Level Stewardship payments to support environmentally beneficial management practices. The area in the photo below was, prior to burning, pretty much an ideal mix of sphagnum, heather and cotton grass to create active blanket bog and it has been severely damaged by publicly subsidised burning. 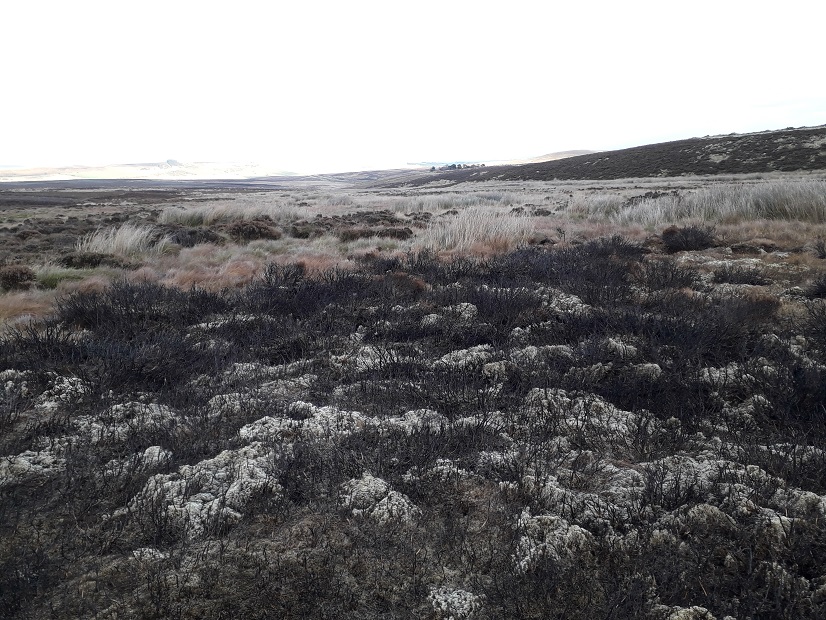 Who has responsibility to determine the best management for the public good? Natural England is the statutory body with powers to enforce changes in land management. But I have been told that ‘Neither flood risk or water quality fall within the remit of Natural England‘. The Environment Agency is the statutory body that is partnering Sheffield City Council in the flood management scheme and the Environment Agency tells me ‘Our remit does not include land management practices‘. So the two key statutory bodies both deny any responsibility in managing the uplands for the benefit of Sheffield.  If it isn’t either of their jobs to ensure that land management reduces flood risk then whose job it is?

Sheffield Councillors support moorland regeneration in the belief that it will keep the floodwaters in the uplands. But how much of this land will be restored with an accompanying ban on burning? First of all there is a major loophole in the proposals that allows ‘restoration burning’ – that is one final burn before restoration work commences. Given a common ten-year rotation it looks like burning will continue as before for many years to come.  There is also a loophole to allow burning to create fire breaks, which is ironic. Recent pictures of burning which featured on this blog resulted in a site visit from NE. Five other estates with probably more severe burning didn’t have the honour. Two NE staff experts declared that the burning was on Dry Heath not Blanket Bog, in other words on soil of depth less than 40cm and/or mineral soil, not peat.  However, I checked peat depths over a 500 metre transect with at least 10 measurements, and this showed that this is degraded blanket bog.  I reported these measurements to NE. 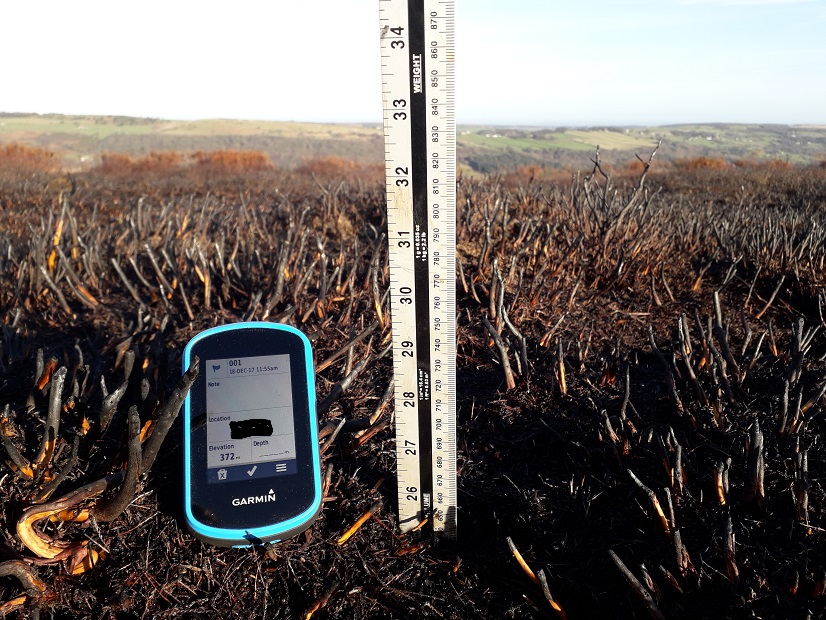 In other words peat depth more than 40cm, low water table, little moss and predominant heather. Even without the burning, uplands management guidance tells us that carbon is lost from this type of habitat and it’s important to restore hydrological functionality (re-wet).

Classification of habitat here is based mainly on “ESA habitat maps” derived from vegetation type, not peat depth. Given that 100 years of burning has dried these uplands and created a heather-dominated landscape it’s likely that much of this area is misclassified. The SSSI units in the Upper Don Catchment are listed as 50% Dry Heath by area. Regardless of Blanket Bog guidance half of this catchment will see continued burning. Water flows are reduced by good hydrological function and a surface of moss and rough vegetation – the opposite of the burnt landscapes below. 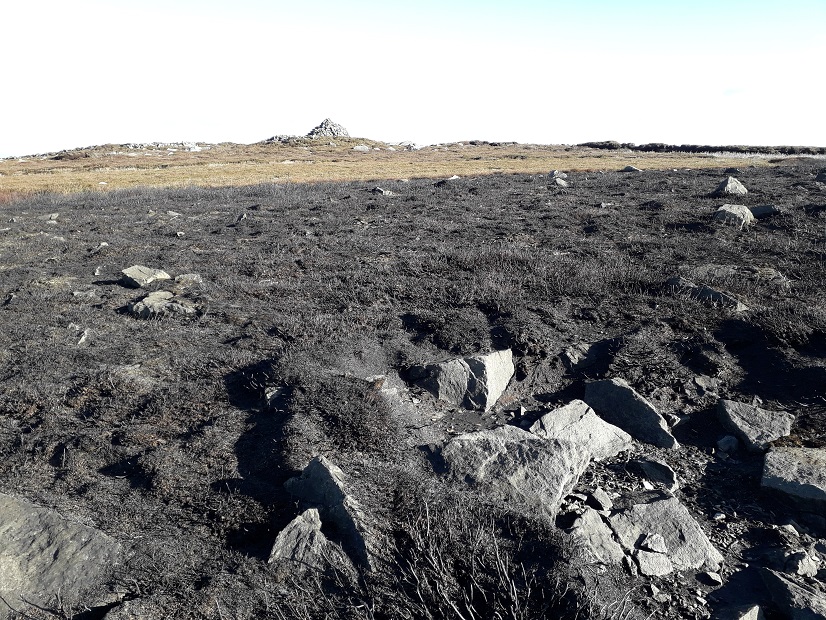 This (above) shows a very thin layer of peat above a rocky slope at Pike Lowe summit. No doubt this is classified as Dry Heath. Some of this peat will be lost from water damage when it’s wet and more peat will simply blow away when it dries out. A few more cycles of burning and we will be back to a bare rock slope. I fail to understand how a landowner considers this to be good long term management. 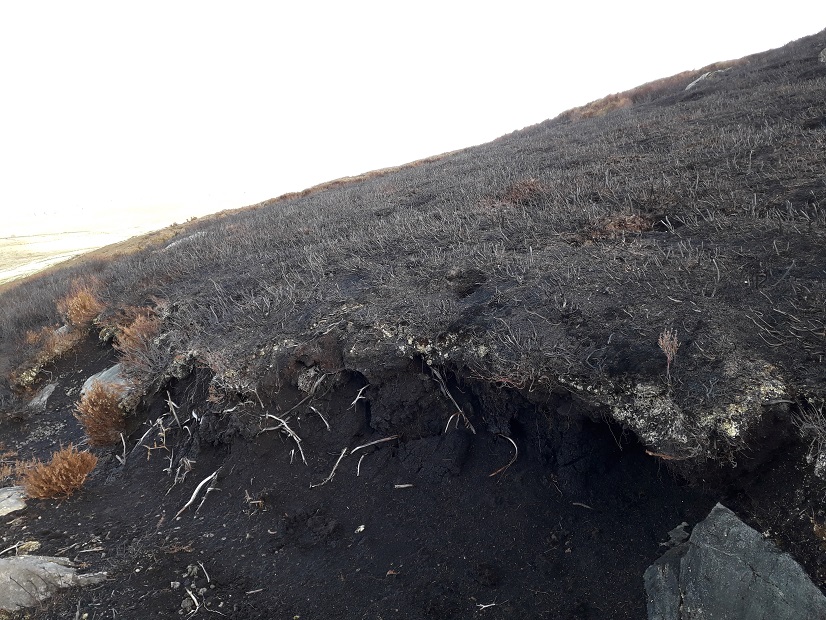 A couple of hundred metres away peat depth is at least one metre (see above). This slope is so steep it shouldn’t be burnt at all and is eroding. The burning is of such severity to leave no vegetation cover at all. To my eyes this is clearly non-compliant with the burning code but it didn’t even warrant a NE site visit.

Finally, much is made of landowners blocking grips and gullies to re-wet the moors. Fitzwilliam Wentworth Estate were paid £586,000 for moorland restoration, of this £310,000 was for grip blocking on difficult sites. As the photo below shows grip blocking is at the landowner’s discretion. This drain is ten metres from a surfaced track (surfaced without consent from Natural England or Peak Park), so it can hardly be described as difficult. Of course if the grip was blocked it would likely flood the shooting butts and wash away the road. To add insult to injury there is a fifty metre wide fall of shot strip which has been burnt down to nothing and this is allowed  in the management plan. Never mind the flood risk or carbon release, this perfectly illustrates the conservation priorities for these uplands. 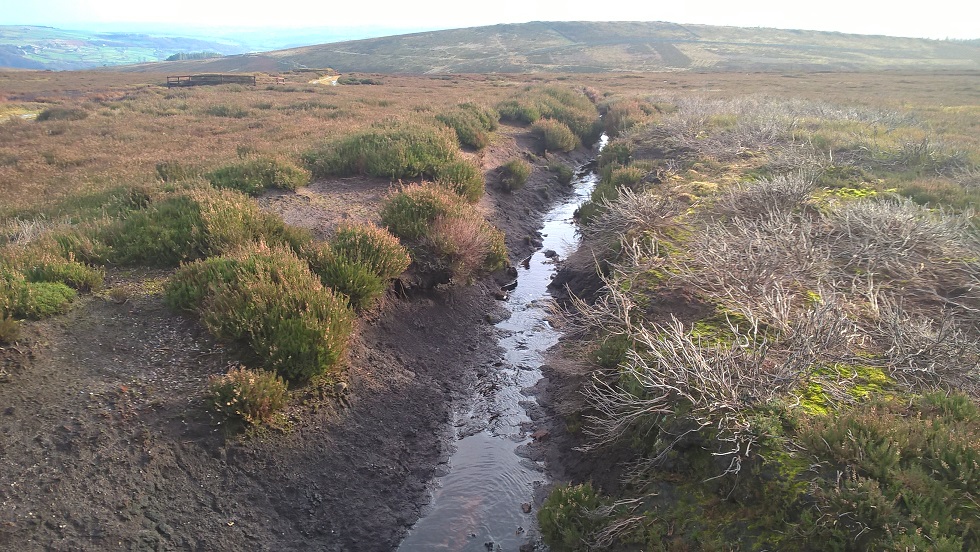