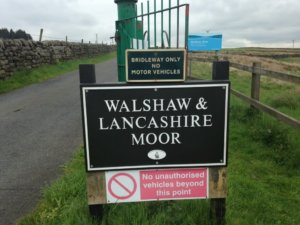 The Moorland Management Plans (MMPs) for places such as Walshaw Moor are largely a response to the complaints to the EU Commission by the RSPB and the Hebden Bridge ‘Ban the Burn‘ campaigners (Hebden Bridge sits below Walshaw Moor in the Calder Valley) over the nature and scale of burning of moorland on grouse moors.

It’s surprising that Defra has not announced how it is responding to the complaints – but it is clear that these MMPs are the main response.

The UK (or would it be just England?  I’m not sure (see note at bottom of post)) would have faced large fines for widespread breaches of the Habitats Directive if Defra and NE had not moved to change damaging burning practices. And that is why NE has been negotiating these MMPs which contain revocation of the existing burning consents on areas of deep peat and why NE no longer consents rotational burning on blanket bogs. It’s odd that no-one has announced all this news but perhaps it is because the EU complaint is not finally, finally resolved, and/or perhaps it is because Defra and NE are a bit shy about the fact that they have been caught out having allowed habitat damage through unsustainable managment for grouse shooting over tens of thousands of hectares for many years which would have continued into the future if the EU had not been prompted to intervene by the RSPB and ‘Ban the Burn’?

Clearly the Moorland Association will soon have to update its website to mention this major trashing of the environment and GWCT will have to pulp its large pile of unsold copies of Moorland Imbalance.

As Bob Berzins wrote this morning, you might think ‘…we are entering a new era of responsible moorland management which will benefit us all. But those blog readers familiar with Driven Grouse Shooting will know that the public message is very different from the reality on the ground‘.  Bob’s images of moorland burning in the Peak District are pretty shocking but the Walshaw Moor ‘Catchment Restoration Plan’ is another example of how NE is attempting to please their friends the grouse shooters and do as little as possible for nature cosnervation.

NE has revoked permission for rotational burning of blanket bogs – which should never have existed in the first place (and read Bob’s Guest Blog on the misclassification of areas of deep peat as Dry Heather which should be classified as Blanket Bog) and were never properly policed by NE which is the regulator in this area.  However, it appears that as a quid pro quo for the need to ban unsustainable burning of blanket bogs NE has not only thrown in a few tracks as sweeteners but also left so many loopholes in their plans that burning may well continue more or less as before.

Read their MMP (confusingly called a catchment restoration plan) and you’ll see that the Walshaw Moor Estate can carry on burning heather for the purposes of Heather Beetle management (despite the fact that evidence for efficacy of this in dealing with Heather Beetle is meagre according to NE’s own evidence review) which will, over time, cover most if not all of the heather area. This is not so much a loophole but a gaping hole – and for no scientifically rigorous reason.

Then there is this thing called ‘restoration burning’. I’d never heard of restoration burning until about two years ago, but then I have lived a very sheltered life, and every time I asked people what it was either they didn’t know either or they told me it was a ruse by the moorland owners to carry on burning blanket bogs as much as they liked! Has anybody got a better definition? I was told over a year ago to regard MMPs as SLDs (sordid little deals) and so I have been looking forward to their arrival immensely. 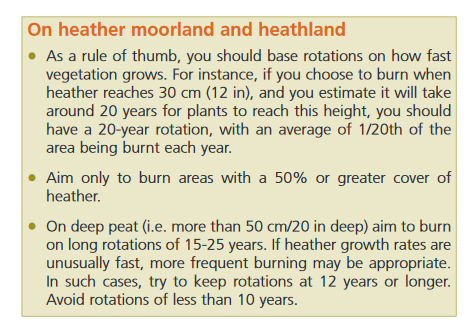 So, on blanket bogs, aim to burn every 15-25 years and only burn areas with >50% heather cover.  Isn’t it odd that the Walshaw Moor Catchment Plan (p17 – the amber section) suggests that burning is OK on areas of heather as low as 20% cover even where there is evidence that the bog is recovering and becoming more active? Our statutory nature conservation agency has signed off a plan by a  grouse moor estate which allows, indeed encourages, burning of blanket bog under conditions that are more relaxed than the existing code of practice.  That’s quite a response to being caught allowing too much burning of blanket bog!!

The EU Commission may not be thrilled to see how Defra, NE and the moorland owners responsible for attracting the EU Commission’s attention in the first place have produced a plan of action that will allow the damaging operations to habitats of European importance to continue and increase as their response to the Commission’s intervention.  Let’s hope that the Commission or Michael Gove himself, intervenes to put this right before we see the same nonsense rolled out across scores more estates all over the north of England.