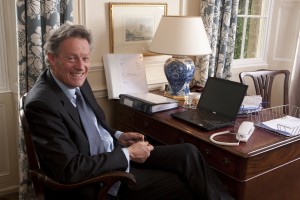 The new President of the CLA is Henry Robinson – well, he’s no longer that new, he’s been in post a couple of weeks.

I’ve always liked Henry (though I don’t know him that well – maybe I’m too quick to like).  Anyone who I occasionally meet at Cheltenham racecourse starts with a slight advantage in the ‘liking’ stakes.

Henry doesn’t have that far to travel to the races at Cheltenham, he farms his 1000 acres of wheat and oilseed rape nearby.  His land, at least some of it, is in HLS, he has been involved with FWAG, he was Treasurer of the National Birds of Prey Trust, and he is described, and I can believe it, as being committed to conservation.

He’ll be just the right type of CLA President to be in the job when Labour come back into ‘power’ in 2015.

The CLA has 34,000 members and they must own quite a large chunk of the country between them. Less strident, more urbane, and only slightly less effective than the NFU at getting their way, this is a force to be reckoned with.

The CLA, although often wrong-headed, is at least consistent and somewhat principled in its lobbying.  Through sound policy advice in the past it has stuck to a few Tory principles of faith in the market, letting people (particularly the people who own land) get on with it, removing red-tape and taking a long-term view. CLA members are likely to talk about ‘stewardship’ more often than are NFU members.

CLA Presidents are traditionally, and tradition is important, seen to issue lots of press releases in their first few weeks in office just to tell the world, and the world of the CLA, that they are around and working very hard.

Henry has opined on cutting red tape, flood liability, biodiversity offsetting, reform of compulsory purchase, the threat of climate change and the importance of Warfarin in the war against Grey Squirrels so far.

I wish him well.  I wonder who the NFU will choose as their new President – Ladbrokes don’t seem to have priced it up – but my money would be on someone with a difficult to pronounce Welsh name (or at least, it’s easy to pronounce, but everyone seems to have their own version of it).  How Henry and Meurig (if it is him) get on is of some importance in how the farming/land-owning views get put across. For some time, CLA Presidents have been in the shadow, or somewhat overshadowed, or slightly eclipsed by the outgoing NFU President, Peter Kendall.  Maybe it’s time for the CLA to take back the leading role.

Do remember to vote in the poll to pick the Westminster MP who did the best job for wildlife in 2013.  Voting started yesterday and has already attracted over 700 votes.