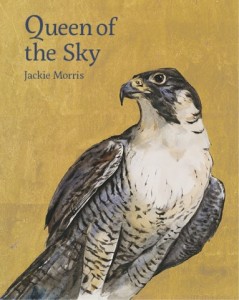 This is another book that I approached with some hesitation. It’s the story of the rescue and rehabilitation of a Peregrine that fell into the sea between the Pembrokeshire coast and Ramsey Island.  I wondered whether it might be a bit soft and fluffy for me – but it wasn’t.

This is a celebration of a species through the story of an individual. The story of  how a wild bird – perhaps one of the wildest of birds – was brought back to health and then released back into the sky to be wild again.

The details of the process are interesting but it is the emotional bond that grew between the human and the bird that makes the story. The two grew to trust each other but the endpoint was always to be that the bird flew away and the person was left with a feeling of loss as well as satisfaction.

There are numerous photographs and drawings. The photographs show the outside of the Peregrine, named Hiss, but the illustrations show you something of her inner personality.

This is a short tale about wildness. The Peregrine parked a little of its wildness in order to regain its health  but she was always wild. It’s not a soft story at all  I liked it.

Queen of the Sky by Jackie Morris is published by Graffeg.

Inglorious: conflict in the uplands by Mark Avery will be published by Bloomsbury at the end of July.