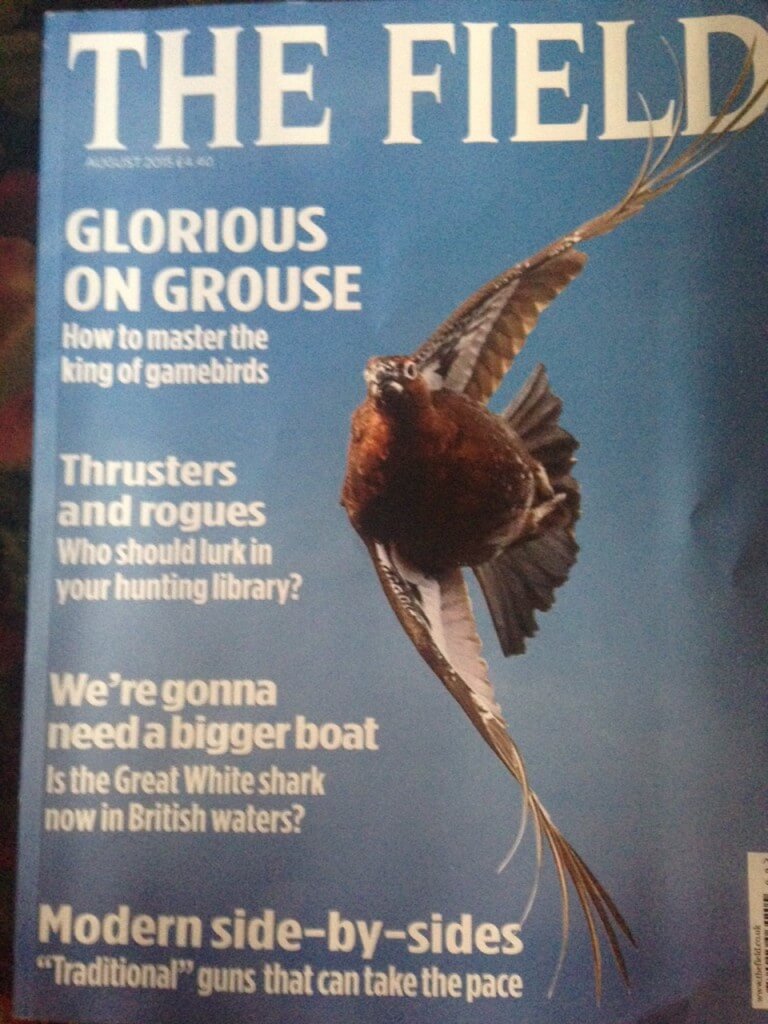 Whereas Birdwatch magazine has a ringtail Hen Harrier on its cover this month, The Field has a marvellous image of a Red Grouse on its cover. Don’t you just want to…errr…shoot it?

As a graphic example of the crisis of confidence in the British grouse shooting industry, Max Hastings calls on readers of The Field to rally around the G(W)CT because a ‘shamefully small proportion’ of shooters contribute to its coffers. And yet Sir Max and The Field get the G(W)CT’s name wrong four times in five mentions! Clearly not an organisation that is front of mind even in the shooting industry, or maybe just a reflection of the attention to detail we might expect from these folk?

At first mention, Sir Max and The Field call this well-known organisation the Game Conservation and Wildlife Trust, which isn’t a bad name for them (apart from the word ‘Wildlife’, but is wrong) and then abbreviates this to (GWCT) which is right. All subsequent mentions use ‘GCWT’ – a bit embarrassing.

According to Mad Max, sorry, Sir Max, the TCGW does ‘top-class science’ which suggests that he doesn’t pay that much attention to the ranking of science of different organisations – see here.

He also says that grouse shooting is ‘…wholly dependent on the GCWT’s (sic) work to make the sustainability argument, which alone can prevail in a hostile social and political climate‘.  Now, to be serious for a moment, Sir Max has a point here. Somebody should be making the sustainability argument on behalf of grouse shooting, but, actually, nobody is! Certainly not the WTCG.

Sir Max, in a thoughtful opinion piece, which, (now I am being serious) is well worth reading, suggests that banging on (not the phrase he uses, but a good one) about personal freedom and that man is a natural hunter might not be the best way to speak up for shooting. He’s right there on the latter, but the former is actually an important point with wishy washy liberals such as myself. It is largely because of the bad behaviour and intransigence of the shooting community to clean up their act (not complying with the existing lead shot ban in shooting wildfowl, opposing a wider lead ammunition ban with invective rather than argument, killing our birds of prey and trashing the uplands with over-burning) that many of us wish to see an end to one particular form of shooting – driven grouse shooting.  With freedom comes responsibility to act in a socially acceptable manner – driven grouse shooting is falling down badly on that score.

My book, Inglorious, makes the case that driven grouse shooting is an anti-social and ecologically damaging industry and that is why it should be banned.

It’s not as though the WCTG has made any sort of case for continuing to use lead shot (but then it hasn’t said much about it at all), instead its Chair, not one of the organisation’s top scientists, sat on the Lead Ammunition Group and then ran for cover as its report was finalised.  We might see TWCG criticising the Lead Ammunition Group’s (soon to be published) report, but I doubt it will be on scientific grounds and led by a scientist because the WGTC had five years to make those points and didn’t. We’ll see.

It’s not as though the CGTW has made any response to the Committee on Climate Change’s recent statement that ‘The damaging practice of burning peat to increase grouse yields continues, including on internationally protected sites’.  If we are talking sustainability, then this is a highly damaging statement to the British grouse shooting industry from an authoritative source. The CGTW’s response has been…shhhhh…silence.

It’s not as though the WTGC has responded to last year’s report from Leeds University on the widespread damage done to aquatic wildlife, water quality and flood risk by burning for driven grouse shooting. If driven grouse shooting is truly sustainable then how come it is damaging these ecosystems?

I’m afraid, Sir Max, that if you are relying on the CWTG’s defence of the sustainability of driven grouse shooting then you’d best enjoy your shooting while you may because your sport is doomed because the industry that supports it is unsustainable.

More from The Field later today…