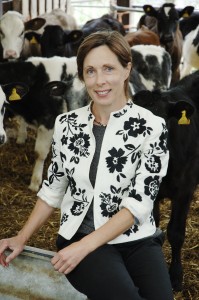 Professor Christine Nicol obtained a degree in Zoology from the University of Oxford, and then completed a PhD on the welfare of laying hens. This led to her involvement with many committees and working groups that oversaw the European ban on battery cages in 2012. In 2012 she was awarded the UFAW Medal for outstanding achievements in animal welfare science, and in 2015 she published her book The Behavioural Biology of Chickens. Her interests in animal welfare extend beyond chickens to other species both domestic and wild, and even, in her latest venture, to alien creatures on other planets……..

Would You Eat an Alien? (4 programmes, BBC Radio 4, starting on December 9th at 21:00, and available online even now) is an attempt to encourage people to think about animal welfare and animal rights without at any point telling them what to think. Brilliantly produced by Mary Colwell, and with great comic interludes by Jake Yapp, my task was to develop the content, interview great minds, and develop an engaging narrative.

Jake takes on the role of a sensitive-spaceman who crash lands on an earth-like planet just as the last of his biscuits run out. Awaiting rescue, he discovers a variety of carbon-based life forms that could provide him with sustenance. Although the plant-life is inedible, candidates for dinner range from simple blob-like sponges to complex social beings. Guided by his own instincts, and backed up by an inter-galactic rule book tucked into his back pocket, he attempts to find food whilst causing the least amount of harm or distress. Tricky dilemmas develop over the course of the 4 programmes and Jake constantly seeks advice and reassurance, phoning me frequently (please suspend your disbelief!) to ask how animal welfare scientists and ethicists might approach the situations he faces and to update the audience with vignettes about the creatures he encounters.

The first programme touches on the complex philosophical and unsolved scientific issue of animal sentience – in this context, whether animals (or aliens) have the capacity for conscious experience and feelings. Given the complexity of this topic I had originally thought we could skirt neatly around it, but it became impossible to ignore, and so we dug right in. Much of the first programme therefore considers the capacity of fish to feel pain, a topic where arguments are polarised, and the implications either way are enormous. Although Jake’s patience (and intellect) are somewhat stretched by these deliberations, he concedes that he may be dealing with sentient beings and we move on to consider the welfare implications involved in catching and killing his dinner. Given that the programmes go out over Christmas, graphic detail (and all mention of turkeys) is avoided, but the concepts of a good life and a humane death are gently introduced. Just when Jake’s decision seems easy, he is prompted at the end of programme 2 to consider some further implications of his actions. It appears that some of the alien creatures live in social groups. By programme 3 Jake has to consider how killing one might affect its remaining companions. And in the meantime, Jake himself is becomes rather fond of one particular individual……….. a device that allows us to explore the different labels we allocate to animals (pest, pet, food, wild) and how these labels influence our attitudes and relationships.

Towards the end of the series Jake is thrown another curve-ball and asked to consider whether any of the creatures sufficiently person-like that they should not be killed at all. Where does a concern for animal welfare turn into a concern for animal rights? Some truly world-class scientists, philosophers and lawyers have contributed to these programmes, building a series that cuts across academic disciplines. Too often philosophers talk about animal ethics as if all animals have the same moral standing. In this series, the biology of the alien creatures is central, and the different concerns of sentimals (sentient animals), socimals (socially bonded animals) and planimals (animals with some awareness of their own future) are exposed for debate. At the very end, Jake is left to make his own life or death decision, leading to an outcome that the production team found emotional, bittersweet and thought-provoking.

Many issues were outside the scope of these programmes but will surely be raised by listeners – the implications of eating meat for human health or for climate change, the cultures and traditions that have developed alongside farming, the synergies and conflicts that can exist between an ethical approach focussed on individual animal welfare and an environmental ethics that is more concerned with species and ecosystem survival. We don’t even attempt to answer the important question of whether most of the animals we eat have in fact led a good life and experienced a humane death. We hint at the concepts, but do not present the audit. With any luck, that may come next.