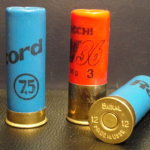 It’s apparently GB Game Week (#GBGameWeek) where the shooting industry tries to persuade us all to eat game meat.  Although I am veggie for four days a week, the freezer has quite a lot of venison in it – and very enjoyable it is too.  But I know where that venison comes from, it’s shot in Scotland and with copper bullets – there is no chance of there being anything other than traces of toxic lead in it.

I’m surprised that our forestry services, in Scotland and England, don’t market their venison quite aggressively as ‘lead-free’ or at least shot with ‘non-toxic’ ammunition. This would

help differentiate the market and give choice to consumers.  Venison is at the lower end of lead content even when shot with lead bullets because deer are big, they are often shot in the head and those two things mean that the tiny shards of lead that spread through the carcass (that’ll be meat when it lands on your plate) don’t get to every part of the animal.

But small game – Pheasants, partridges, Red Grouse and ducks are different. Shot with pellets, the pellets, if lead, deform as they pass through the flesh (that’ll be meat when it’s on your plate) of the animal and shed tiny shards. And pellets that hit bones do even more of this.  The lead fragments are tiny – you can spit out the whole pellets but you’ll not notice the tiny fragments, but they are there as X-rays show, and they are lead, and lead is a poison.

Lead isn’t good to fling around the environment or to ingest – which is why many countries already, and the number will grow rapidly over the next few years for sure, are restricting or banning the use of lead ammunition in hunting, particularly if the quarry enter the human food chain.

There’s a big literature on the subject (see here, here and here just for starters).  The first of those links goes to a report produced in 2015 for Defra which recommended the phasing out of lead ammunition on human health and environmental grounds but the utterly hopeless Liz Truss sat on the report for a year and then rejected it while David Cameron was resigning as Prime Minister – a case of a good day to bury ridiculous government decisions?

So, this week is GB Game Week where we are all encouraged to scoff game meat – and the shooters, and most of the restaurants selling game meat, and the posh chefs selling game cookery books, won’t ever mention lead in the food you might be tempted to eat.

They also won’t mention the Food Standards Agency advice which can be found here and which warns against eating too much lead-shot game meat.

Rather strangely though, the FSA isn’t reminding people of its advice on not eating too much game meat in GB Game Week despite the fact that their advice is very rarely accessed by the general public. Why not? Might it be because the chair of the FSA owns a grouse moor?  And funnily enough, Mrs Hancock’s husband’s grouse moor is reported to be the the location on which a Hen Harrier disappeared recently.  Small world isn’t it?  Other explanations are available but it doesn’t look very good when the government’s food agency remains silent about toxic ammunition in food at a time when the shooting industry is ramming it down people’s throats – does it?

15 Replies to “Silence from the Food Standards Agency”