I’ve done my bit for Butterfly Conservation this weekend and carried out a Big Butterfly Count in the back garden. 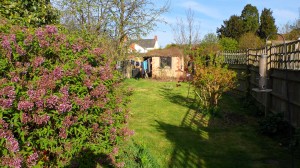 This very serious survey was postponed as when the rain fell this morning I nipped in to Waitrose in Rushden to stock up on cheap white wine and found that my local Waitrose store was giving me another opportunity to help butterflies.  As you leave the store you are given a green plastic token which you can put into one of three boxes representing local good causes.  At the moment one of these is Northamptonshire Butterfly Conservation and so they got my token.

That’s a form of democracy in action – I wonder when the government will adopt a similar approach to deciding public spending?  War in Iraq or habitat recreation?  Pillar 1 payments or reducing student fees? MPs’ pensions or my Mum’s pension?  Badger vaccine or badger cull?  Still, that’s just a dream.

Richard Ingrams is just a nightmare though!  Although I was told today that I might be turning into an Ingrams-like grumpy old man.  Grumpy? Old?  In yesterday’s column in The Independent Ingrams mentioned the Big Butterfly Count and said he’d rather count butterflies by squashing cabbage white caterpillars in his garden than counting adults.

And that’s exactly why he should get out and do that count today or over the next couple of weeks.  There is no such thing, or there are perhaps three such things, as cabbage white butterflies.  And whereas he says, in different words, that the errors of counting that he might make in his garden would be compounded if lots of us were doing similar things he is wrong about that – at least as far as inaccuracy is concerned.  The more the better – Mr Ingrams’s over-counting will be compensated by my, or your, under-counting this year.  And if we both do it again next year then the changes between years will be pretty comparable.  At least that’s the theory and it is backed up by some real statistical theory too.

I had to look fairly closely at the white butterflies in my garden to work out if they were Small Whites, Green-veined Whites or Large Whites and I’m sure that Mr Ingrams would benefit from doing the same.  They were, I’m pretty sure, all Small Whites and there were a couple of Gatekeepers too.  No doubt if I nip out later this afternoon the garden will be full of more interesting and rarer species, but that is the fate of many a citizen scientist – or at least it often seems so.

Being in the garden I admired the potential bumper crop of apples on our tree but looked sadly at the number of them already windfalls on the floor.  The best preserved were collected for apple jelly production.

Having got into the mood for looking at insects I saw a few hoverflies and noticed quite a few Cinnabar Moth caterpillars at the end of the garden.

The Big Butterfly Count is well worth doing for the fun of it – it’s only 15 minutes – and because David Attenborough supports it and Richard Ingrams decries it.