On Tuesday I spent several hours in the rough but didn’t have anything to complain about.

I don’t know Fife that well and enjoyed being shown around by my host for this trip (of whom, more, probably, later).

We looked in at the Eden Estuary and admired the seals as a whimbrel flew up the estuary calling but invisible to us.  Gannets passed by offshore, occasionally diving with a distant splash.  We passed the St Andrews cafe where ‘Kate met Wills (for coffee)’ and the beach where the Chariots of Fire’s athletes ran along the strand.

We also passed the Royal and Ancient Golf Course, familiar from the TV, where many a good walk has been ruined in a Twainian manner.

But it was to another, less famous, golf course we headed – to Fife Ness.  There we met Dr Jim Cobb at his ringing hut set amongst the patch of trees and scrub that he created from scratch on the edge of the golf course. 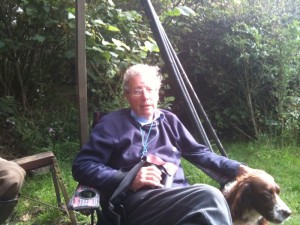 When we arrived Jim was measuring and examining the first of several willow warblers that passed through his gentle and experienced hands as we talked about windfarms, SNH, other birders and ringers, the BTO, falls of migrants and how he had established this site.

Since first visiting the site in October 1965, Dr Cobb has planted around 20,000 trees at the end of Fife Ness to create a haven for lost birds and a site to study bird migration.

We agreed that bird ringing is sometimes practised as a bit of a field sport with numbers being the aim and science being the excuse.  But that is not Dr Cobb’s style – he talks about the retrappability of willow warblers (for how long are they net-shy?) and his view that many migrants, even during large falls of migrating birds when the bushes and trees are full of Scandinavian blackbirds, thrushes or warblers, pass through quickly.

As we sat in the sun talking of birds, Dr Cobb’s co-ringer, Mark, identified a rosefinch which perched conveniently in view for a few minutes but didn’t conveniently appear later in a mist-net shelf.

The rosefinch, formerly known as scarlet rosefinch, now more commonly called common rosefinch, is a good August bird on the east coast of Britain. Scarlet it is not at this time of year, and anyway this one was a bird of the year and has yet, if male, to grow a single scarlet feather.  Common it is not either – it’s an unusual sight but there must be quite a few overlooked because it could be called the ‘rather dull-looking streaky rosefinch with a couple of weak wingbars’.

After a brief pause for rosefinch we resumed talking.  This site is best in southeasterly winds when migrating birds from the continent drift across the North Sea and plunge gratefully into the cover provided at Fife Ness, next to the bare greens of the golf course.  15 May and 15 October are the days most likely to produce exciting numbers and varieties of migrants.

Many rarities, much rarer than ‘our’ rosefinch, or the whitethroat now being ringed, have graced this spot with red-flanked bluetail, Radde’s warbler, Blyth’s reed warbler and Sardinian warbler being some of the most notable.

The conversation moved through the misdemeanours of Dr Cobb’s academic colleagues, the price of bird rings, growing your own food (which Dr Cobb does in his extensive and attractive gardens which he later showed me), how to talk to Australians, Heligoland traps, this year’s butterflies and a range of other topics that moved away from birds but always returned to them as a goldfinch was ringed or a willow warbler called nearby.

And it’s not just migratory birds that drop in here – Dr Cobb has 6000 golf balls at home.  The conversation went very easily as I passed a smooth day in the rough.