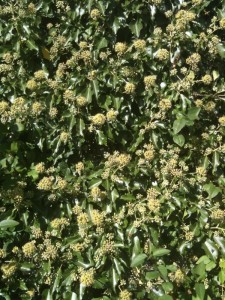 This is the ivy in my garden – it was buzzing with hoverflies, flies, wasps, ladybirds, a red admiral and spiders yesterday.

I like looking at ivy at this time of year – in the sunshine – as it attracts lots of insects.  And it’s worth a careful look – the more you look the more you see.  There’s an attractive patch of ivy where I’ve been working recently and I had a very quick look at it one day in the week – there was a red admiral sitting in the sun.  But, as I looked, I noticed that there were several red admirals, all looking gorgeous.  And there were two small tortoiseshells too.  And a hornet, and lots of honey bees.  But eventually I saw nine red admirals sunning themselves before I needed to go back to work (very pleasant work though it was).

And this autumn seems to be an autumn of chiffchaffs.  I hear them everywhere I go.  It started at the Bird Fair where each morning I entered there was a chiffchaff calling from the same bush and they seemed to be everywhere, but they have stayed with me ever since.

This year chiffchaffs seem like apples – my visit to the ivy at home was en route to picking some apples which are more numerous this year than any of the 13 autumns we have spent in this house; whereas willow warblers are like blackberries – still present but thinner on the ground than usual.

But as I looked at the ivy, there were no house martins calling above me, instead three siskins flew over.

At least that’s what’s happening in my autumn.  How about yours?