The sedge warbler has a stuttering song – it starts – it stops – it starts again – it speeds up – it slows down – it trills – it chatters – it clicks and it churrs. It sounds like a mechanical toy which has been wound up and explodes into song until it runs itself down.  And it’s back in the reeds of my local patch of Stanwick Lakes in east Northants.

There were two of them singing yesterday morning and there were none the day before as I covered the same ground.  From now on I will hear them on every visit through the summer into July and August although they’ll calm down towards the end of the summer and sometimes I guess they’ll be there, lurking in the reeds or the bushes, but not singing, and not seen by me.  In fact I see in the 2010 Northants Birds report that sedge warblers are caught in mist nets right into October which is long after I stop seeing them – aren’t birds sneaky?

I welcome the return of the sedge warbler – it’s another element of spring that is now in place.  What will be next – the cuckoo? whitethroat? yellow wagtail?  I haven’t yet seen a house martin – they must be due around now.

Thanks to the wonderful Birdtrack I can look at the dates on which I first saw sedge warblers at Stanwick Lakes over the last few years and I find them quite interesting. Obviously I don’t visit the site every day through the spring but my visits are quite frequent and my first sedge warbler dates at Stanwick look like this:

They not only sound as though they are clockwork but they arrive as if by clockwork – some time in the 11-day period of 7-17 April, and there is just a hint that they are now arriving earlier than they did only a few years ago.  Maybe climate change is winding their clocks up a bit tighter each year?

Looking at my records, I’ll have to wait a while for the reed warblers to add their voices to those of the sedge warblers – 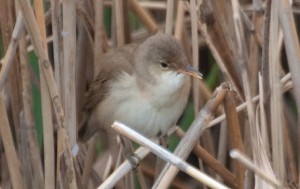 they never beat the sedges back, and a draw is very unusual.  No, they’ll add their less staccato songs to those of the sedge warblers around St George’s Day – but I’ll let you know if that’s right.

Reed warblers seem less excitable than sedge warblers.  Their song is more melodic but also more even-paced – they chunter on in a musical way rather than chatter up and down like sedges do. But I think I’ll have at least a week of enjoying sedge warbler song before i pick out the first more melodic tunes coming from the reedbed which will be another turn of spring’s ratchet.